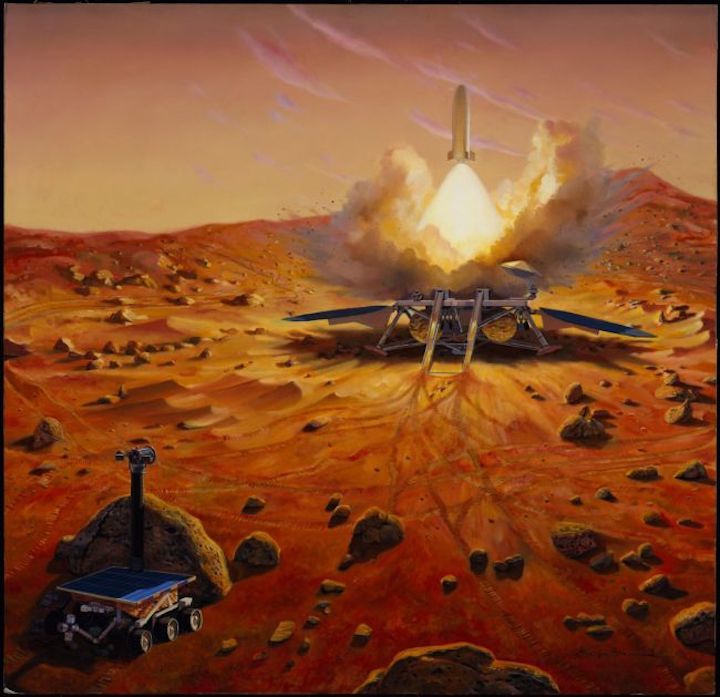 An artist's depiction of a Mars sample-return mission.
(Image: © NASA/JPL)

WASHINGTON — Scientists studying Mars have wanted pieces of the Red Planet here on Earth for decades, and they are finally getting their shot at designing a mission to acquire such souvenirs.

The Apollo program's legacy of carefully collected moon rocks here on Earth reshaped the science of the moon and Earth alike. A Mars sample-return missioncould offer the same sort of potential, but the Red Planet is a more daunting target than the moon. More daunting but well worth the effort, Brian Muirhead, who is leading the effort to develop a Mars sample-return mission at NASA's Jet Propulsion Laboratory in California, said in a presentation here at the 70th International Astronautical Congress.

"It's the consensus of science community today," Muirhead said, "that if we're going to answer the hardest questions about Mars — like, for example, whether life showed up on Mars — we're going to need to bring material from Mars to our terrestrial laboratories."

Arranging a mission to bring the samples back is a challenge, one that NASA intends to tackle in a partnership with the European Space Agency. "This process is remarkably interrelated, everything is connected to everything else in some way," Muirhead said. There are a host of spacecraft components: NASA's Mars 2020 rover to select the samples, a "fetch rover" to pick up those samples, a rocket to launch them off the Red Planet, a capsule to bring them back to Earth.

Mars 2020 will depart next summer and head toward Jezero crater for a February 2021 landing. It will be conducting its own investigations and stashing away intriguing rocks for its successor to bring home.

That mission could launch in 2026, Muirhead said. The mission's early days would be fairly typical for any Red Planet mission. One of the first key challenges of the mission is for spacecraft engineers to land much more weight on Mars than previous missions have done. That will stretch out the anxiety-inducing landing process that haunts Mars spacecraft personnel, as the vehicle risks crashing into the surface.

"Once at Mars, we're going to do entry, descent and landing, our famous seven minutes of terror," Muirhead said. "We're going to make that probably about eight or nine minutes of terror." But he said the team has found a way to deliver significantly more bulk to the surface safely than the techniques that NASA will use to land the Mars 2020 mission.

Once that spacecraft lands, it will deploy the fetch rover, which will drive out to collect the sample containers Mars 2020 has so carefully prepared. The fetch rover will be smaller than that machine and Curiosity — more like the size of Spirit and Opportunity, Muirhead said.

The fetch rover is inspired by the Rosalind Franklin rover that the European Space Agency is sending to Mars on a similar timeline to Mars 2020, but it will end up looking very different from its older sibling. "ExoMars is a serious science rover; this is a speedster," Muirhead said. "That's a fast-moving, highly autonomous rover," he said of its planned travel stats.

Next on the task list is to pack up the samples for the long journey to Earth. Scientists are designing a return capsule that can safely carry as many as 30 rock samples and two air samples. "All of that fits into Darth Vader's helmet," Muirhead said, referring to the shape of the container, which will then itself be packed into a capsule for the long voyage. At around this point of the mission, the sample container will be sealed and sterilized to make sure no loose Martian material sneaks free on Earth.

While plenty of spacecraft have journeyed out to the Red Planet, none have ever retraced their steps. "To fly to Mars, that one-way trip is fairly traditional," Muirhead said. "It's the return trip that's particularly challenging." The vehicle will rely on electric propulsion to make its way to Earth, where it will eject the sample assembly in 2031.

The team doesn't want to use parachutes, which Muirhead called "notoriously tricky"; instead, the capsule will navigate its own way through Earth's atmosphere. That means the vehicle will need to carefully slow down enough not to splatter on the surface, but not slow down so much that atmospheric friction burns it.

At the end of his presentation, Muirhead tackled several questions from the audience quibbling with specific aspects of the mission design under discussion. One audience member expressed dismay that the return capability would not test the sorts of vehicles that could bring humans home. Another thought the mission could be cheaper if it ignored the risk of letting Martian material loose in Earth's biosphere.

In both cases, Muirhead emphasized that a Mars sample-return mission would be about the scientific secrets held in those samples. "This mission is about bringing samples back," he said with regards to planetary protection. "From an architecture point of view and from ensuring the integrity of the science samples, I'm not sure there's a much simpler solution than the one we're considering."