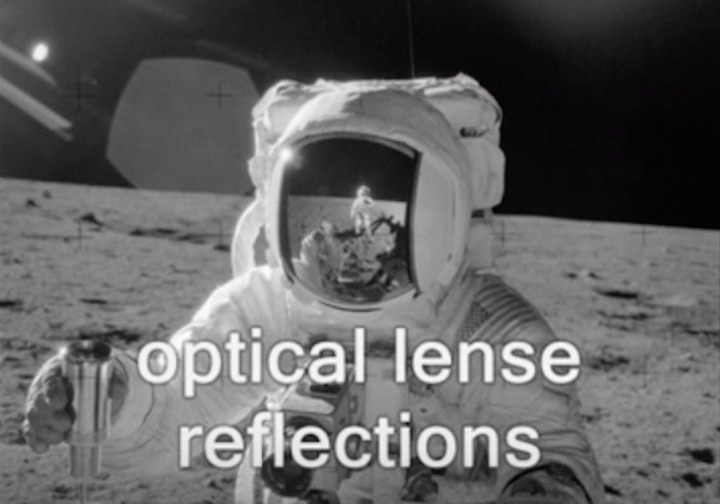 You've heard the “moon hoax” claims. You know they're wrong. But can you explain why? 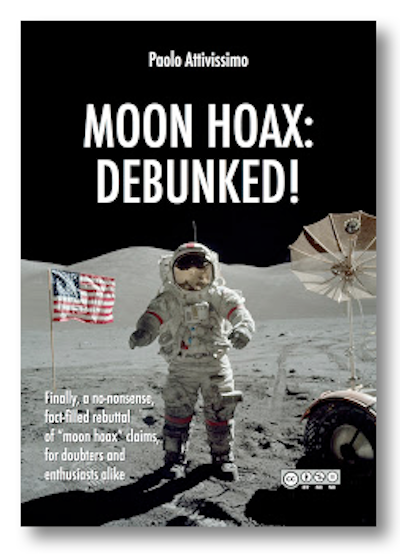 I’ve written this book not only for open-minded doubters, to dispel their understandable questions about what is even today an incredible series of voyages, but also for space enthusiasts, who will find concise, plain-language but technically accurate answers that they can offer to their doubtful friends and use to quash the quibbles of conspiracy theorists. This information may come in handy especially for anyone giving talks about space.

Moon Hoax: Debunked! is based on my Italian-language book on the same subject, which is also fully available online and likewise donation-supported.

You can read the full, updated Moon Hoax: Debunked! online for free, but bear in mind that every donation is an encouragement for me to write more books like this and to keep this one up to date. Past donations have allowed me to produce the freely downloadable documentary Moonscape, which presents the Apollo 11 landing and EVA using restored and resynchronized original audio, photos, TV and film. So please try this book, and if you like what you read, feel free to click the button below to make a donation of your choice.

What’s in the book

The first part of Moon Hoax: Debunked! begins with Race for the Moon, a quick primer on the historical background of the Moon race, followed by How We Went to the Moon, a description of the hardware and the events of a typical Apollo Moon mission. Then there's a chapter that provides a detailed explanation of the best evidence of the Moon landings and a chapter covering the origins and popularity of the various hoax theories.

The rest of the book is dedicated to a point-by-point debunking of the main “moon hoax” claims and common misconceptions regarding the Moon landings, divided by category: alleged anomalies in photographs and in video and film footage, technological and physical anomalies, and other miscellaneous claims.

There’s also a chapter on how to argue with a Moon hoax believer and one covering the various UFO claims related to the Moon landings.

Finally, you will find a chapter that shows how the Apollo missions don't need conspiracy theories to be a fascinating story. For example, did you know how close to failure each flight actually came? Did you know that pictures of Playmates were smuggled to the Moon to prank the astronauts? Or that there was a secret Soviet plan to land a Russian on the Moon before the US?

The book is also an opportunity to explore the technology of the space race: not only the rocketry but also the analog photography, film and television technology used to provide the visual record of the Moon missions.

What about the previous EPUB/Kindle/printed edition?

The 2013 edition of Moon Hoax: Debunked! is still available on Amazon Kindle and as paperback here, but I will no longer be updating it. The only edition I will be publishing from now on is the online one (the one you’re looking at now) because I don’t have enough time to write and also manage multiple editions and keep them synchronized, so I have to make a choice. Sorry!

I’m Paolo Attivissimo, a British-Italian science journalist specialized in research into conspiracy theories, hoaxes and urban legends. I’ve written or coauthored over a dozen books on computers, the Internet and other subjects such as 9/11 conspiracy theories, UFOs and science-related mysteries in Italian.

I live near Lugano, Switzerland, where I work for Swiss National Radio (RSI) and as a consultant for RAI, Mediaset and other Italian-language radio and TV networks. My CV (in Italian) is here.

I’m also a lifelong space enthusiast and a part-time collaborator of NASA's Apollo Lunar Surface Journal, so Moon Hoax: Debunked! is a labor of love as well as a good excuse to delve into the fascinating human and technical details of mankind's greatest journeys of exploration. I hope you’ll enjoy reading it as much as I’ve enjoyed writing it.