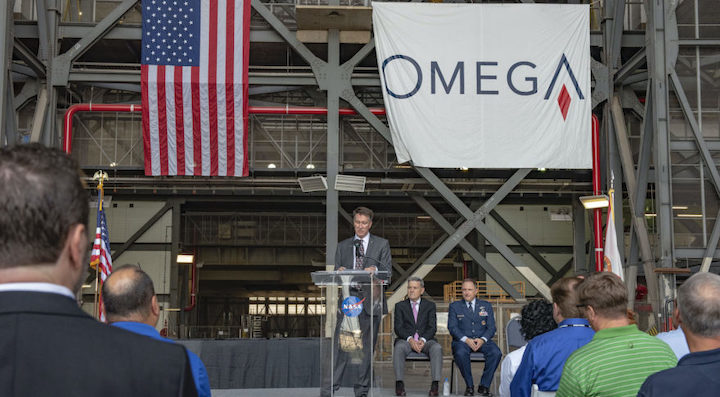 Space Launch Complex 6, or SLC-6, is a sprawling launch facility that was built in the 1980s for NASA’s Space Shuttle.

WASHINGTON — Northrop Grumman’s new rocket OmegA will launch from Vandenberg Air Force Base, California, a senior executive said Oct. 23. The company will use the same pad that the Air Force currently leases to United Launch Alliance for Delta 4 Heavy launches.

“On the West Coast we will launch from SLC-6,” Kent Rominger, Northrop Grumman’s vice president and capture lead for the OmegA launch system, said in a presentation at the 2019 International Astronautical Congress.

Space Launch Complex 6, or SLC-6, is a sprawling launch facility that was built in the 1980s for NASA’s Space Shuttle, along with a 3-mile runway for the shuttle to land. After NASA terminated the program, the complex was turned over to the Air Force and its launch contractors Lockheed Martin and Boeing, which are ULA’s parent companies. ULA is leasing SLC-6 for Delta 4 Heavy launches.

The Delta 4 is expected to fly until 2024. Rominger said it will be possible for Northrop Grumman to start building the OmegA pad without disrupting ULA’s operations.

“Our plan is to use it on a non-interference basis as we modify the pad to accommodate OmegA,” said Rominger. The rocket’s first and second stages use solid fuel “so we don’t have nearly the demand for the cryogenics that you would on a liquid system,” he said. The upper stage uses a liquid engine but Rominger said that will only require a small amount of cryogenic propellants.

“Modifications at SLC-6 are not as difficult as one might imagine,” Rominger said.

OmegA is one of the rockets being offered to the Air Force for the National Security Space Launch Phase 2 Launch Service Procurement. One of the requirements for all bidders is to be able to launch from both East Coast and West Coast ranges.

Northrop Grumman is building its East Coast pad and vertical assembly facility at NASA’s Kennedy Space Center in Florida, at the same site where NASA will launch its Space Launch System rocket. Rominger said both vehicles will be able to operate on the same site without causing disruption. “We roll out, launch and come back,” he said. “There is no huge conflict to share it with SLS.”

Where Northrop Grumman would launch on the West Coast had been a source of speculation for months. Of the four launch providers competing for the Air Force procurement contract, only ULA and SpaceX have pads at Vandenberg. Blue Origin has said it is considering options and has not yet announced its plans to launch from the West Coast.

The Air Force Space and Missile Systems Center over the past several months allowed both Blue Origin and Northrop Grumman to tour SLC-6. It takes years to secure permits to build new launch pads at Vandenberg so using existing ones might the only option for new entrants. Industry sources told SpaceNews that ULA raised concerns about sharing the site and wanted to make sure that sensitive equipment used to assemble and launch classified satellites was not shown to competitors.

ULA CEO Tory Bruno said any decisions on who uses the pad are made jointly by the company and the Air Force. During a meeting with reporters Oct. 23, Bruno did not mention that Northrop Grumman would be allowed to use SLC-6 but said ULA, at the government’s request, has allowed other companies to inspect the facilities. ULA’s lease will continue for as long as the Delta 4 Heavy is in operation, which will be at least until 2024.

Rominger said Northrop Grumman believes OmegA has a strong chance to win one of two Phase 2 contracts the Air Force plans to award next year. He said OmegA’s strengths are its simple design and reliability.

The rocket’s intermediate version is expected to fly in 2021 and the heavy variant in 2024. He said over the past 20 years, solid rocket motors used in space vehicles have been “99 percent reliable,” but he acknowledged that no matter how good a rocket might look on paper it has to show it can perform in flight. OmegA’s booster and second stage are solid fueled and the third stage uses two RL-10 liquid engines made by Aerojet Rocketdyne.

Rominger said Northrop Grumman already is producing flight hardware and is racing to complete development tests. “Early 2021 is not that far away,” he said.

So far Northrop Grumman has only test fired the first stage of OmegA. In a May 30 static fire test in Utah, the booster was fired for 120 seconds and near the end the engine nozzle suffered an anomaly. In a statement in June, the company said it studied the data and concluded the nozzle anomaly did not affect motor performance and the issue appeared to be limited to the rear most section of the nozzle. Northrop Grumman said it would need to analyze the data further to determine whether manufacturing, design or conditions unique to ground tests contributed to the exit cone issue.

The ground test of the second state was expected to happen in August 2019 but Rominger said it has been pushed into early 2020, and did not provide a more specific timeline.

A spokeswoman said a in a statement to SpaceNews that Northrop Grumman “postponed the OmegA second stage static fire test to early next year to provide time to incorporate lessons learned from the first stage test.”