This case has been described in many documents by Dr. Richard Haines. The following is the description in Peter Sturrock’s book, The UFO Enigma:

The DC-10 airplane was under the control of autopilot system #2 and was flying at 37,000 feet altitude. The entire sky was dark and clear ahead and above the airplane, except for a partial under cast with small clouds extending to about 20 miles ahead. The aircraft was flying at an indicated air speed of 275 knots (true air speed 530 knots). The aircraft was about half way between Buffalo and Albany, and had just changed from contact with the “FROM” VOR (Very-High-Frequency Omnidirectional Bearing) signal emanating from Buffalo to the “TO” signal from Albany. The aircraft was just south of Syracuse, New York.

Suddenly and unexpectedly, the airplane began to turn to the left, making a 15 degree bank. Within a few seconds, the First Officer and the Captain looked to the left side of their plane and saw an extremely bright white light at about their own altitude. Subsequently, the Flight Engineer also looked and saw the light source. It appeared to be perfectly round and its apparent diameter was about 3 degrees of arc. However, the Captain estimated the object to be about 1,000 yards away and to be about 100 feet in size, that corresponds to an angular size of 2 degrees. “Its intensity was remarkable — about the intensity of a flashbulb,” he remarked. Boston ATC radioed to ask “United 94, where are you going?” The Captain replied “Well, let me figure this out. I will let you know.” He then noticed that the three cockpit compasses (that use sensors in different parts of the plane) were all giving different readings. At this point, the Copilot turned off the autopilot and took manual control of the airplane.

Based upon the fact that the object did not move laterally in the cockpit window during the 45 degree left heading change and from knowledge of the turn radius of this airplane at its stated velocity, Haines calculated the approximate distance to the object to be about 10 nautical miles. If the pilot’s angular size estimate for the object is accurate, this suggests that the light source was about 2100 feet across. The object appeared to stay with the airplane for 4 to 5 minutes, after which it departed very rapidly, disappearing within about 15 seconds behind them to the west. The Captain asked ATC if they had any radar traffic in that area and received a negative reply.2

For some reason, Haines does not present any data in the form of an incident report or maintenance records regarding the aircraft. He indicates that the UFO must have affected the port side gyrocompass more than the starboard causing the aircraft to bank to the port in a northerly direction. What is confusing with this theory is that the UFO only became visible when the aircraft began its bank to the northeast because it was in the west/northwest. So, how could the UFO affect one side of the plane if it was behind an eastern bound aircraft? Perhaps this is why the panel of scientists reviewing the case stated:

In responding to this presentation, the panel took the position that evidence of interference with aircraft equipment is interesting but, in the absence of corroborative data from flight recorders and other mechanical or electrical recording equipment, the evidence presented must be regarded as anecdotal. It is quite possible that the persons making the report summarized above did indeed see unusual and striking phenomena. It does appear that the airplane departed from its normal flight path, but this could have happened for a variety of reasons. As with reports related to other categories of physical evidence, the evidence summarized in this section should be regarded as suggestive but far from sufficient to establish any actual physical linkage between the reported luminous phenomenon and the air- plane’s flight deviation. In order to improve our understanding of these phenomena, it will be necessary to establish more definite facts from the case work. To this end, there should be strong efforts to quantify the observations and to obtain multiple measurements of the same event, and investigators should bring a critical attitude to the compilation and analysis of the data.3

So what are some alternative explanations for what happened that night. One is “pilot error”. The possibility exists simply that the crew goofed and caused the course deviation. I am no expert in the operation of the autopilot but it seems possible that the switch- ing of VOR stations might have affected the navigation system and autopilot. After all, the plane changed course shortly after they had changed the VOR station. I am sure there are other potential problems that could produce the course deviation as well. Some- thing as simple as a poor solder joint on a circuit board might cause an intermittent connection and cause instrumentation to fail. In this scenario, the problem could disappear as quickly as it came. Did this particular plane ever demonstrate the problem before or after this case? Without any additional information, it is hard to determine what really transpired. It seems more plausible that a pilot mistake or equipment malfunction caused the course deviation than an alien spaceship playing with the gyro compasses!

What about the visual UFO? That is pretty easy and I am amazed that Haines never bothered to go into any possibilities other than this was some sort of unknown craft. A planetarium program with the correct location and time set to 2105 EST will show that the UFO was in the same general location as the bright planet Venus in the west. According to Stellarium, Venus set at 2106 EST in Syr- acuse. However, this is 129 meters above sea level and not at the altitude of the aircraft. 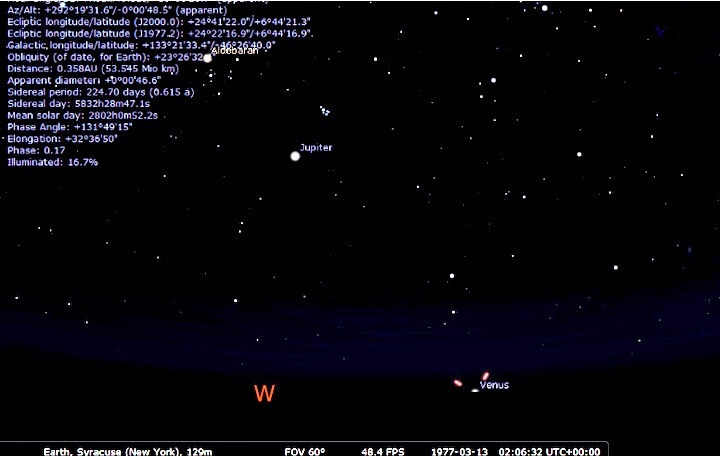 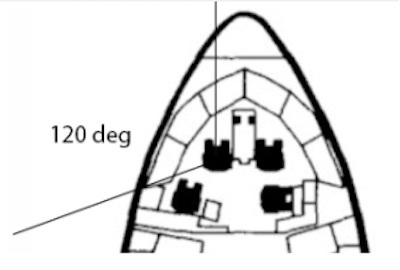 According to Haines, the plane altered from an easterly course to approximately a 45 degree bearing. At this point, the pilot and co-pilot saw the UFO outside their port window. The pilot can look outside his rearmost window towards a bearing of about 110-120 degrees relative to his heading. By leaning forward or looking closer to the window, he should be able to see even further backwards. With a heading of 45 degrees true azimuth, the pilot would be able to look to- wards approximately 285-295 degrees true azimuth. Venus was located at 292 degrees when it was setting.

Based on all of this information, it appears that the visual sighting of this UFO was the planet Venus setting in the West Northwest. For some reason, Haines never mentioned the word “Venus” in any of the documents I examined. Wouldn’t a scientist investigating a UFO case look at one of the greatest sources of UFOs first? Maybe a more “critical attitude” towards examining this case could have resolved this. Instead the “Neil Daniels” case has now entered UFO folklore. While many UFO proponents will proclaim this case an example of UFO interfering with the operations of an aircraft, it appears there is a better explanation. The probability of pilot/equip- ment error coupled with a sighting of Venus seems more likely than a UFO trying to manipulate the flight of a passenger airliner for no good reason.

This case should be removed from the Weinstein list since it has a potential explanation. Notes and references