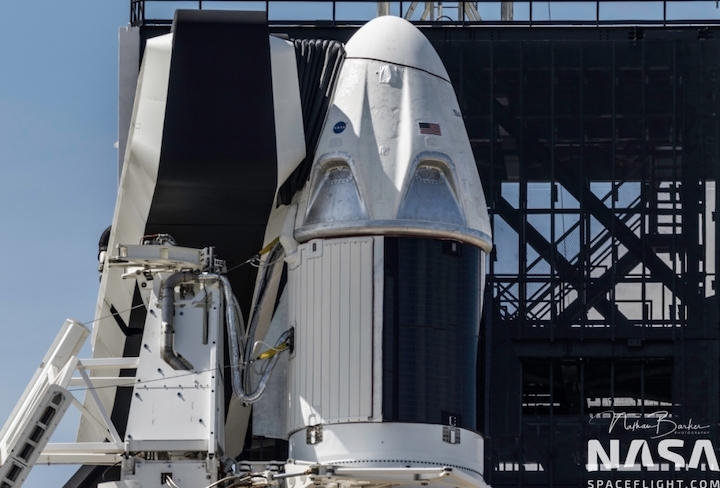 SpaceX continues to make progress towards launching crews into orbit, but several critical tests remain before those plans can come to fruition. The company is developing the Crew Dragon spacecraft to transport crews to and from the International Space Station as part of NASA’s Commercial Crew Program.

The United States has not launched humans into orbit since the Space Shuttle program ended in 2011. Since then, NASA has been relying on the Russian Soyuz rocket and spacecraft to launch American crew members to the International Space Station. This has come at a steep cost – with Russia charging NASA as much as $85 million per seat.

“We would rather have it be a true partnership where we launch on their rockets, and they launch on our rockets,” said NASA Administrator Jim Bridenstine, at an event on Oct. 10 at SpaceX’s headquarters.

The Commercial Crew Program has been plagued with delays. When the winning providers were chosen in 2013, the first crewed flights were scheduled for 2017.

However, a lack of funding from Congress in the early years of the program, combined with technical setbacks in recent months, has caused the first crewed flights to slip into 2020.

Despite the delays, 2019 has seen substantial progress from SpaceX. The company successfully completed the Demo-1 mission in March. That mission saw a Crew Dragon capsule fly into orbit atop a Falcon 9 rocket for the first time, dock with the International Space Station, and then return home with a splashdown in the Atlantic Ocean.

But amongst the success have also been setbacks. SpaceX has been working two primary technical challenges over the past year. These include a major test stand anomaly and continued problems with the spacecraft’s parachutes.

On April 20th, the same Crew Dragon which performed the Demo-1 mission was to execute a static fire test to verify that its systems were functioning properly ahead of an inflight abort test.

The inflight abort test is where an uncrewed Crew Dragon capsule attempts to escape from a Falcon 9 at the moment of maximum aerodynamic pressure on the launch vehicle.

The April static fire test was a precursor to the inflight abort – allowing the capsule to perform the abort maneuvers while being held down to a test stand. 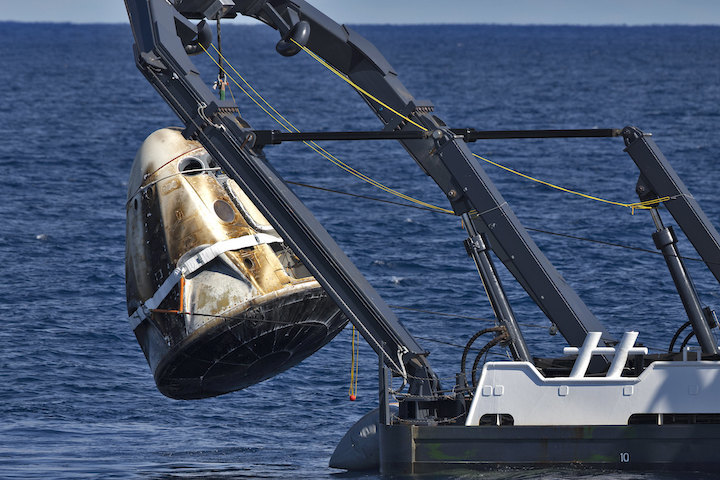 The static fire went horribly wrong – with Crew Dragon exploding on the test stand. Consequently, the subsequent inflight abort test has yet to occur.

The static fire anomaly occurred during pressurization of the abort system – a process that occurs just milliseconds before the Crew Dragon’s SuperDraco engines ignite.

After months of investigation, the anomaly was traced to a valve leaking propellant into high pressure helium lines. The valve has since been replaced by burst disks to resolve the problem.

That investigation is now wrapping up, meaning that SpaceX is nearly ready to move forward with the inflight abort test.

But first, the company must redo the static fire test. A successful static fire of the abort sequence will help to verify that the redesigned system is safe for crewed spaceflight.

It is understood that the test could occur as soon as early November.

Like last time, the static fire of Crew Dragon will be conducted at a test facility located at SpaceX’s Landing Zone 1 in Cape Canaveral, Florida.

If all goes well, that same capsule will then be used to conduct the inflight abort test. The abort test still has a chance of occurring by the end of the year – assuming that the static fire takes place in the relatively near future.

The Crew Dragon – designated C205 – for the two upcoming tests is already at the Cape for final processing.

The C205 spacecraft was originally assigned to the Demo-2 mission instead. That mission will be Crew Dragon’s first crewed flight to the Space Station.

However, after the April anomaly, C205 was reassigned to perform the abort testing. This was because the original capsule for the abort test – C201 – was destroyed in the April static fire incident.

That vehicle is undergoing final preparations in SpaceX’s Hawthorne California factory. If all goes to plan, it will be shipped to Florida for final processing by the end of the year.

However, at the Oct. 10 event, Bridenstine and SpaceX CEO Elon Musk acknowledged that there is still a lot of work ahead before a crewed flight can happen – even if the hardware is ready by the year’s end.

The parachutes are likely the critical path to the crewed flight.

Incidents during SpaceX’s parachute testing over the past year have raised safety concerns inside of NASA.

Musk explained that although the current parachute design iteration – designated Mk2 – was “probably safe,” SpaceX has made the decision to switch to the improved Mk3 design.

The Mk3 upgrade features stronger lines – made of zylon as opposed to nylon – and an improved stitching pattern, according to Musk.

In order to validate their safety, the Mk3 parachutes must prove themselves during a robust test campaign, he said.

SpaceX plans to conduct as many as ten drop tests before the end of the year. This is expected to be the minimum number required to qualify the system for crewed spaceflight.

“We can use the data from Mk2 to help qualify the Mk3, as long as we see consistent repeatable performance that matches that of Mk2,” said Bridenstine. “If it is consistent, it will give us confidence that we will not have to do as many drop tests. If it is not consistent, then we will have to do more.”

Therefore, Bridenstine cautioned that while the hardware may be ready by the end of 2019, the qualification campaign will likely last longer. At this point in time, the best-case scenario would see a crewed Demo-2 test flight in the first quarter of 2020, according to Musk and Bridenstine.

Demo-2 is the final milestone required to certify Crew Dragon for regular crew rotation missions to and from the Space Station.

The Demo-2 flight will carry NASA astronauts Bob Behnken and Doug Hurley to the International Space Station. Current plans call for them to stay at the Space Station for about two weeks.

Due to the delays with the Crew Dragon program, NASA is considering increasing the duration of the mission. This would allow it to act as a standard crew rotation mission – relieving some of the schedule pressure.

The possibility of a longer duration Demo-2 mission only came about recently. The capsule originally slated for the mission was not suitable for a longer duration flight, according to ISS Program Manager Kirk Shireman, at a recent press conference.

However, the change of capsules from C205 to C206 for Demo-2 opened up the possibility for a longer stay at the Space Station.

Whatever the case, NASA is expected to purchase one more seat on a Soyuz to help relieve the schedule pressure.