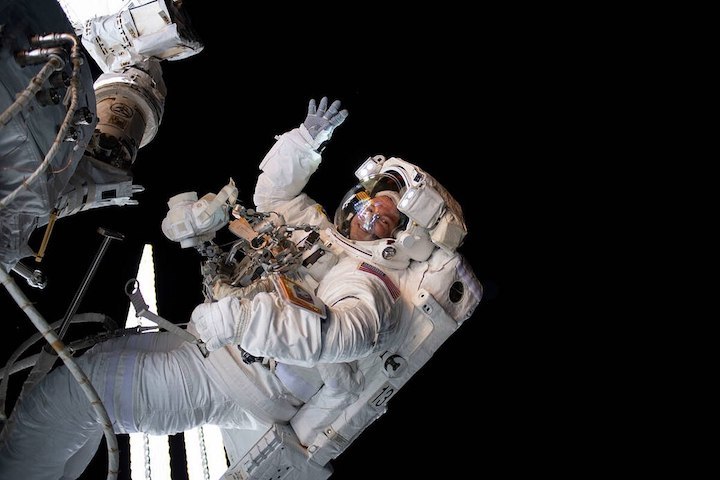 Yet Morgan, who was hurtling through space at 17,150 miles per hour Wednesday and completed a harrowing 7-hour space walk earlier this month, choked up at the beginning of a live link with students from the Uniformed Services University of the Health Sciences, in Bethesda, Maryland, where he is an alumnus.

“It’s such an honor to be with you. I have tears in my eyes,” Morgan said, holding up a pennant bearing the USUHS logo. “The Uniformed Services University is a center of excellence for military medicine, and I’m so proud to be a part of your team.”

Morgan has been in space since July 20, when he, Russian cosmonaut Alexander Skvortsov and Italian astronaut Luca Parmitano blasted off from Kazakhstan in a Soyuz MS spacecraft. Like all astronauts on the ISS, Morgan is a jack-of-all-trades, conducting spacewalks, working on robotics, repairing the station’s systems and managing research.

But on Wednesday, he took time out to discuss what it’s like to be in space with soon-to-be military physicians.

Commissioned in 1998, Morgan’s spent several tours overseas, deploying with special operations forces to Afghanistan, Iraq and several African countries. On those deployments, he used his skills as an emergency medical doctor to set bones, stitch wounds and save lives. In space, however, he uses his hands to install refrigerator-sized batteries on the outside of the space station, run experiments and occasionally deals with bumps, bruises and other minor ailments that affect astronauts.

“An additional duty is crew medical officer, so when there is a physician on board, obviously I’m a natural choice for that," he said.

When he’s not conducting long space walks, Morgan largely is doing research, with more than 300 experiments on the ISS, including biological and human studies that have a goal of facilitating medical breakthroughs and understanding the effects of long-duration space travel.

This past summer, the ISS acquired a biological 3D printer — a “BioFabrication Facility,” or BFF — to print human tissue from adult human cells and tissue-derived proteins, with an aim to eventual fabricate complex tissues, like organs, in space where gravity isn’t a factor in supporting tissue shapes.

Morgan said it would be doctors “in this room” who will help guide the medical research and health care needed to care for those future space travelers.

“The room you are sitting in is filled with people who are going to help us tackle some of these problems — of how we deal with surgical emergencies far away. Is this something we’ll do robotically with remote guidance or is this something that we’ll have a crew member trained ... so they could comfortably perform a surgical operation? I don’t know that we know how we are going to deal with that yet,” he said.

Since arriving at the ISS, Morgan has conducted three spacewalks, including one on Oct. 6 with fellow NASA astronaut Christina Koch, during which he lost some material on the palm of his glove — a potential threat to his protective space suit’s integrity. His tether became snarled on the ISS as he returned after a long day to the airlock, and the pair installed a battery that later was found to be broken.

Morgan said he relies heavily on his special operations training, first during his NASA training, and now, when potentially life-threatening problems occur.

“Out-of-the-box thinking is one of the hallmarks of special operations — always being the thought leader, on the cutting edge of how to solve problems under ambiguous circumstances with limited resources,” Morgan said. “[In Special Forces training], humans are more important than hardware. The emphasis is put on our people and developing them. It’s something NASA does well and it was part of my operational skill set.”

Radloff asked what lessons Morgan learned on crisis management on board the ISS, but Morgan was so excited to hear from him that he forgot the question.

“You are some of the finest examples of medical professionals I have ever encountered," he said to his former medics. “The greatest honor of my life was serving alongside you guys and many medics just like you. It warms my heart to see you so successful there.”

Morissette later said Morgan’s heartfelt reply to Radloff was just one example of his humility.

“He’s always been supportive of me, of what I was trying to achieve, regardless of what he had going on. When I was applying for this program, he was in the midst of his train-up for his launch, and he made time [to help me],” Morissette said.

With his wife, Stacey, and four children at home, Morgan has, and will, miss many events while in space: anniversaries, sports games, school achievements, holidays. On Wednesday, Navy Ensign Ted Johnson reminded him he also will miss the Army-Navy football game on Dec. 14.

Morgan and Parmitano are scheduled to make five spacewalks in November to repair the ISS’s Alpha Magnetic Spectrometer, or AMS, cosmic-ray detector. All space walks can be watched live on NASA TV.