Newly created strontium, an element used in fireworks, detected in space for the first time following observations with ESO telescope 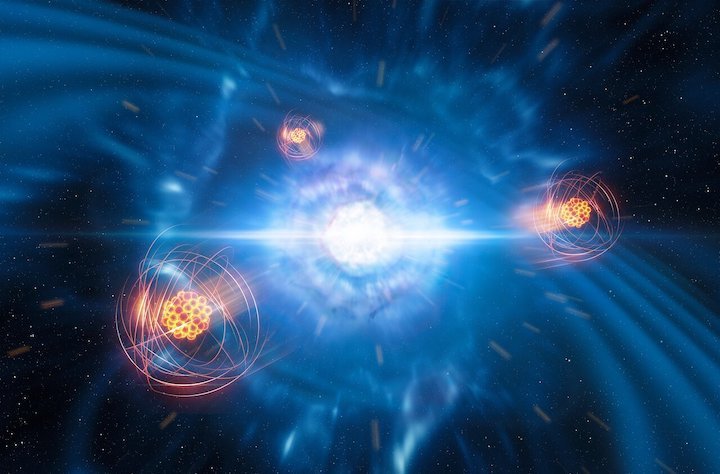 For the first time, a freshly made heavy element, strontium, has been detected in space, in the aftermath of a merger of two neutron stars. This finding was observed by ESO’s X-shooter spectrograph on the Very Large Telescope (VLT) and is published today in Nature. The detection confirms that the heavier elements in the Universe can form in neutron star mergers, providing a missing piece of the puzzle of chemical element formation.

In 2017, following the detection of gravitational waves passing the Earth, ESO pointed its telescopes in Chile, including the VLT, to the source: a neutron star merger named GW170817. Astronomers suspected that, if heavier elements did form in neutron star collisions, signatures of those elements could be detected in kilonovae, the explosive aftermaths of these mergers. This is what a team of European researchers has now done, using data from the X-shooter instrument on ESO’s VLT.

Following the GW170817 merger, ESO’s fleet of telescopes began monitoring the emerging kilonova explosion over a widerange of wavelengths. X-shooter in particular took a series of spectra from the ultraviolet to the near infrared. Initial analysis of these spectra suggested the presence of heavy elements in the kilonova, but astronomers could not pinpoint individual elements until now.

“By reanalysing the 2017 data from the merger, we have now identified the signature of one heavy element in this fireball, strontium, proving that the collision of neutron stars creates this element in the Universe,” says the study’s lead author Darach Watson from the University of Copenhagen in Denmark. On Earth, strontium is found naturally in the soil and is concentrated in certain minerals. Its salts are used to give fireworks a brilliant red colour.

Astronomers have known the physical processes that create the elements since the 1950s. Over the following decades they have uncovered the cosmic sites of each of these major nuclear forges, except one. “This is the final stage of a decades-long chase to pin down the origin of the elements,” says Watson. “We know now that the processes that created the elements happened mostly in ordinary stars, in supernova explosions, or in the outer layers of old stars. But, until now, we did not know the location of the final, undiscovered process, known as rapid neutron capture, that created the heavier elements in the periodic table.”

Rapid neutron capture is a process in which an atomic nucleus captures neutrons quickly enough to allow very heavy elements to be created. Although many elements are produced in the cores of stars, creating elements heavier than iron, such as strontium, requires even hotter environments with lots of free neutrons. Rapid neutron capture only occurs naturally in extreme environments where atoms are bombarded by vast numbers of neutrons.

“This is the first time that we can directly associate newly created material formed via neutron capture with a neutron star merger, confirming that neutron stars are made of neutrons and tying the long-debated rapid neutron capture process to such mergers,” says Camilla Juul Hansen from the Max Planck Institute for Astronomy in Heidelberg, who played a major role in the study.

Scientists are only now starting to better understand neutron star mergers and kilonovae. Because of the limited understanding of these new phenomena and other complexities in the spectra that the VLT’s X-shooter took of the explosion, astronomers had not been able to identify individual elements until now.

“We actually came up with the idea that we might be seeing strontium quite quickly after the event. However, showing that this was demonstrably the case turned out to be very difficult. This difficulty was due to our highly incomplete knowledge of the spectral appearance of the heavier elements in the periodic table,” says University of Copenhagen researcher Jonatan Selsing, who was a key author on the paper.

With the combined efforts of LIGO, Virgo and the VLT, we have the clearest understanding yet of the inner workings of neutron stars and their explosive mergers.