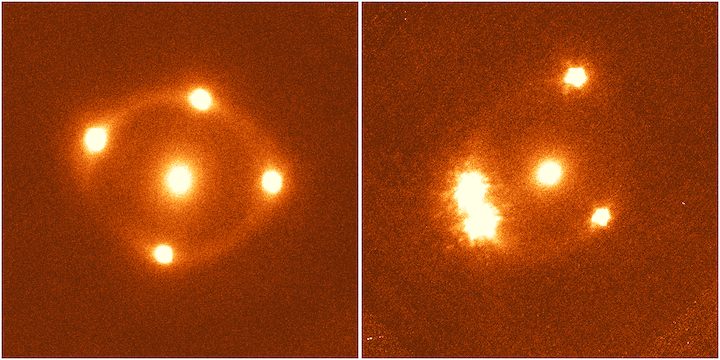 Images made with the W.M. Keck Observatory in Hawaii show how light from two distant galaxies is distorted into multiple images. UC Davis astronomers have made a new estimate of the Hubble Constant, which describes the expansion of the universe, by observing these distorted images. (Chris Fassnacht/UC Davis)

New measurements of the rate of expansion of the universe, led by astronomers at the University of California, Davis, add to a growing mystery: Estimates of a fundamental constant made with different methods keep giving different results.

“There’s a lot of excitement, a lot of mystification and from my point of view it’s a lot of fun,” said Chris Fassnacht, professor of physics at UC Davis and a member of the international SHARP/H0LICOW collaboration, which made the measurement using the W.M. Keck telescopes in Hawaii.

A paper about the work is published by the Monthly Notices of the Royal Astronomical Society.

The Hubble constant describes the expansion of the universe, expressed in kilometers per second per megaparsec. It allows astronomers to figure out the size and age of the universe and the distances between objects.

Graduate student Geoff Chen, Fassnacht and colleagues looked at light from extremely distant galaxies that is distorted and split into multiple images by the lensing effect of galaxies (and their associated dark matter) between the source and Earth. By measuring the time delay for light to make its way by different routes through the foreground lens, the team could estimate the Hubble constant.

Using adaptive optics technology on the W.M. Keck telescopes in Hawaii, they arrived at an estimate of 76.8 kilometers per second per megaparsec. As a parsec is a bit over 30 trillion kilometers and a megaparsec is a million parsecs, that is an excruciatingly precise measurement. In 2017, the H0LICOW team published an estimate of 71.9, using the same method and data from the Hubble Space Telescope.

The new SHARP/H0LICOW estimates are comparable to that by a team led by Adam Reiss of Johns Hopkins University, 74.03, using measurements of a set of variable stars called the Cepheids. But it’s quite a lot different from estimates of the Hubble constant from an entirely different technique based on the cosmic microwave background. That method, based on the afterglow of the Big Bang, gives a Hubble constant of 67.4, assuming the standard cosmological model of the universe is correct.

An estimate by Wendy Freedman and colleagues at the University of Chicago comes close to bridging the gap, with a Hubble constant of 69.8 based on the luminosity of distant red giant stars and supernovae.

A difference of 5 or 6 kilometers per second over a distance of over 30 million trillion kilometers might not seem like a lot, but it’s posing a challenge to astronomers. It might provide a hint to a possible new physics beyond the current understanding of our universe.

On the other hand, the discrepancy could be due to some unknown bias in the methods. Some scientists had expected that the differences would disappear as estimates got better, but the difference between the Hubble constant measured from distant objects and that derived from the cosmic microwave background seems to be getting more and more robust.

“More and more scientists believe there’s a real tension here,” Chen said. “If we try to come up with a theory, it has to explain everything at once.”

The work was funded by the National Science Foundation.