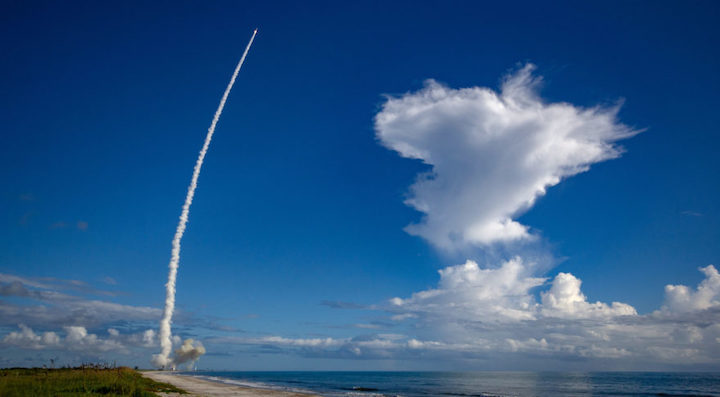 Bruno said ULA is confident that Vulcan will be ready to fly Category C payloads by 2023.

WASHINGTON — United Launch Alliance CEO Tory Bruno said the development of the company’s new Vulcan Centaur rocket is progressing as planned and the vehicle has been offered to the U.S. Air Force in ULA’s proposal for the National Security Space Launch Phase 2 Launch Service Procurement.

The Air Force allowed bidders to pitch a main vehicle and also a backup rocket. During a meeting with reporters Oct. 23, Bruno said ULA is offering Vulcan as the primary vehicle and Atlas 5 as a secondary rocket for the so-called Category A/B missions, which are the majority of national security satellite launches. For the Category C missions that require a capability to launch very large satellites for the intelligence community, ULA will only offer Vulcan, not the Delta 4 Heavy which is today the only vehicle capable of performing these demanding missions.

Bruno said ULA is confident that Vulcan will be ready to fly Category C payloads by 2023, approximately one year before the last scheduled flight of the Delta 4 Heavy. The Air Force on Sept. 30 awarded ULA afive-year $1.18 billion contract to complete the last planned five Delta 4 Heavy National Reconnaissance Office missions from 2020 through 2024.

Four competitors — ULA, SpaceX, Blue Origin and Northrop Grumman — submitted proposals in August. The Air Force will select two providers in 2020 to split 60/40 all national security missions from 2022 to 2026. To win these contracts, all have to demonstrate that they can meet the requirements for all national security missions projected for those five years. By the time the Delta 4 Heavy is taken out of service, the Air Force said both winners of Phase 2 will have to be able to compete for Category C missions.

“Delta 4 will not be part of Phase 2,” said Bruno. ULA expects Vulcan to be certified for Categories A/B missions in 2021 after the vehicle completes two successful flights. The first flight will be an Astrobotic mission to the moon and the second a Sierra Nevada Dream Chaser resupply flight to the International Space Station.

After the first two Vulcan flights are accomplished, ULA will upgrade the Vulcan Centaur upper stage to get the extra performance it will need for the heavy missions. “Then we’ll be able to replace Delta 4,” said Bruno.

In the final solicitation for the Phase 2 procurement, the Air Force included a provision that allowed bidders to offer a secondary vehicle. ULA’s competitors argued this language unfairly favored ULA because it gives the company a safety net in case Vulcan development runs behind.

Bruno confirmed that ULA is offering Atlas 5 as a secondary vehicle and noted that the Air Force does not give bidders extra credit in the evaluation for having a backup vehicle. The procurement is fixed price so ULA would have to charge the same for Vulcan or Atlas 5 services. “You have to lock in pricing for whatever they would buy from you,” said Bruno.

Like the Delta 4, the Atlas 5 is projected to fly until 2024, Bruno said. But by law the Air Force only is allowed to buy Atlas 5 launches through 2022. Congress passed legislation in 2015 that requires DoD to end its reliance on Russian rocket engines. The Atlas 5 main engine is the Russian RD-180.

ULA’s Delta 4 Heavy has had a monopoly on Category C missions because no other vehicle on the market could meet those demands. SpaceX’s Falcon Heavy was only certified recently and could not compete for most of the NRO missions the Air Force awarded to Delta 4.

SpaceX President and COO Gwynne Shotwell said Oct. 22 that the company will be ready to compete for Category C missions if it wins one of the two slots in Phase 2.

The Falcon Heavy will be able to do these missions, she said. “We don’t need more performance, we don’t need heavier rockets, we don’t need more margin. The only thing that stands between us and our ability to fly those is an extended fairing, which is not hard,” Shotwell said. The company is looking to either buy a fairing from an outside vendor or develop its own. “We still have to see what the right approach is,” she said.