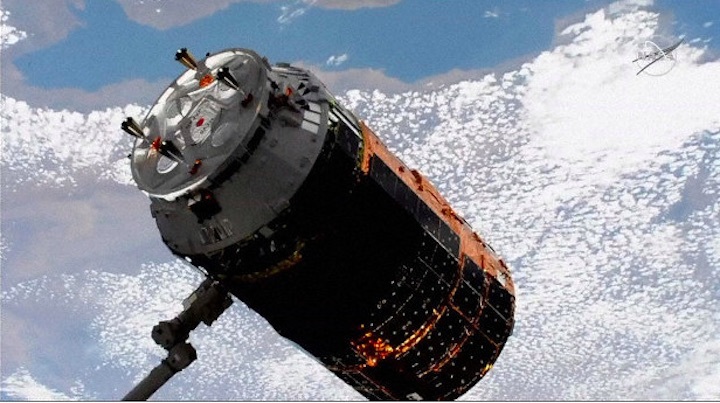 The Mainichi answers some common questions readers may have about Kounotori8, the Japanese unmanned cargo spaceship that docked at the International Space Station (ISS) on Sept. 28.

Question: A spaceship carrying supplies arrived recently at the ISS, didn't it?

Answer: Yes, the Japan Aerospace Exploration Agency's (JAXA) unmanned cargo transporter, Kounotori8 (HTV8) was launched aboard a rocket on Sept. 25, from the JAXA Tanegashima Space Center in Kagoshima Prefecture, southwest Japan. It arrived safely at the ISS on Sept. 28, and then completed docking. The launch this year marks a decade since the milestone first in the series was sent to space, and this is their eighth successful launch in a row.

Q: What is it carrying?

A: The ISS's main role is to serve as a home to astronauts living aboard the craft, so it's basically carrying food and drink supplies, clothes and other daily products required to support them. Apart from that, Kounotori8 also has tanks to replenish oxygen and nitrogen to refill levels at the station and batteries to power to the ISS, and it is carrying microsatellites to be released into space. In total, they weigh 5.3 tons. Even in zero gravity, carrying all that cargo is a big task.

Q: I heard they're doing a lot of experiments on the ISS too, right?

A: Japan has set up an experiment module on the ISS called "Kibo," to which Kounotori8 has brought up a variety of laboratory equipment for tests. It includes apparatus to investigate what effects zero gravity has on small creatures such as mice, and equipment to trial an optical communications system that could facilitate huge data transmissions across the planet in the future.

Q: Are the Kounotori crafts the only cargo spaceships in the world?

A: Russia and the U.S. also deploy similar spaceships, but each of them only has the ability to transport about 2 to 3 tons. Kounotori surpasses them by being able to carry 6 tons, and its strong points include its capacity to deliver batteries to power the ISS and other large items.

Q: How many spaceships do they intend to launch in this series?

A: For now the plan is to retire the series after Kounotori9 is launched next year. The HTV-X, which is currently under development, will replace Kounotori. Measures are being taken to try and ensure the HTV-X can be used with a new space station being developed in the U.S. that is intended to orbit the moon.