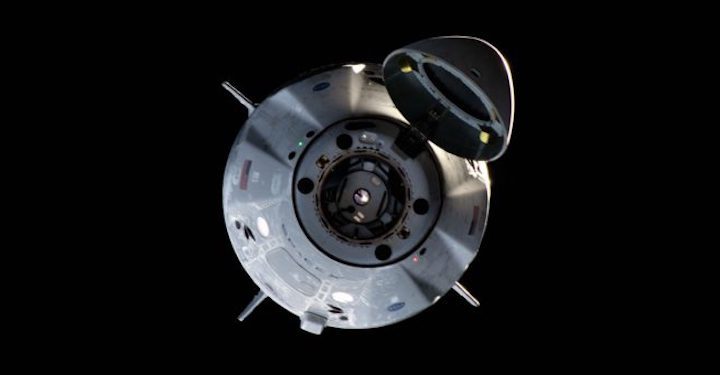 Seemingly equating SpaceX’s recent Crew Dragon delays with the distribution of Elon Musk’s public attention, the NASA administrator’s comment was almost universally criticized by the spaceflight community at large – and rightfully so. 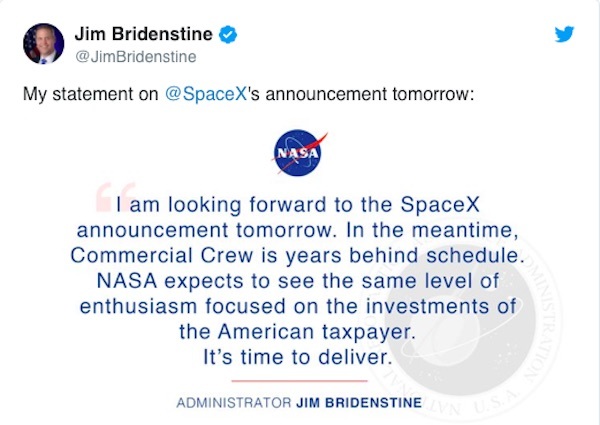 First, some context. Created in 2010 and first supported with serious funding some 12-24 months later, NASA’s Commercial Crew Program (CCP) exists to replace the astronaut transport capabilities once offered by Space Shuttle and now achieved with contracts for seats on Russian Soyuz launches. Primarily the result of inept bureaucracy in NASA and Congress, the Space Shuttle was “retired” in 2011 in full knowledge that the US would have to rely on Russia to get NASA astronauts to the ISS until 2015 (at the absolute earliest).

Congress shut down multiple 2010 proposals to continue Shuttle flights until the late 2010s, choosing instead to kill the Shuttle and divert its associated funding to the expendable Ares V rocket (now the Space Launch System, SLS) and Orion crew capsule. More on that later...

Retweeted by Bridenstine’s official Twitter account, above is the absolute best-case interpretation of the NASA administrator’s comment. Although Eric Berger means well, the interpretation gives NASA far too much credit. Specifically, Bridenstine (or whoever fed him the statement) went out of his way to make it entirely one-sided in its focus on SpaceX. By all appearances, it would have never been posted if not for Elon Musk’s plans to present on Starship. Bridenstine additionally notes that “Commercial Crew is years behind schedule” and indicates that “NASA expects to see the same level of enthusiasm focused on [its] investments”.

Altogether, it’s simply impossible to interpret it as anything less than Bridenstine scolding SpaceX – and SpaceX alone – for not falling to the floor, kissing NASA’s feet, and pretending that Crew Dragon and Falcon 9 are the only things in existence. Absent from Bridenstine’s criticism was NASA’s other (and even more delay-complicit) Commercial Crew Partner, Boeing, who has yet to complete a pad abort or orbital flight test of its Starliner spacecraft. SpaceX completed Crew Dragon’s pad abort in 2015 and completed a flawless orbital flight test in March 2019.

In essence, Bridenstine is publicly implying that SpaceX needs to stop being (or appearing to be) distracted by Starship and focus 100% on Crew Dragon. Boeing was not mentioned, despite being a minimum of six months behind SpaceX and dramatically more ‘distracted’ in the Bridenstine-style interpretation of the word. For reference, Boeing is a publicly-traded company with 150,000 employees, annual revenue of more than $100B, and a market cap of $206B. Boeing has 14 subsidiaries, a handful of which are involved in spaceflight, and has no less than one or two dozen products that are each more fiscally important to shareholders and board members than Starliner.

Compared to Boeing’s annual ~$100B revenue, the entirety of the Starliner development program – from the drawing board in 2010 to crewed, orbital spaceflight sometime in 2020 – is ~$4.8B. On the scale of corporate focus, Starliner has likely been a blip at most in 2019, with the company probably far more focused on the systematic organizational failures that lead to the deaths of hundreds of people in two near-identical 737 MAX crashes. Alas, NASA administrator Jim Bridenstine did not release a statement publicly implying that Boeing needs to devote the “same level of enthusiasm” to Starliner after the second fatal 737 MAX crash in March 2019. Nor did Bridenstine release a statement charging Boeing with a lack of focus after continuous reports of issues with the company’s KC-46 Pegasus tanker program, nor Boeing’s recent $9.2B US Air Force trainer jet contract, or myriad other corporate focuses.

On the other hand, as Musk noted in his relatively subtle September 28th responses to Bridenstine’s implicitly derisive comment, something like 50-80% of the entirety of SpaceX’s workforce and resources are focused on Crew Dragon, the Falcon 9 rockets that will launch it, or a combination of both. At present, Starship is – at most – a side project, even if its strategic importance to SpaceX is hard to exaggerate. The same is largely true for Starlink, SpaceX’s ambitious internet satellite constellation program. It may be true that Starship will eventually make Crew and Cargo Dragon (as well as Falcon 9 and Falcon Heavy) wholly redundant, but that is likely years away and SpaceX will support NASA – as it is contractually required to – for as long as the space agency has vested interest in using Crew Dragon.

At the same time, NASA has explicitly and publicly chosen to prioritize safety over schedule with the Commercial Crew Program, accepting the possibility of delays and cost overruns to ensure that SpaceX and Boeing can build the safest spacecraft possible.

In a September 28th interview with CNN, Musk bluntly noted that the hardware was – at this point in time – more or less ready for flight and will be on-site at SpaceX’s Pad 39A Florida launch site within the next two months. According to Musk, from then on, any additional launch delays can almost entirely be attributed to the paperwork and reviews NASA must complete before giving SpaceX the go-ahead. If Bridenstine wants SpaceX to launch astronauts sooner, one – and possibly the only – solution is to tackle the roadblocks created by NASA’s own self-enforced red tape. The question, then, is whether Bridenstine wants to cut away red tape that may (or may not) be there for good reason.

WHEN THE POT CALLS THE KETTLE BLACK

Detached from whining about a contractor’s CEO presenting about a non-NASA program, complaining about Commercial Crew delays is at least slightly more reasonable. Originally intended to launch as early as 2015, Congress systematically underfunded the Commercial Crew Program by more than 50% for over half a decade, dispersing $2.4B of the $5.8B NASA requested from 2011 to 2016. Unsurprisingly, this completely upended Boeing and SpaceX development schedules. By September 2014, SpaceX aimed to have Crew Dragon certified by NASA for astronaut transport before the end of 2017, but even then, NASA already saw that schedule as overly optimistic.

It would be another two years before Congress began to seriously fund Commercial Crew at its requested levels, beginning in FY2016. In response to Bridenstine, former NASA deputy administrator Lori Garver noted that over the ~5 years Congress consistently withheld hundreds of millions of dollars of critical funds from Commercial Crew, NASA’s SLS rocket and Orion spacecraft were just as consistently overfunded above and beyond their budget requests. From 2011 to 2016 alone, SLS and Orion programs requested $11B and received an incredible $16.3B (148%) from Congress, while Commercial Crew requested $5.8B and received $2.4B (41%).

Ironically, despite literally receiving almost seven times as much funding as Crew Dragon and Starliner, SLS and Orion are arguably just as – if not more – delayed than their commercial brethren. Originally intended to launch an uncrewed test flight in 2017, there is now little to no chance that that mission (known then as EM-1 and now as Artemis-1) will launch before 2022, a delay of roughly half a decade. The cost of the SLS/Orion program recently crested $30B, a figure likely to grow to ~$40B before it has conducted a single launch. Of that funding, approximately a third has gone to Boeing, the primary contractor responsible for NASA’s comically-delayed SLS Core Stage – the orange booster pictured above.

The Commercial Crew development program will likely cost NASA $8B total over 9-10 years and produce two clean-sheet, high-performance, (relatively) low-cost crewed spacecraft. After their demonstration launches are completed, NASA will transition to fixed-price service contracts with SpaceX and Boeing to routinely send astronauts to the ISS several times per year.

Put simply, if Bridenstine actually cared about defending “the investments of the American taxpayer” more than wielding their sanctity as a political weapon, he wouldn’t have folded like a house of cards at the slightest resistance to his attempts to cull SLS/Orion delays and cost overruns, and he certainly wouldn’t be wasting breath complaining about what SpaceX’s CEO is or isn’t talking about.