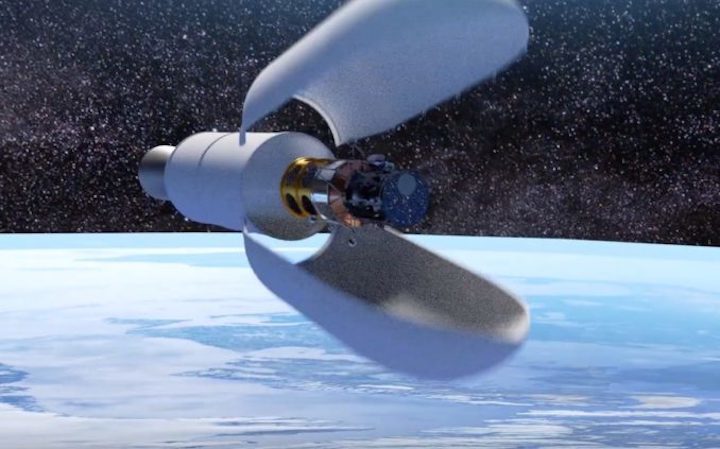 Intuitive Machines confirmed plans Wednesday to launch a commercial lunar lander aboard a SpaceX Falcon 9 rocket from Florida’s Space Coast in 2021 on a mission to deliver multiple payloads to the moon, including up to five science instruments for NASA.

The Houston-based company’s first robotic Nova-C lander will carry up to 220 pounds, or 100 kilograms, of payloads to the moon’s surface. Launch and landing are scheduled for July 2021, according to Trent Martin, vice president of aerospace systems at Intuitive Machines.

Intuitive Machines previously stated plans to launch the first Nova-C mission on a SpaceX rocket, but Martin said in an interview Wednesday that the company held a “fully open competition” among multiple launch service providers before signing a contract for a Falcon 9 launch.

In a statement, Intuitive Machines said it “ultimately selected SpaceX for its proven record of reliability and outstanding value.” The company said the Nova-C mission will take off from pad 39A at NASA’s Kennedy Space Center in Florida.

Intuitive Machines is one of three companies selected by NASA in May to carry government-sponsored science instruments to the moon through the Commercial Lunar Payload Services, or CLPS, program.

Astrobotic, a Pittsburgh-based company, announced in August that its Peregrine lunar lander will fly into space aboard the first flight of United Launch Alliance’s next-generation Vulcan Centaur rocket. NASA terminated the CLPS task order of another company, OrbitBeyond, in July.

The CLPS missions are designed to provide transportation for science instruments to the moon in advance of a human landing planned under NASA’s Artemis program.

“Intuitive Machines is thrilled to sign with SpaceX to take Nova-C on its first mission to the moon,” said Steve Altemus, the company’s president and CEO, in a statement. “SpaceX’s ability to make low-cost quality lunar transport is paramount to completing NASA’s Commercial Lunar Payload Services contract and Intuitive Machines becoming the first commercial company to land on the moon.”

“We’re honored that Intuitive Machines selected Falcon 9, SpaceX’s tried and true workhorse, for this pioneering mission to the moon, said Gwynne Shotwell, president of SpaceX. “Our partnership with Intuitive Machines is a great example of two private companies working together with NASA to advance space exploration.”

The Nova-C lander will likely launch on a rideshare mission with other spacecraft on the same Falcon 9 rocket, Martin said.

“They don’t specify it in that way, but essentially, we’re a primary (payload),” Martin said. “The reason it’s a rideshare is we weigh 1,700 kilograms (about 3,750 pounds), so they have remaining mass available.”

The Nova-C lander could launch into an elliptical geostationary transfer orbit, or GTO, a common drop-off for large communications satellites with a high point tens of thousands of miles above Earth. In that case, the Nova-C spacecraft would use its own propulsion system for a trans-lunar injection, or TLI, maneuver to escape Earth’s orbit and fly to the moon.

“Depending on their rideshare, they could have someone that goes to GTO and we can do our own TLI, or there’s a possibility they could throw us (directly toward the moon), so we’re protecting for both,” Martin said Wednesday.

The Nova-C lander’s main engine and control thrusters will burn methane mixed with liquid oxygen. Both propellants must be stored at temperature between minus 250 and minus 300 degrees Fahrenheit to remain in liquid form.

Martin said SpaceX offered Intuitive Machines a unique arrangement to load cryogenic propellants on the Nova-C lander through a fluid connector into the rocket’s payload fairing until the final minutes before liftoff.

“One of the key reasons we went with SpaceX for our launch is that we are getting a top-off of LOX (liquid oxygen) and methane very late, in fact, almost up to launch,” Martin told Spaceflight Now. “That allows us to top off and keep it full up until launch, which was our biggest concern when it came to cryogenic storage. Once we’re in space, our system, although it’s a cryogenic system, is fairly easy to store, and our mission duration is fairly short. So we can do that with some relatively nominal efforts for storing cryogens in space.”

The Nova-C lander’s first mission will be relatively short, Martin said. Mission planners anticipate around six days from launch until the spacecraft’s landing on the moon, and the Nova-C lander is designed to operate on the surface for around 13-and-a-half days during one lunar day.

The short duration of the mission will mitigate concerns about boil-off of methane and liquid oxygen in space, he said.

The methane-fueled main engine on the Nova-C lander can be throttled to control the craft’s descent to the lunar surface. Methane is more efficient than other propellants, such as hydrazine, and could be produced using resources on other planets, such as Mars.

The Nova-C traces much of its design heritage to Project Morpheus, a tech demo project led by engineers at NASA’s Johnson Space Center that tested a methane-fueled descent engine, hazard avoidance sensors, and other lunar landing hardware during a series of tests at the Kennedy Space Center in Florida from 2012 through 2014.

Intuitive Machines is designing larger landers to carry heavier payloads of up to a metric ton to the moon, according to Martin.

In May, Altemus said the Nova-C lander is fully funded to complete development for its first mission. Martin reiterated that in an interview Wednesday.

About 121 pounds (55 kilograms) of the lander’s 220-pound payload allotment is filled for the first mission.

“We’re actively pursuing other customers to fill up that remainder,” Martin said.

“For this first mission, the business case closes, but we prefer not to launch with empty space,” he said.

NASA tasked Intuitive Machines with a $77 million contract to deliver up to five science payloads to the Ocean of Storms region of the moon on the first Nova-C mission.

The payloads flying on the first Nova-C mission include a navigation doppler lidar for range measurements during descent, stereo cameras, a navigation demo payload, sensors to conduct radio wave observations, and a retroreflector.