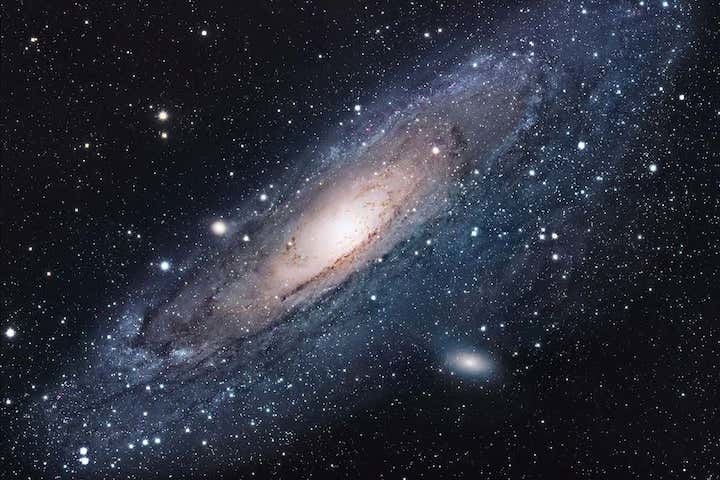 Andromeda, our nearest major galaxy, has feasted on several galaxies during its lifetime, gobbling them up and incorporating their stars into itself. Now we know the feast went down in two distinct phases.

We know Andromeda ate other galaxies because it has a large halo of stars dotted around its periphery. These seem to have been caught in the galaxy’s orbit during collisions with smaller, dwarf galaxies. But untangling how and when these collisions happened involves analysis of the leftover star debris, which isn’t easy.

Geraint Lewis at the University of Sydney, Australia, and an international team of researchers studied the halo using data from the Pan-Andromeda Archaeological Survey. They focused on groups of millions of stars that are packed together in spheres known as globular clusters. “We are cosmic archaeologists, except we are digging through the fossils of long-dead galaxies rather than human history,” says Lewis.

These clusters would have retained a degree of structure from their parent dwarf galaxy for a while after they were captured by Andromeda. But this would have gradually disappeared as the galaxy broke down. Lewis and his colleagues traced what remains of these structures.

They found that half of the clusters were orbiting one way around Andromeda’s core and the other half were orbiting in a perpendicular orientation. The first group still have some of their substructure intact, suggesting the collision that created them happened relatively recently – probably only a few billion years ago. The second group of clusters retain less of their original structure, suggesting they were swallowed around 7 to 10 billion years ago.

Lewis says he was expecting to find some trends in the cluster distribution, but seeing two distinct binges on other galaxies by Andromeda caught him by surprise.

Even stranger, the older of the two groups of clusters seems to line up with the orbit of a collection of dwarf galaxies that are still orbiting Andromeda today. These galaxies are known to be relatively young, and yet they appear in the same orbit as the older group of galaxies that Andromeda dined on.