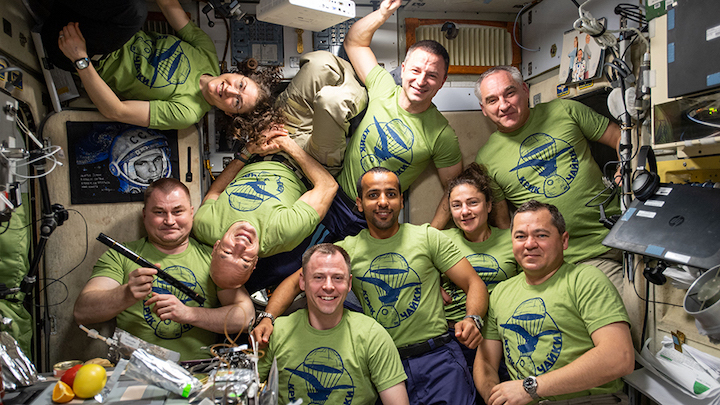 Two Expedition 60 crewmates and a visiting astronaut are returning to Earth on Thursday. The orbiting Expedition 61 residents staying on the International Space Station will then turn their attention to a series of spacewalks set to begin this weekend.

Commander Alexey Ovchinin handed over control of the orbiting complex today to astronaut Luca Parmitano of ESA (European Space Agency) during the change of command ceremony. The Expedition 61mission will officially begin when the three Expedition 60 crewmates depart the station.

NASA astronaut Nick Hague is returning to Earth with Ovchinin and visiting astronaut Hazzaa Ali Almansoori of the United Arab Emirates. The trio will board the Soyuz MS-12 crew ship and undock from the station’s Rassvet module on Thursday at 3:36 a.m. EDT. They will parachute to landing in Kazakhstan at 7 a.m. (5 p.m. Kazakh time).

There was still time for research today as NASA Flight Engineer Andrew Morgan took turns with Parmitano exploring cognition and motion in space. Morgan also installed the Small Optical Communication System, or SOLISS, that is testing the real-time downlink of large amounts of data from the station.

The first of five spacewalks to upgrade power systems on the orbital complex starts Sunday at 7:50 a.m. NASA astronaut Christina Koch will join Morgan and exit the station’s Quest airlock in their U.S. spacesuits to begin installing new lithium-ion batteries on the Port-6 truss structure. The duo will work outside in the vacuum of space for about six hours and 30 minutes.

Station Gears Up for Spacewalks as Christina Koch Hits 200 Days 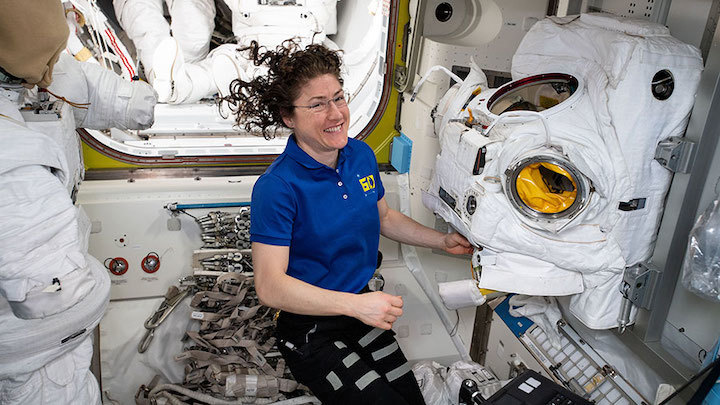 The International Space Station is gearing up for a record pace of spacewalks this year. The Expedition 61 spacewalkers will upgrade the orbiting lab’s power systems and repair a cosmic particles detector. NASA TV will preview the upcoming spacewalks during a live briefing on Friday at 2 p.m. EDT.

The first spacewalk is set for Sunday, Oct. 6, with NASA astronauts Christina Koch and Andrew Morgan. The duo will begin installing new lithium-ion batteries delivered last week aboard Japan’s HTV-8 cargo craft. There will be four more spacewalks in October to continue the activation of the new batteries on the station’s Port-6 truss structure.

ESA (European Space Agency) astronaut Luca Parmitano will assist the spacewalkers in and out of their spacesuits as well as guide them during their spacewalk. He and Flight Engineer Jessica Meir joined Koch and Morgan on Tuesday for a procedures review and conference with specialists on the ground.

Another set of spacewalks will see the installation of an upgraded thermal control system on the Alpha-Magnetic Spectrometer (AMS) that has been in service since May 2011. The automobile-sized astrophysics device, attached to the Starboard-3 truss structure, is seeking evidence of antimatter and dark matter. The AMS uses a magnetic field to detect and identify the sign of electrically charged cosmic ray particles.

Koch has reached the 200-day milestone today in her extended mission aboard the space station. She will stay in space for more than 300 days and set a record for the longest single spaceflight by a woman, eclipsing the record of 289 days set by former NASA astronaut Peggy Whitson in 2016-17.