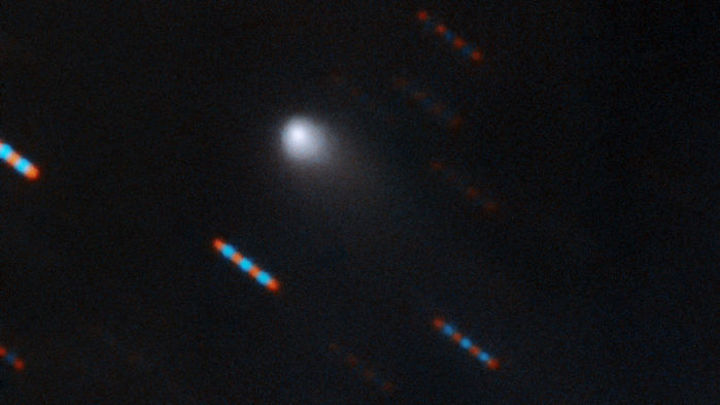 Just weeks after the discovery of the second-ever comet from outside of our solar system (the first was the cigar-shaped ‘Oumuamua), astronomers have detected gas emitted from its surface—the first hint of what an interstellar traveler is made of.

Sadly, it’s not kryptonite, or even unobtanium, but cyanogen, a simple but toxic molecule made up of two carbon and two nitrogen atoms. The comet, dubbed 2I/Borisov, was first spotted on 30 August by Ukrainian astronomer Gennadiy Borisov. Later observations showed it was moving in an orbit not bound by the sun’s gravity. Since then, many astronomers have studied the object including a team using the 4.2-meter William Herschel Telescope (WHT) in Spain’s Canary Islands.

2I/Borisov is very close to the sun in the sky, so observing it is tricky with the sun’s glare so close. After one unsuccessful attempt to gather enough light from the comet to get a spectrum, the WHT team succeeded on 20 September. In a paper submitted to Astrophysical Journal Letters, the team says that in the ultraviolet part of the spectrum there was a clear spike at a wavelength known to be emitted by cyanogen gas, suggesting that as 2I/Borisov is warmed by the sun’s heat, the gas is evaporating off.

Cyanogen is often found surrounding comets originating within our own solar system, so wherever 2I/Borisov comes from is probably not too different. But as the visitor moves toward its closest approach to the sun in early December—and continues to heat up—observers will be keenly watching for the off-gassing of more exotic alien ingredients.