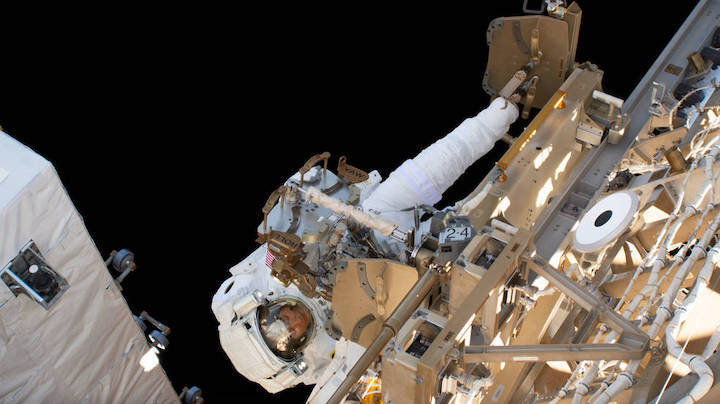 Editor’s Note: This media advisory was updated on Oct. 1 to reflect the spacewalk news briefing now is at 2 p.m. EDT Friday, Oct. 4.  Media wishing to participate in the briefing in person must request credentials from the Johnson newsroom no later than 4 p.m. Thursday, Oct. 3. Media interested in participating by phone must contact the newsroom by 1:45 p.m. Oct. 4.

Astronauts aboard the International Space Station plan to conduct what may become a record pace of 10 complex spacewalks during the next three months, a cadence that has not been experienced since assembly of the space station was completed in 2011.

Experts will discuss those plans in a briefing at 2 p.m. EDT Tuesday, Oct. 1, at NASA’s Johnson Space Center in Houston. Live coverage of the briefing and all spacewalks will air on NASA Television and the agency’s website.

The station crew will replace some of the orbiting laboratory’s solar array batteries during the first half of the spacewalks and then refurbish a renowned scientific instrument that explores the fundamental nature of the universe during the final five excursions.

Media wishing to participate in the briefing in person must request credentials from the Johnson newsroom no later than 4 p.m. Monday, Sept. 30. Media interested in participating by phone must contact the newsroom by 1:45 p.m. Oct. 1.

Participants in the briefing are:

The first of a set of five spacewalks is scheduled to begin on Sunday, Oct. 6, at about 7:50 a.m. Live NASA Television coverage will begin at 6:30 a.m. This series of spacewalks is dedicated to replacing batteries on the far end of the station’s port truss. The existing nickel-hydrogen batteries will be upgraded with newer, more powerful lithium-ion batteries transported to the station aboard the Japanese H-II Transfer Vehicle, which arrived Saturday, Sept. 28. These spacewalks continue the overall upgrade of the station’s power system that began with similar battery replacement during spacewalks in January 2017.

The second half of this sequence of spacewalks will focus on repairs to the space station’s Alpha Magnetic Spectrometer. Dates for those spacewalks still are being discussed, but they are expected to begin in November.