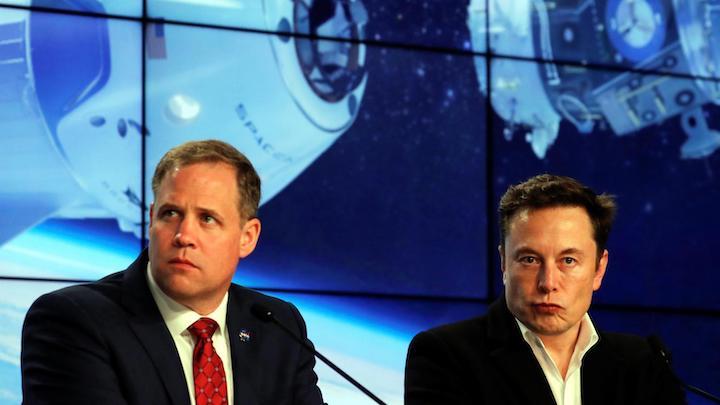 The night before Elon Musk revealed the latest plans for his next-generation Starship, NASA administrator Jim Bridenstine set out to rain on the rocket-maker’s parade with a tweet.

“I am looking forward to the SpaceX announcement tomorrow,” the former Oklahoma congressman wrote on Sept. 27. “In the meantime, Commercial Crew is years behind schedule. NASA expects to the same level of enthusiasm focused on the investments of the American taxpayer. It’s time to deliver.”

Bridenstine is right that NASA’s plan to hire private companies to fly astronauts to the International Space Station (ISS), called commercial crew, is years behind schedule. To be fair, NASA’s Inspector General has blamed early funding shortfalls for at least two years of delay.

More shocking to observers of the space program is Bridenstine’s decision to call out the chief executive of a NASA contractor before a public event. Boeing, the other company building a spacecraft for the commercial crew program, is also well behind schedule on that project, as well as on the SLS rocket it is building for NASA. Bridenstine has never challenged its CEO, Dennis Muilenburg, ahead of a public appearance.

Asked if Bridenstine could clarify where he saw SpaceX falling short or what problems needed to be addressed, a NASA spokesperson said no further comment would be forthcoming.

“From a SpaceX resource standpoint, our resources are overwhelmingly on Falcon and Dragon,” Musk said of the company’s rocket and crew-carrying spacecraft when asked about Bridenstine’s comment yesterday. “It was really quite a small percentage of SpaceX on Starship, less than 5% of the company, basically. The really hard part that requires a lot of resources is optimizing something, and bringing it into volume production. To be clear, the vast majority of our resources are on Dragon and Falcon, especially Crew Dragon.”

Despite a successful dry-run flight to the ISS in February, SpaceX has come under scrutiny after a Dragon spacecraft was destroyed during an uncrewed test in April. NASA and SpaceX said in July that they had identified and mostly solved the problem. Work continues, with a dry run for emergency procedures taking place Sept. 18.

Some at NASA, not authorized to speak publicly, say they wonder where Musk’s personal focus is. SpaceX’s chief designer tweeted in August that he was working seven days a week on Starship, and during Tesla’s troubled 2018, he said he was sleeping on the factory floor.

But other NASA employees said they were disappointed to see SpaceX, which has played a significant role pushing the space program into the 21st century, singled out among a bevy of delayed projects.

At least some commercial crew hold-ups stem from NASA’s pace overseeing test results to certify a vehicle meets its standards for flying astronauts. In July, Bridenstine fired the head of NASA’s human exploration division, Bill Gerstenmaier, largely over delays to Boeing’s SLS rocket. Bridenstine has yet to replace Gerstenmaier, who was the top government executive overseeing the commercial crew program.

Boeing still needs to perform an uncrewed test flight and a test of its in-flight safety abort system. SpaceX has to do just the flight abort test. NASA has not yet announced dates for any of these critical steps, or what might be delaying them.

After the February test flight, Musk and Bridenstine were practically putting on a buddy-comedy routine. Without more information about what’s happening within the commercial crew program, it’s hard to know what’s at the heart of this disagreement.

One pressure point is Bridenstine’s efforts to win political support for the Trump administration’s plan to return astronauts to the moon in 2024. With Congress dubious about funding the Artemis mission and Boeing flexing its political muscles in Washington, tweaking SpaceX could be a move to win over the space establishment.

Raumfahrt - What’s going on with Elon Musk and the head of NASA?
1237 Views
Created with page4