The NASA/ESA Hubble Space Telescope's Wide Field Camera 3 observed Saturn on 20 June 2019 as the planet made its closest approach to Earth this year, at approximately 1.36 billion kilometres away. 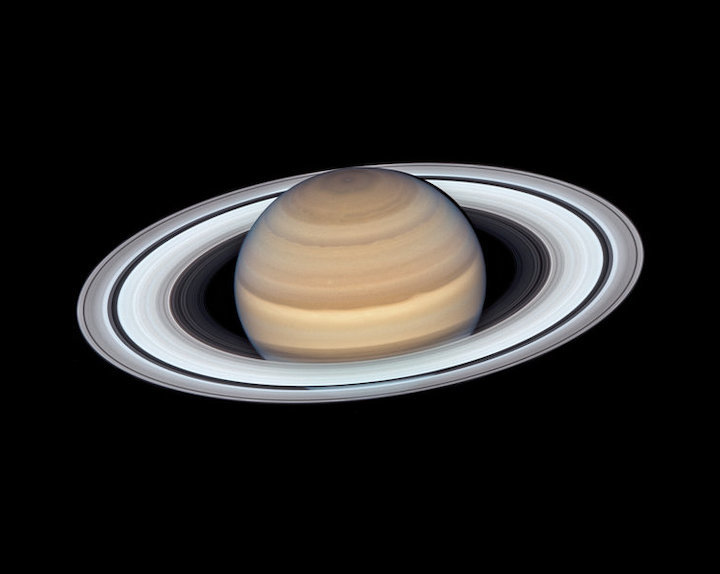 Since the Hubble Space Telescope was launched, its goal has been to study not only distant astronomical objects, but also the planets within our Solar System. Hubble's high-resolution images of our planetary neighbours can only be surpassed by pictures taken from spacecraft that actually visit these bodies. However, Hubble has one advantage over space probes; it can look at these objects periodically and observe them over much longer periods than any passing probe could.

Saturn hosts many recognisable features, most notably its trademark ring system, which is now tilted towards Earth. This gives us a magnificent view of its bright icy structure. Hubble resolves numerous ringlets and the fainter inner rings. Dutch astronomer Christiaan Huygens first identified the rings in 1655 and thought they were a continuous disk encircling the planet, but we now know them to be composed of orbiting particles of ice and dust. Though all of the gas giants boast rings, Saturn's are the largest and most spectacular.

The age of Saturn's ring system continues to be debated. And, even more perplexingly, it's unknown what cosmic event formed the rings. There is no consensus among planetary astronomers today.

Another intriguing feature is the long-lasting hexagon-shaped structure circling the planet's north pole. It is a mysterious six-sided pattern caused by a high-speed jetstream. The hexagon is so large that four Earths could fit inside its boundaries (there is no similar structure at Saturn's south pole).

Other features, however, are not as long-lasting. A large storm in the north polar region spotted by Hubble last year has disappeared. Smaller, convective storms, such as the one just above the centre of the planet's image, also come and go.

Saturn's amber colours come from summer smog-like hazes, produced in photochemical reactions driven by solar ultraviolet radiation. Below the haze lie clouds of ammonia ice crystals, as well as deeper, unseen lower-level clouds of ammonium hydrosulphide and water. The planet's banded structure is caused by the winds and clouds at different altitudes.

Saturn's appearance changes with its seasons, caused by the planet's 27-degree axial tilt. This image was taken during summer in the planet's northern hemisphere.

This image is the second in a yearly series of snapshots taken as part of the Outer Planets Atmospheres Legacy (OPAL) project. OPAL is helping scientists to understand the atmospheric dynamics and evolution of our Solar System's gas giant planets. In Saturn's case, astronomers will be able to track shifting weather patterns and other changes to identify trends.