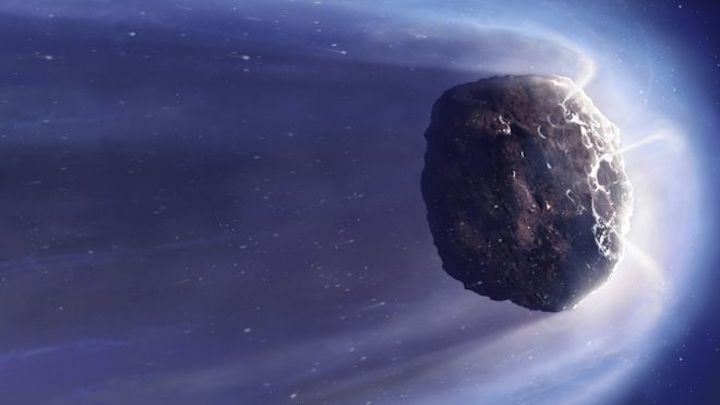 An amateur astronomer has discovered a comet that could come from outside our Solar System.

If so, it would be the second interstellar object after the elongated body known as 'Oumuamua was identified in 2017.

The Minor Planet Center (MPC) at Harvard University has issued a formal announcement of the discovery.

The body appears to have a "hyperbolic" orbit, which would appear to indicate its origin in another planetary system.

A hyperbolic orbit is an eccentric one, where the shape deviates substantially from that of a perfect circle.

A perfect circle has an eccentricity of 0. The elliptical orbits of many planets, asteroids and comets have eccentricities between 0 and 1.

The newly discovered object - initially given the designation gb00234, but now known as Comet C/2019 Q4 (Borisov) - has an eccentricity of 3.2, based on current observations.

It was noticed by the amateur stargazer Gennady Borisov on 30 August at the Crimean Astrophysical Observatory in Bakhchysarai. At the time, it was about three astronomical units (about 450 million km) from the Sun.

'Oumuamua, discovered on 19 October 2017, was initially classified as a comet, based on its hyperbolic trajectory. But further observations detected no sign of a coma - the fuzzy envelope around the nucleus of a comet. C/2019 Q4 (Borisov), on the other hand, is clearly an active comet, with a visible coma and tail.

Unlike the small, faint 'Oumuamua, the new object seems to be very large - around 20km wide - and bright.

In addition, 'Oumuamua was also spotted after its closest approach to the Sun (perihelion), so it wasn't visible long enough for astronomers to answer the many questions they had. C/2019 Q4 (Borisov), meanwhile, is still approaching our Solar System and shouldn't reach perihelion until 10 December.

The Minor Planet Center announcement called on astronomers to make follow-up observations. According to the MPC, "absent an unexpected fading or disintegration, [C/2019 Q4] should be observable for at least a year".

This would give observers an exciting opportunity to characterise the properties of an object that could have originated around a distant star.

Astrophysicist Karl Battams, from the Naval Research Laboratory in Washington DC, tweeted: "Unlike 'Oumuamua, whose asteroid-or-comet nature still gets debated, this one is definitely a comet.

"If it is unequivocally interstellar, it'll be fascinating to see how its composition (spectral properties) compares to the variety we see in comets from our own Solar System."

Astrophysicist Simon Porter, from the Southwest Research Institute (SwRI) in San Antonio, Texas, who has been tracking the object, added on Twitter: "With such a bright coma, we should be able to get beautiful spectra of Q4 and hopefully measure isotopic ratios."

Isotopes are different forms of the same chemical element. He added that these ratios could be different from those of "domestic" comets.

It appears to be a comet from another star system

An object that seems to be a comet from around another star is speeding through the solar system. This comet, dubbed C/2019 Q4 (Borisov), marks the second time that astronomers have seen an interstellar visitor on its way past the sun.

Ukrainian amateur astronomer Gennady Borisov spotted the comet on August 30. In the days that followed, other astronomers took enough observations of the comet to show that its orbit is not bound to the sun, a telltale sign that the object is from interstellar space, says astrophysicist Matthew Holman. He is the interim director of the International Astronomical Union’s Minor Planet Center in Cambridge, Mass., which reported C/2019 Q4’s trajectory September 11 in a public bulletin.

“There have been three or four different groups that have checked the orbit and poked at it from different directions, and everybody reaches the same conclusion,” Holman says. But he cautions that the comet is close to the sun and low on the horizon, which make it difficult to observe.

“This is an unusual thing. You always want to be extra careful when you get an answer that’s not typical,” he says. “That said, I think it will hold up.”

The first known interstellar object, named ‘Oumuamua, was spotted in October 2017 as it sped away from the solar system (SN: 10/27/17). Astronomers could only grab fleeting glimpses of ‘Oumuamua on its way out the door. That left many theories for what the object was — an asteroid, a fluffy ice fractal, a skeleton of a comet, even an alien spaceship. But little data existed to back up any of those ideas (SN: 2/27/19). 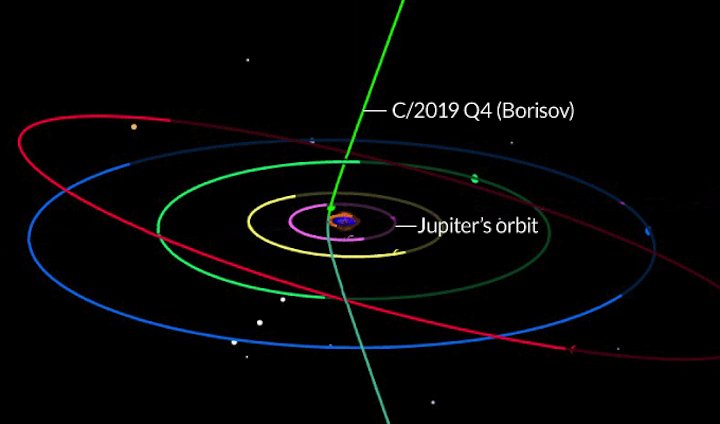 C/2019 Q4, on the other hand, is just past the solar system’s doorstep, on a trajectory that will take it between the orbits of Jupiter and Mars. It will make its closest approach to Earth (at about twice the distance between Earth and the sun) on December 29.

“It’s going to be a nice Christmas comet,” says astronomer Michele Bannister of Queen’s University Belfast in Northern Ireland. The object will remain in view for several months after that.

In total, “we’ll be able to observe it for probably a year, which is really different from ‘Oumuamua,” Holman says. ‘Oumuamua was tracked for a short 2.5 months before it became too faint to see.

Already, C/2019 Q4 looks different from its predecessor. ‘Oumuamua resembled an asteroid more than a comet, with no obvious cloud of gases. C/2019 Q4 is surrounded by a bright cometlike halo, indicating that it’s sloughing off gas and dust.

That cometlike appearance is more like what astronomers expected from the first interstellar object than ‘Oumuamua was, Bannister says. Comets are a type of leftover planetary building block, called planetesimals, and most planetesimals form far from their stars and are therefore icy. Most stars end up losing their small planetesimals, either while planets are forming or after the star dies. “Almost all the planetesimals that each planetary system makes end up being scattered out to go wander the galaxy,” Banister says.

Further observations will reveal more about C/2019 Q4’s orbit, size and origin. Astronomers will also be able to tease out the comet’s composition and see how different it is from our solar system’s comets.