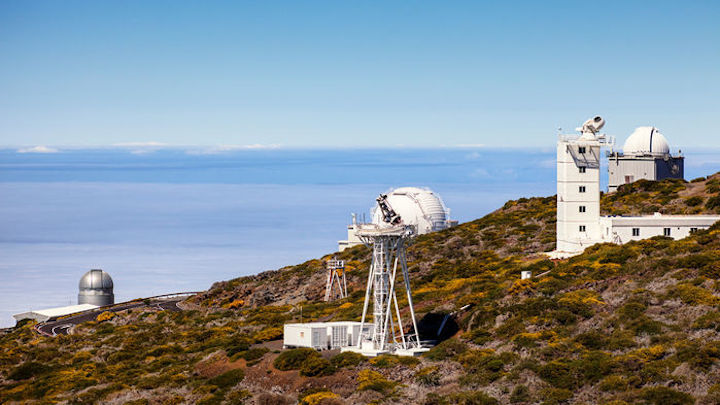 Astronomers say La Palma, one of Spain’s Canary Islands, is not an ideal site for a giant telescope.

The Native Hawaiian protesters blocking the construction of the Thirty Meter Telescope (TMT) on the summit of Mauna Kea appear to have settled in for the long haul. After 2 months of protests, their encampment on the Mauna Kea access road has shops, a cafeteria, and meeting spaces. “It’s like a small village,” says Sarah Bosman, an astronomer from University College London who visited in July. “There are signs up all over the island. It was a bit overwhelming really.”

The stalemate between astronomers eager to build one of the world’s next great telescopes and opponents, many of whom believe the site is sacred, has shifted attention to the TMT’s “plan B,” an alternative site on La Palma, one of Spain’s Canary Islands off the coast of Morocco. But La Palma is looking like another bed of nails for the project.

Astronomers say that the 2250-meter-high site, about half as high as Mauna Kea, is inferior for observations. Canada, one of six TMT partners—which also include Japan, China, India, the California Institute of Technology, and the University of California—is especially reluctant to make the move and could withdraw from the $1.4 billion project, which can ill afford to lose funding. Finally, an environmental group on La Palma called Ben Magec is determined to fight the TMT in court and has succeeded in delaying its building permit. It says the conservation area that the TMT wants to build on contains archaeological artifacts. “They’re willing to fight tooth and nail to stop TMT,” says Thayne Currie, an astronomer at the NASA Ames Research Center in Mountain View, California.

The TMT is one of three planned giant telescopes, which would use mirrors tens of meters across to catch light from the universe’s first galaxies and planets around other stars. Construction has begun in Chile on the other two, the U.S.-led Giant Magellan Telescope (GMT) and Europe’s Extremely Large Telescope (ELT).

The TMT board began to look for an alternate site in 2016, after protesters halted the project’s first attempt to start construction and persuaded a court that its building permit was invalid. TMT researchers compared Mauna Kea with six potential sites in India, China, Chile, Mexico, and Spain. The two Asian sites were discounted because construction would be too slow and costly. The Mexican site was deemed too remote. One of the two Chilean sites, Cerro Honar, was by far the best for observing, with an altitude 1350 meters higher than Mauna Kea and dry, clear weather. But the cost of building at such a high and remote site looked prohibitive, and astronomers wanted one of the three giant telescopes to be in the Northern Hemisphere, to see parts of the sky that are invisible in the south.

That left La Palma, and its Roque de los Muchachos Observatory (ORM). Perched at the highest point of this small volcanic island and home to more than a dozen telescopes, the ORM has been run by the Canary Islands Institute of Astrophysics (IAC) in La Laguna since 1985. With good roads and a nearby port and airport, construction could be comparatively speedy.

As the new effort to start construction on Mauna Kea stalled, TMT managers and news reports suggested La Palma is a perfectly good backup site. Many astronomers disagree. The ORM’s low elevation means there is more atmosphere to peer through—a particular problem at midinfrared wavelengths, which are strongly absorbed by water vapor. The TMT study found La Palma would have substantially fewer nights dry enough for midinfrared observing, which might compromise plans to scrutinize the atmospheres of exoplanets for biosignatures, or see the very earliest galaxies, whose light has been shifted into the midinfrared by the expansion of the universe. “The midinfrared is a huge scientific frontier,” says Ray Carlberg, an astronomer at the University of Toronto in Canada and former TMT board member.

Rafael Rebolo, director of IAC, counters that the 10.4-meter Gran Telescopio Canarias, now the world’s largest, successfully operates from the ORM—even in the midinfrared. “We have a continuous record of sky quality over time that shows how stable and how good the conditions are.” Rebolo says hosting the TMT would bring needed jobs to the island, and has the support of national and island governments. Spanish astronomers, who will have access to the ELT through the European Southern Observatory, would receive a welcome windfall: In exchange for access to the ORM’s infrastructure, they would receive 10% of the TMT’s observing time.

But a move to La Palma would dismay many project partners. “There are a lot of negative implications,” says John O’Meara, chief scientist for the twin W. M. Keck Observatory telescopes on Mauna Kea. He says the Keck planned to work in partnership with the TMT on instrument design in what would be “a symbiotic relationship.” Other partners planned similar collaborations between the TMT and their own telescopes and staff on Mauna Kea, including Japan and its Subaru Telescope and Canada with the Canada-France-Hawaii Telescope. In a statement, the National Astronomical Observatory of Japan says its stance has not changed: “TMT should be constructed on the best site, Mauna Kea.” (China is one of the few partners that has questioned the Mauna Kea site, citing recent problems obtaining U.S. visas for its researchers.)

Canada had favored Cerro Honar as the best backup site, so when the TMT chose the ORM, Canadian funders set up an independent committee to assess the implications. Its 2017 report concludes that Mauna Kea is “strongly preferred” and that the ORM “offers no significant advantages” over alternatives in Chile.

The Canadian report also notes that “the biggest threat to the TMT is its financial position.” Like the other giant telescopes, the TMT is not yet fully funded, and it has pinned its hopes on winning support from the U.S. National Science Foundation (NSF) by making a joint bid with the GMT. “This collaboration is what’s needed to make TMT feasible,” says Michael Balogh of the University of Waterloo in Canada. But NSF may be less inclined to support such a proposal now that one telescope is under a cloud and both may be built outside of the United States, Carlberg says. “It’s hard to imagine the U.S. government being particularly eager to be involved in this mess,” he says.

Perhaps the TMT’s most dreaded scenario is moving to La Palma and ending up in the same kind of legal and political quagmire that stalled the project in Hawaii. Ben Magec, which has fought tourist developments on the islands since the 1980s, is trying to make that happen. Spokesperson Pablo Batista says the proposed TMT site—which would expand the footprint of the ORM by 5%—is a protected conservation area and includes three archaeological sites with petroglyphs from people who lived there thousands of years ago. He says the group has been meeting with TMT officials since 2016 but the project has chosen a site “that would have the greatest environmental and cultural impact.” Gordon Squires, the TMT’s vice president for external relations, says an archaeologist would be on hand during construction to preserve artifacts.

After IAC applied to expand the ORM site to make room for the TMT in 2017, Ben Magec appealed to the courts, which revoked the proposed expansion because IAC’s application lacked an environmental impact statement. The TMT had already performed an environmental assessment, which was submitted in June along with a new application. The TMT had hoped to apply for a building permit on La Palma in July, but that will now have to wait for the approval of the ORM expansion, which Rebolo expects to be completed this month.

Ben Magec intends to make the process as slow and as painful as possible. “Every administrative step that the TMT tries to take to build on the chosen site … we are going to take to court,” Batista says. “We will spare no effort.” To TMT leaders, the tone is unsettlingly familiar.