Fast Radio Bursts (FRBs) are one of the most mysterious phenomena in astronomy. They are extremely brief radio signals coming from deep space, beyond our galaxy, and so far, scientists still don’t know what is causing them.M ost of the FRBs have been one-off bursts, and only two to date had been seen to repeat, making them even odder.

But now, scientists have detected eight more repeating FRBs. They were found using the Canadian Hydrogen Intensity Mapping Experiment (CHIME) telescope in south-western British Columbia. The CHIME telescope is located at the Dominion Radio Astrophysical Observatory (DRAO), a national facility for astronomy operated by the National Research Council of Canada.

The new findings were published in a report on Arxiv earlier this month.

Like before, most of these new ones are thought to originate from beyond the Milky Way, but at least one may be a lot closer. 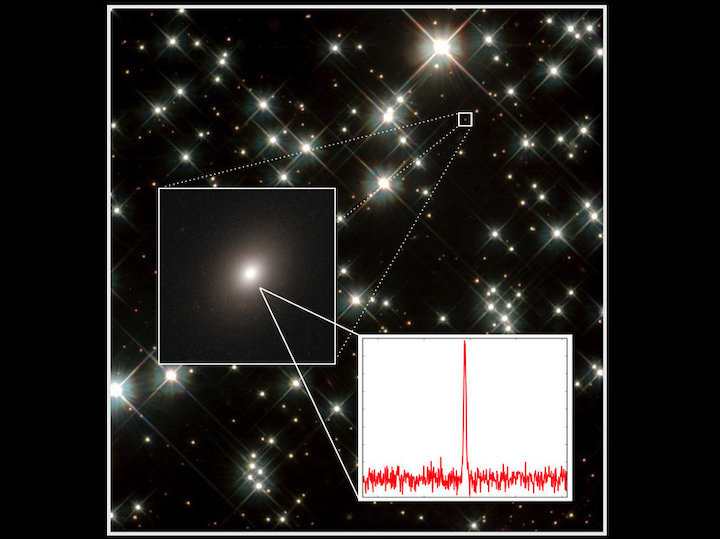 Since the signals only last for milliseconds, yet are very powerful, scientists think that some form of “extreme cosmic events” must be involved. They are distinct from pulsars and quasars, so whatever is causing must be something not seen before.

Theories range from black holes to aliens, and almost anything you could think of in-between.

The repetition tells you something about the cause of these radio flashes. Obviously, you can’t expect that colliding black holes or neutron stars are going to return to their corners and collide again a few days later,” said Seth Shostak, a senior astronomer at the SETI Institute. “Whatever is responsible for this series of bursts has to be an ongoing phenomenon.”

One problem with the aliens theory is that the FRBs originate from all over the sky, coming from galaxies separated by billions of light-years.

“So how could aliens organize so much of the universe to engage in broadcasting the same sort of signal? There’s hardly been enough time since the Big Bang to coordinate such widespread teamwork, even if you can think of a reason for it,” said Shostak.

Repeating FRBs are ideal, since that makes it easier to study them. 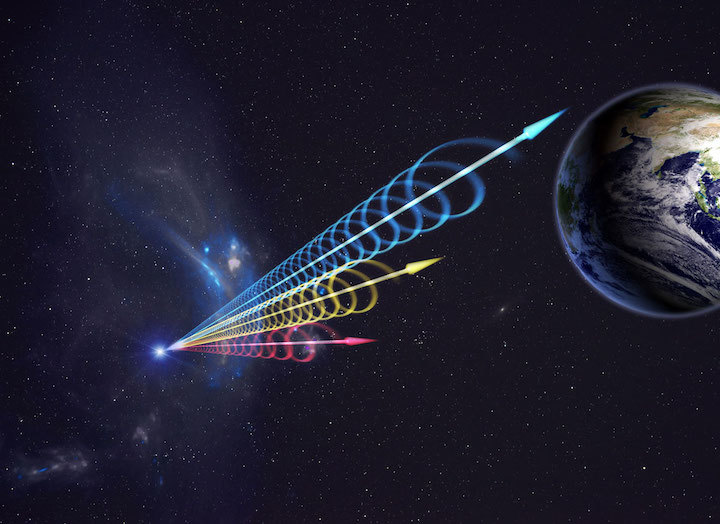 The first repeating FRB, called FRB 121102, was discovered by the Arecibo Observatory in Puerto Rico in November 2012. It was found to originate from a very small dwarf galaxy 3 billion light-years away.

“FRB 121102 is more than merely far, far away and long, long ago,” Shostak said. “It’s more powerful than nearly anything you can name. Indeed, if you assume that energy from the burst is radiated in all directions, then in an eyeblink this object let loose about as much energy as the Sun pumps out in a year. Or if that doesn’t impress you, it’s enough energy to run humanity (at its present, prodigious burn rate) for 10 trillion years.”

That said, an earlier study did seem to find an odd mathematical pattern in the time delay of arrival between the various frequencies of the signals.

In 2015, researchers used the 8.2-m optical Subaru telescope in Hawaii to study FRB 150418. They found an elliptical galaxy sitting right in the middle of the FRB’s point of origin, which led them to identify it as the source of FRB 150418. Spectroscopic measurements of the light coming from the galaxy revealed that the FRB was 6 billion light-years away – almost half the way to the edge of the observable Universe. This was the first measurement of an FRB’s exact distance.

“For the first time, we have identified the host galaxy and measured the distance to a fast radio burst,”said Dr. Tomonori Totani, a professor of astronomy at the University of Tokyo who led the team behind the optical observations of FRB 150418 at the Subaru Telescope. 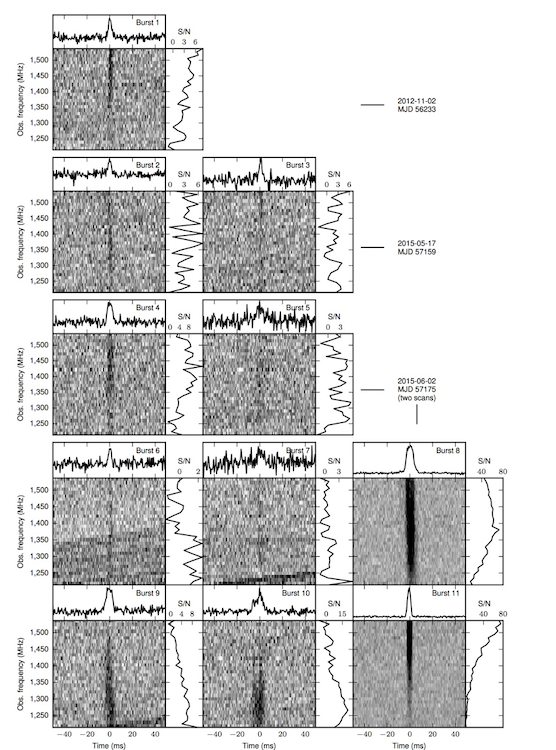 So how does CHIME search for FRBs? From the CHIME website:

“To search for FRBs, CHIME will continuously scan 1024 separate points or “beams” on the sky 24/7. Each beam is sampled at 16,000 different frequencies and at a rate of 1000 times per second, corresponding to 130 billion bits of data per second to be sifted through in real time. The data are packaged in the X-engine and shipped via a high-speed network to the FRB backend search engine, which is housed in its own 40-foot shipping container under the CHIME telescope. The FRB search backend will consist of 128 compute nodes with over 2500 CPU cores and 32,000 GB of RAM. Each compute node will search eight individual beams for FRBs. Candidate FRBs are then passed to a second stage of processing which combines information from all 1024 beams to determine the location, distance and characteristics of the burst. Once an FRB event has been detected, an automatic alert will be sent, within seconds of the arrival of the burst, to the CHIME team and to the wider astrophysical community allowing for rapid follow up of the burst.”

The first FRBs were first discovered by chance in 2007 by a research team, led by Dr. Duncan Lorimer, who was shifting through archival data that had been previously collected with the 64-m radio telescope at Parkes Radio Observatory in Australia.

FRBs are a fascinating enigma, and now, thanks to CHIME detecting eight more repeating signals, scientists are closer to solving this cosmic mystery.