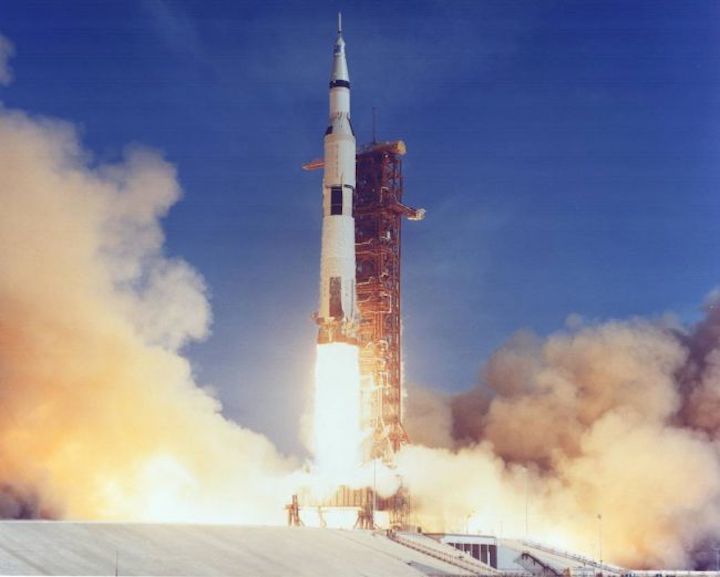 NASA's Saturn V rocket launched the Apollo 11 astronauts towards the moon on July 16, 1969. In a new video, Ron Creel, an Apollo engineer, discusses what happened to the three extra Saturn V rockets that were made.
(Image: © NASA)

Nine Saturn V rockets moved astronauts to the moon between 1969 and 1972, but there were three extras made — and you can still see some of the pieces today,  a retired Boeing engineer says.

These rockets are world-famous for their role in landing the first people on the moon on July 20, 1969, 50 years ago this summer. During this time, NASA launched more than 20 individuals from Earth to the moon with the Apollo 8 and Apollos 10 through 17 missions — with Apollo 11 successfully completing the first lunar landing.

"Where are the three rockets that didn't go to the moon?" Ron Creel, an Apollo engineer, recently asked in a Boeing video posted on Twitter. 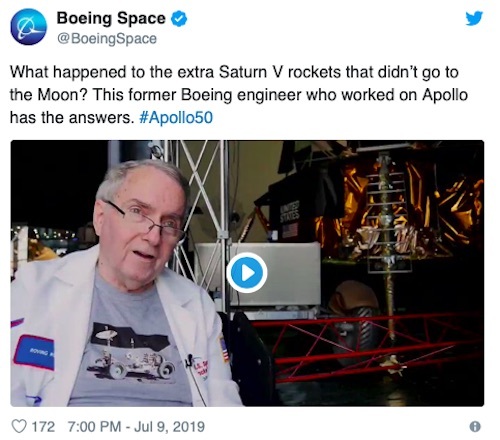 To be clear, Creel wasn't referring to the Earth-orbital test missions that took place as part of NASA's Apollo program, both crewed and uncrewed, during Apollos, 4, 6 and 9. Rather, he's talking about the rockets that were left over at the end of the program.

NASA initially wanted to send crewed missions all the way through Apollo 20, but these plans were cut short when Congress slashed the agency's funding amid other budgetary priorities such as funding the Vietnam War, according to Charles Benson and William Faherty's "Moonport: A History of Apollo Launch Facilities and Operations" (NASA Special Publication-4204, 1978). Because of this, NASA stopped the moon missions at Apollo 17.

"It's a bit of a trick question," Creel said, delving into where NASA's extra three rockets ended up. The public can view one Saturn V rocket at NASA's Johnson Space Center in Houston, and another at the agency's Kennedy Space Center near Orlando, Florida. And, while these are each complete rockets, they include an assortment of stages for the various missions. Neither one includes the full set for either of the missions, Creel explained.

A third Saturn V rocket, a dynamic test vehicle from the Apollo program, is currently on display in the Saturn V Hall at the Davidson Center for Space Exploration at the U.S. Space & Rocket Center, the official visitor center for NASA's Marshall Space Flight Center in Huntsville, Alabama. Additionally, visitors at the center can see a replica of the rocket standing outside at the facility.

"Two of the stages are in the ocean — the Atlantic Ocean, because they were the booster for the Skylab mission," he said about the last rocket. Skylab was the first U.S. space station and launched in 1975 using this Saturn V rocket. The station hosted three crews before deorbiting in 1979.

"The third stage is in Mississippi," Creel said. It was added to the Mississippi Infinity Science Center in 2016, according to Space.com partner CollectSPACE. This was the first stage for Apollo 19, which likely would have taken Mississippi native Fred Haise to the moon as mission commander, the center says on its website. NASA points out that the Apollo 18, 19 and 20 crews were not officially assigned, although you could make predictions based on the usual cycle of crew rotations.