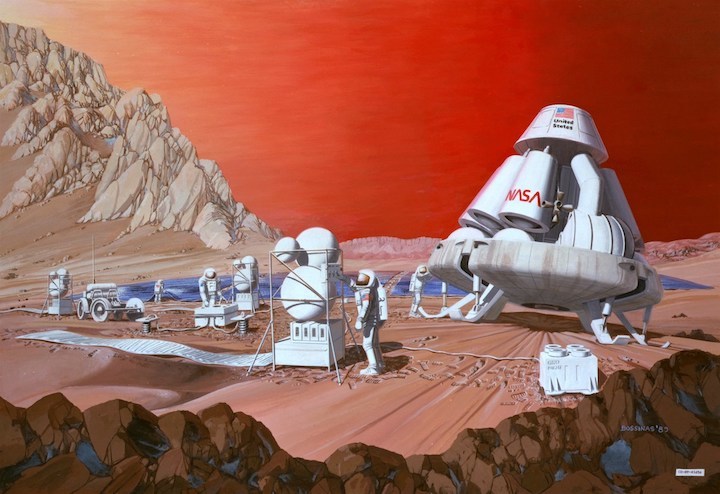 During Scott Kelly’s year in space, the astronaut was zapped relentlessly by radiation — the equivalent of 10 chest X-rays a day for more than 11 months starting in March of 2015. The onslaught damaged Kelly’s DNA and affected his immune system while raising his risk for cancer. And Kelly was aboard the International Space Station, whose tight orbit around Earth lies within the magnetic field that surrounds our planet and blocks the most damaging forms of radiation.

Astronauts who travel to Mars or other destinations in deep space will leave Earth’s protective cocoon for months or years at a time. And a new NASA-funded study suggests that chronic exposure to radiation could harm astronauts’ minds as well as their bodies — potentially affecting space flyers’ moods and even their ability to think.

That could be a big deal.

“The nature of the radiation environment in space will not deter our efforts to travel to Mars, but it may be the single biggest obstacle humankind must resolve to travel beyond the Earth’s orbit,” the researchers wrote in the conclusion to their study, which was published Aug. 5 in the journal ENeuro.

Dr. Munjal Acharya, a radiation oncologist at the University of California, Irvine, and the study's lead author, said radiation exposure "affects cognitive function and behavior at the cellular level,” adding that the exposure might make it hard for astronauts to respond effectively to unforeseen circumstances or stressful situations.

The research suggests that at least one in five astronauts sent to Mars would return with severe deficits in cognitive function, he said.

For the study — the first to simulate the radiation astronauts would be subjected to on a mission to Mars — Acharya and his collaborators exposed 40 mice to radiation for six months and then tested the animals’ memory and behavior.

“That fear was so strong in them that they were still freezing” in anticipation of an electric jolt that the researchers had stopped delivering, Acharya said, adding that the radiation seemed to make it hard for the mice to learn and adapt by weakening connections between different regions of the animals’ brains.

J.D. Polk, NASA’s chief health and medical officer, called the new research an important contribution to the understanding of the potential risk to astronauts posed by radiation. But he cautioned against undue alarm, saying the animals in the study had been exposed to higher levels of radiation than astronauts would likely experience in space.

“With dosages that we are expecting with a Mars mission, I'm not expecting to have a massive amount of cognitive decline in astronauts,” Polk, who is based at the space agency's headquarters in Washington, said. “Is there a high risk that they're going to come back with horrible cognitive decline and forget how to push the red button for reentry? No.”

But Charles Limoli, a radiation oncologist who heads up the NASA Specialized Center of Research at the University of California, Irvine and a co-author of the new study, disputed that assessment. “I'm not sure what literature Dr. Polk is reading, but I don't agree with the context he places our work in — and I don't agree with his statements," he said in an email.

In any case, NASA is already working to limit astronauts' exposure on upcoming missions.

The agency is now testing a radiation-shielding vest designed to limit astronauts' radiation exposure. And its new Orion spacecraft will be equipped with a radiation-sensing instrument that will alert astronauts to a spike in radiation — so the crew can move to the middle of the craft and shield themselves with bags of supplies.

Orion will be used primarily for missions to the moon but might also be used to ferry astronauts to a moon-orbiting spaceport, from where the space flyers might travel to Mars aboard a larger craft known as the Deep Space Transport. Scientists at the agency's Langley Research Center in Hampton, Virginia, are now working to develop protective measures that could be used on the latter craft.

Because hydrogen absorbs radiation, the scientists are investigating ways to integrate hydrogen-rich materials into the spacecraft's structure. One possibility under consideration is to line the walls with water tanks. Another is to add shielding made of polyethylene — the same lightweight plastic used to make water bottles.

The downside of adding water or plastic to the Deep Space Transport is that doing so would make the spacecraft considerably heavier, Polk said. So the scientists are also exploring other solutions, such as giving the craft its own radiation-blocking electromagnetic field — a complicated and potentially costly technology that Polk likened to the deflector shields familiar to viewers of "Star Trek."

Given the cost and weight considerations of radiation shielding, NASA is eager to know just how much shielding will be required to protect astronauts. Polk said future research, including additional studies on animals, could help NASA make that determination. Acharya said his team would conduct new studies to determine the precise mechanisms driving cognitive decline, with a goal of helping to find ways to block it.