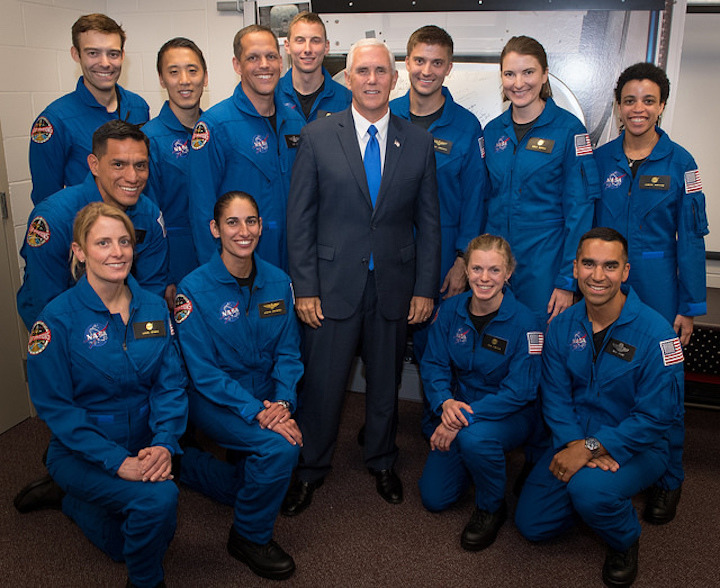 NASA Administrator Jim Bridenstine told a group of college students today that he would not be surprised if an all-female crew lands on the Moon in the next 5 years. The White House has directed NASA to land “the next man and the first woman” on the Moon’s South Pole by 2024 — the Artemis program.  Many assumed that meant the first crew would be co-ed, but Bridenstine said today it is very possible “the next two people on the Moon will both be women.”

Bridenstine was at the University of Colorado Boulder for the opening of its new Aerospace Engineering Complex and engaged in a question-and-answer session with students.

A female aerospace engineering junior asked if NASA had considered an all-female Artemis crew.  Bridenstine enthusiastically said yes and he would not be surprised if that is what happens.

“Have we considered it?  Yes!  In fact it wouldn’t surprise me if that’s what we did.

We have not picked the crew. What I’ve been told is that the next man and the first woman on the Moon will happen within 5 years and they will be Americans.  So that’s what we’re doing. … Yes, we can have a crew of two women going to the surface of Moon within five years. … We have a very diverse, highly qualified astronaut corps and some of our best astronauts are, in fact, women. …

We’re going to pick the absolute best and it’s very possible the first two, the next two people on the Moon will both be women and that’ll happen in the next five years.”

He also told the students that although the first women to go to the Moon are already in the astronaut corps, “there will be a lot more missions to come.”

Bridenstine added that a lot of work needs to be done on learning about how the radiation environment in space affects women differently from men. “We have not been good at that in the past.”

NASA is working diligently to meet the White House’s deadline to return American astronauts to the Moon in just 5 years, a goal with both technical and budgetary challenges.  A detailed plan has not been released, but Bridenstine told a congressional committee last month that NASA hopes to launch Artemis-1, a test flight without a crew, in 2021; Artemis-2, a flight around the Moon with a crew, in “2022/2023”; and Artemis-3, the first crew to land on the Moon, in 2024.

Crews will be launched by the Space Launch System aboard Orion spacecraft to a small space station, Gateway, orbiting the Moon.  Orion can accommodate four astronauts, but NASA has not said how many will be on the early flights.

At the Gateway, the astronauts will transfer to landers that will take them down to and back from the surface.  The landers have not been designed yet.  NASA plans to procure them through public-private partnerships where companies will choose a design to meet NASA’s requirements and build them.  NASA will purchase services from the companies, not own the vehicles.

Notionally, however, the landers will accommodate two astronauts.  Vice President Pence’s direction to NASA on March 26 to put “the next man and the first woman” on the Moon by 2024 suggested the first set would be co-ed, but some have questioned why NASA is not focused on the best people for the job regardless of gender, leading to the question of whether both might be women.

NASA’s 38-member astronaut corps currently includes 12 women, some with extensive flight experience and others awaiting their first flight.  NASA selected a new group of astronauts in 2017 who are classified as astronaut candidates.  Eleven are currently in training (a 12th resigned), of which five are women.