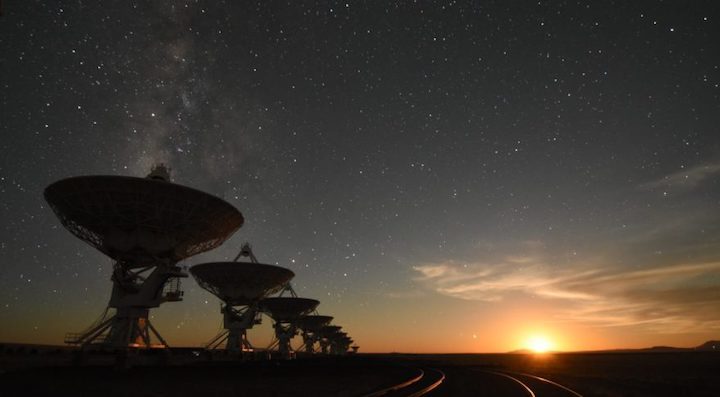 Radio astronomers say OneWeb has not, until recently, paid attention to their concerns about interference, but that it is not too late to avoid a spectrum conflict.

OneWeb has resumed conversations about potential interference from its planned megaconstellation after talks stalled out three years ago, according to the National Radio Astronomy Observatory (NRAO), which operates radio telescopes in the United States and its territories.

The observatory raised the issue with the U.S. Federal Communications Commission, saying OneWeb shouldn’t be talking about starting operations because the company had not met a commission rule that it first coordinate spectrum it wants to use that is adjacent to where astronomers do research.

“The particular issue with OneWeb and their current plan is they need an operating agreement which they didn’t seek,” Tony Beasley, director of NRAO, told SpaceNews in an interview.

FCC regulations require OneWeb and other Ku-band constellations to first coordinate with the observatory before beginning service in the U.S., Beasley said. NRAO is seeking to protect telescopes that take observations in the 10.6 to 10.7 gigahertz band, which includes the Very Large Array telescope in New Mexico, the Very Long Baseline Array, which has 10 sites across the U.S., and the Green Bank Telescope in West Virginia that is operated by a sister institution.

OneWeb’s resumption of dialog appears related to a letter the NRAO sent to the FCC Aug. 2, Beasley said. OneWeb spokespersons Katie Dowd and Christopher Torres did not respond to an Aug. 21 request for comment about the company’s lapse in discussions with the observatory.

In December, OneWeb plans to begin monthly Soyuz launches to deploy an initial constellation of 650 broadband satellites by the end of 2021. The company inaugurated its Florida factory in July where it plans to build the constellation through a joint venture with European manufacturer Airbus Defence and Space.

Beasley said that while OneWeb’s constellation is already underway, the observatory does not consider it too late to avoid interference between the constellation’s broadband services and radio astronomy research.

“It’s not like if they launch it and if it doesn’t meet muster the problem is there forever,” he said. “They can certainly operate in a way to minimize their impact to us, and they are obliged to do that. It would be better if it had happened previously, but it’s not too late to have a discussion about design changes to their system that would minimize the impact to radio astronomy.”

OneWeb is not the only megaconstellation venture to have caused alarm among astronomers. Operators of optical telescopes voiced concern about SpaceX’s Starlink satellites because of their brightness in the night sky after SpaceX launched 60 of them in May.

SpaceX, which plans to launch up to 12,000 satellites, said it was looking into albedo reduction for future satellites so they reflect less sunlight.

SpaceX, OneWeb, and Canadian startup Kepler Communications all plan to use Ku-band spectrum for their constellations.

Beasley said that SpaceX, while a concern to optical astronomers, has not been a source of worry for radio astronomers.

“SpaceX set an excellent example on being responsible and trying to listen and deal with the issues that have come up,” said Beasley. “Full marks to them.”

The NRAO and SpaceX reached an agreement on spectrum earlier this year, Beasley said. Discussions are now continuing with OneWeb for the first time since 2016, he said. Topics include the design of OneWeb’s satellites, where OneWeb plans to put ground stations with respect to radio astronomy observatories, and the overall impact of the constellation on radio astronomy, he said.

Kepler spokesperson Victoria Alberto declined to comment on the company’s coordination efforts with radio astronomers. Kepler has two prototypes in orbit for a Ku-band constellation of up to 140 satellites.