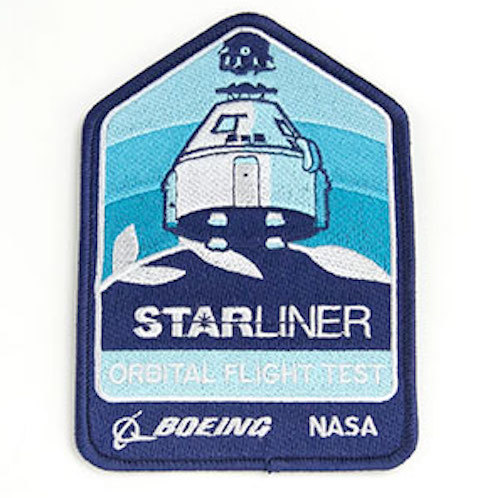 The first astronauts set to launch on Boeing's new Starliner spacecraft now have a mission patch to represent their flight.

Chris Ferguson, Boeing's first commercial astronaut, recently shared with his team the emblem that he and his two crewmates will wear for the Starliner's Crew Flight Test (CFT). Ferguson also revealed the insignia for the test flights that will precede the CFT launch.

Boeing provided collectSPACE with images and excerpts from Ferguson's email.

"Nicole, Mike, Eric Boe and I worked with Starliner employees from across the country to develop a patch that pays homage to the national importance of the Starliner program," wrote Ferguson, referencing his crewmates, NASA astronauts Nicole Mann and Mike Fincke, as well as Boe, who Fincke replaced on the CFT crew due to unspecified medical reasons.

"Our strong partnership with the U.S. space agency is seen through the patch's red, white and blue color palette. The red vector coming off the sides of the spacecraft represents NASA's insignia, known as the 'meatball,' as a symbol of our collaboration," wrote Ferguson, who as a prior NASA astronaut flew on three missions, including leading the final flight of the space shuttle program in 2011.

The Starliner is shown on the patch rising above a blue Earth. A yellow sunburst that follows the curvature of the planet represents the "dawn of a new era in human spaceflight with the first orbital flight of a crewed commercial spacecraft."

The crew's names, "NASA," the Boeing logo and the emblem's other design elements are set against a dark blue background, symbolizing low Earth orbit and "the iconic Boeing blue hue," Ferguson described.

Before the CFT mission can fly, Boeing will conduct the Pad Abort Test and OFT to confirm that Starliner is ready and safe to launch with astronauts on board.

The Pad Abort Test patch depicts the Starliner firing its four launch abort engines, which will fly the spacecraft's crew module away from danger while on the launch pad or through the vehicle's ascent into orbit. The Pad Abort Test, which will simulate the earlier, will be staged at the White Sands Missile Range this fall.

"Drawing inspiration from the scenic New Mexico desert where the test will take place, the varying colors of orange represent the steps we took to qualify the Starliner's abort system, beginning at the component level and graduating to an integrated test level," wrote Ferguson, who also serves as Boeing's director of crew and mission systems. "The sun represents the rise of a new age in human spaceflight that puts safety of crew members at the forefront of all we do."

The OFT mission will put Starliner though the same flight profile as the follow-on CFT — from launching atop a United Launch Alliance (ULA) Atlas V rocket in Cape Canaveral, Florida to touching down under a parachute and on airbags in the western United States.

"With shades of blue representing our methodical steps to reach low Earth orbit, this patch was ultimately inspired by the image of Starliner first docking to the Boeing-built International Docking Adaptor attached to the International Space Station," Ferguson explained.

"Over the past half-century, Boeing has played an integral role in every U.S. human spaceflight program. The olive branch on this patch nods to that history as a reference to the Apollo 11 moon landing patch, and to NASA as the agency welcomes Boeing to the era of commercial human spaceflight services," Ferguson wrote to the Starliner team.

For now, the Pad Abort Test and CFT insignia exist only as artwork. Boeing has produced the OFT emblem as an embroidered cloth patch, which is now available to employees and the public through the company's online and physical stores.

While there will be no astronauts aboard the OFT mission, an instrumented flight test dummy may wear the OFT patch sewn to its Boeing Starliner pressure suit.