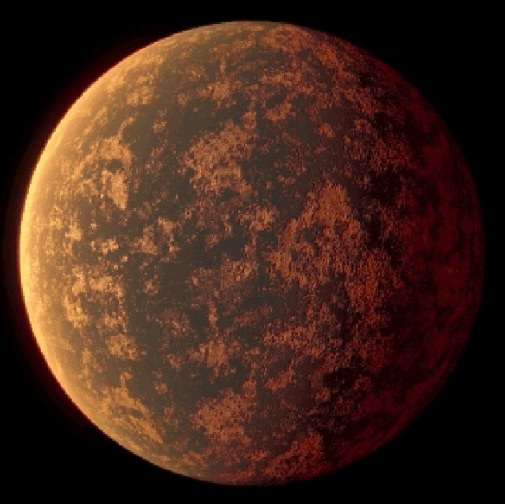 Astronomer Laura Kreidberg admits she was initially a bit worried about her latest results. Examinations of a planet orbiting the red dwarf star LHS 3844 seemed to indicate that the rocky super-Earth, 30 percent larger than our world, possessed little or no atmosphere.

Kreidberg’s concern stemmed from the fact that researchers are in the midst of a heated debate about the habitability of planets around red dwarfs, which make up 70 percent of the stars in our galaxy. A universe teeming with life is more likely if the worlds orbiting these diminutive entities, which are smaller and cooler than our sun, could be a good abode for biology.

But red dwarfs are harsh hosts, emitting frequent flares containing x-rays and ultraviolet radiation that could sterilize a planet, as well as energetic stellar winds that can strip it of its protective atmosphere. Kreidberg and her colleagues’ findings, appearing today in Nature,could be seen as a mark against the idea that planets around small red stars could provide a nurturing environment.

In recent years, astronomers have announced numerous exciting discoveries regarding red dwarfs, such as Proxima Centauri b, a potentially habitable planet orbiting our sun’s nearest star, and the TRAPPIST-1 system, which contains a whopping seven Earth-sized worlds. Red dwarfs are not only abundant but are also the longest-living stars, with a lifetime that can span 10 trillion years—1,000-fold longer than that of our sun. Should a biosphere arise on a red dwarf world, it might stick around for an exceptionally long time.

Astronomers are therefore interested to know whether or not red dwarfs’ planets are good places to go looking for living creatures. “To have life as we know it, you need to have liquid water,” says Abraham Loeb, a co-author of the Nature study and an astrophysicist at the Center for Astrophysics at Harvard University and the Smithsonian Institution (CfA). “In order to have liquid water, you need an atmosphere.”

Kreidberg, who is also at the CfA, has been in the daily habit of checking for new results from NASA’s Transiting Exoplanet Survey Satellite (TESS), a space-based observatory hunting for nearby planets that “transit” their host stars—flitting across the faces of those stellar hosts and casting shadows toward our solar system. Among TESS’s first discoveries was the rocky world LHS 3844 b, located just under 49 light-years away, and Kreidberg quickly recognized that it was in an ideal position to test the atmospheric-retention capabilities of red dwarf exoplanets.

LHS 3844 b orbits incredibly close to its parent star, zipping around in a mere 11 hours. This orbit more or less guarantees that the star’s gravitational pull has tidally locked the planet, meaning one side of the world always faces the star. The exoplanet’s dayside is scorching, while its space-facing hemisphere sits out in the cold.

But while the exoplanet experiences 70 times more radiation than Earth, Kreidberg says it would not necessarily lose its atmosphere at this distance. For instance, an envelope of thick carbon dioxide could be heavy enough to endure the bombardment from the nearby star. Or the world might have once contained a vast ocean that was boiled off by the intense starlight, which also would have split the water into its constituent molecules. The lighter hydrogen could have drifted away, leaving an atmosphere of pure oxygen.

Although the researchers could not directly see the planet, using NASA’s infrared Spitzer Space Telescope, they were able effectively take its temperature, detecting a periodic variation in the thermal emissions from its host star that was caused by the planet’s orbital movements. Much like the moon in our sky, LHS 3844 b shows different faces to observers on Earth as it sweeps through its orbit: at turns, it displays its hotter dayside or its colder nightside, which subtly alters the amount of infrared radiation astronomers see emanating from the star. The planet also passes completely behind its star for a portion of its orbit, as seen from Earth, entirely removing its heat from view and allowing scientists to determine its total contribution to the star’s thermal emissions. Based on these measurements, Kreidberg’s team estimated the temperature of the planet’s nightside as a freezing –273 degrees Celsius and that of its days as a fiery 767 degrees C.

The presence of a regulating atmosphere should allow heat to transfer between hemispheres, reducing such extremes. But computer models suggested that LHS 3844 b’s temperature differences could only arise and persist if the planet had an extremely thin atmosphere, with, at most, a 10th of the pressure of Earth’s and likely none at all.

A great deal of theoretical work has already implied that worlds orbiting red dwarfs would have a hard time forming or retaining significant atmospheres because of the extreme environment, says Colin Johnstone, an astrophysicist at the University of Vienna, who was not involved in the new study. But what the characteristics of a close-in planet such as LHS 3844 b means for places such as TRAPPIST-1’s worlds or Proxima Centauri b, which orbit farther from their parent star, is not entirely clear.

“It’s one more piece of evidence suggesting that these stars aren’t going to have habitable planets,” Johnstone says, though he cautions against making sweeping judgments based on a single example.

Because LHS 3844 b is far inside the traditional habitable zone—a region around a star where a planet is sufficiently warmed by starlight to have liquid water on its surface—the null result does not much phase Tiffany Jansen, an astronomy Ph.D. candidate at Columbia University, who also was not involved in the recent work.

“The discovery of a lack of an atmosphere on this planet doesn’t make it any less likely that planets in the habitable zone would have an atmosphere,” she says.

But Loeb counters that what happens in the immediate vicinity of a red dwarf star is relevant to more remote planets. He has previously done theoretical calculations suggesting that red dwarfs are prone to blow away the atmospheres of exoplanets in their habitable zone. Even though LHS 3844 b is a single example and is much closer to its star than a habitable planet could be, it provides important evidence that atmospheric stripping takes place. And extrapolations imply similar outcomes can be expected farther out, Loeb says.

The discussion will probablyrage on until astronomers can examine more cases. The upcoming James Webb Space Telescope (JWST), an infrared observatory whose mirror will have 6.25 times the light-collecting power of the Hubble Space Telescope, will be revolutionary in its ability to measure heat from distant exoplanets, Kreidberg says.

Other teams have already committed to using time during JWST’s first year to examine the temperature of the planets TRAPPIST-1 b—found in the TRAPPIST-1 system—and Gliese 1132 b—which also orbits a red dwarf. The telescope is currently scheduled to launch in 2021, and it will be joined by powerful 30-meter-class ground-based observatories, expected to come online early next decade, that can conduct similar research.

Kreidberg’s preliminary disappointment about LHS 3844 b eventually dissipated. “If you were an alien looking at our solar system and saw Mercury, you’d be a little discouraged,” she says, but our cosmic backyard contains a wide diversity of atmospheres.

Researchers are still coming to understand just how planetary atmospheres arise, and a great deal remains unknown. “For every idea for how to get rid of an atmosphere on a planet, there’s another for how to keep it or make a new one,” Kreidberg says. “I don’t think this counts as a victory point for the naysayers just yet.”