As companies look to asteroids, the moon and mars for new sources of mineral wealth, two scientists have suggested a potential model for sustainable space mining to protect the ‘space wilderness.’ 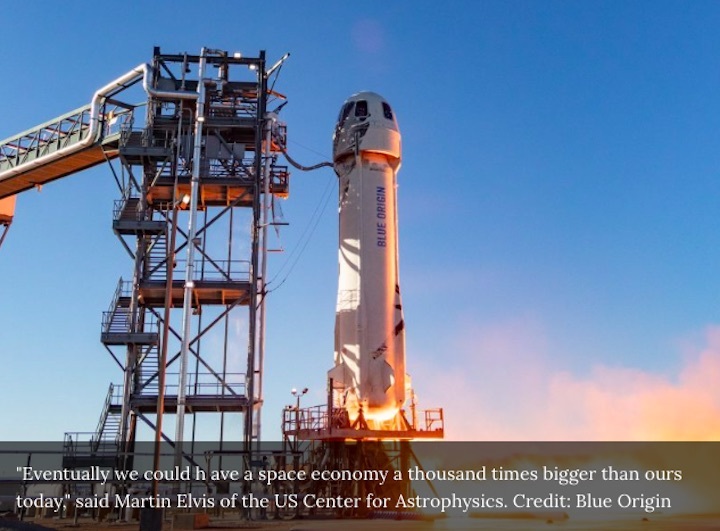 The mineral resources in space are thought to be a million or more times greater than those on earth. And while mining in the solar system might sound futuristic, at the current rate of investment in commercial space exploration, it could be a reality in a few decades.

“In the next few years or so there will be half a dozen private companies trying to land on the moon – several who say they plan to mine there,” says Martin Elvis, a senior astrophysicist at the Center for Astrophysics, Harvard & Smithsonian in the US.

“This means eventually we could have a space economy a thousand times bigger than ours today,” he adds.

Amazon founder and space exploration company Blue Origin owner Jeff Bezos recently described his vision of a trillion people in space, living not on moons or planets, but on ‘bucolic space colonies’.  Bezos has said space exploration and mineral extraction will be needed to avoid the exhaustion of resources on earth – and he is just one of several tech billionaires investing heavily in this vision of the future.

However, as these companies plot their route into space, Elvis and his colleague Tony Milligan, a philosopher from King’s College London, say others should be thinking about the wider impacts of space mining based on lessons learned here on earth.

In their recent paper, entitled ‘How much of the Solar System should we leave as Wilderness?’ Elvis and Milligan suggest creating a policy that limits future space mineral extraction to avoid eventual super-exhaustion.

“The lessons from earth are to realise that seemingly inexhaustible resources are in fact finite,” says Milligan.

“Although we begin like the people at the end of 1700s and early1800s looking at vast areas of unused regions thinking we will never exhaust the reserves or encounter any problems, we know that, actually, issues of exhaustion tend to occur much quicker than people imagine,” he adds.

They calculate at a 3.5% growth rate, which is comparable to the use of iron from the beginning of the Industrial Revolution until now, 1/8th of space resources could be exploited in around 400 years.

At that point, the 20-year doubling time – the period of time required for a quantity to double in size or value – associated with a 3.5% growth rate means there would be only 60 years remaining to transition the economic system to new ‘steady state’ conditions.

And with roboticisation, minerals could be exploited in space exponentially faster, says Elvis.

“Roboticisation may increase the growth rate to around 10% – this is how fast China has roughly grown during the last generation – which means we would then hit the 1/8th limit in roughly 150 years, which would potentially affect people’s great grand kids,” he explains.

Milligan and Elvis calculate that transitioning to a ‘new, dynamic economy’, which will be needed to avoid super-exhaustion once 1/8 of reserves are exploited, will take around half a century.

“Once you reach super exploitation there probably isn’t anything else, except perhaps bringing in resources outside of the solar system which is a big ask,” says Milligan.

But why should anyone be thinking about this now, when reaching the point of super exhaustion is potentially centuries away?

“Because often, when it comes to decision making about processes of expansion that requires a large-scale structure of the economy to work, humans make these decisions very late in the day – the obvious example being the earth and problems of global warming – we were late to realise the extent of these problems,” explains Milligan. “We don’t want to suddenly realise that exponential growth is getting out of hand at a point when it is too difficult to tackle.”

Therefore, setting an early limit on extraction is not ‘anti-growth’ but simply saying: “let’s not make the same mistakes as here on earth,” according to both.

Exploiting mars and the moon

Furthermore, Elvis and Milligan stress that, currently, not all of the solar system is easily accessible to humans. Therefore, exploration in space will likely concentrate on a relatively small area, such as the asteroid belt and mars.

“Few load bearing asteroids come near to the earth, so to sustain exploration we need to think about going to the asteroid belt with a base on mars,” says Milligan.

But while Mars is a large part of the accessible planetary territory available for mineral extraction, it shouldn’t be considered in isolation but in the context of other space resources distributed around the solar system.

Legislators need to be cognizant to the fact that there won’t be enough space mining territory for everyone and this should be taken into consideration when setting mineral extraction limits, says Milligan.

“This could lead to potential conflicts about who is going to do what quite early on – it will be hard to fit into a diplomatic framework, space being a land that is not owned by anyone is a big issue in space law, but it must be addressed,” he adds.

Some countries, including America and Luxemburg are already developing space mining legislation.  However, it’s hoped any future rules and regulations will be set and agreed on at an international level; but as history shows – and especially in today’s increasingly nationalistic environment – creating international treaties is extremely difficult. The last time one was created for space was in the 1960s.

Now rather than later

Nevertheless, despite the difficulties, both Milligan and Elvis suggest it is better to embark on international co-operation and diplomacy on future space mining law now while the so-called ‘veil of ignorance’ still exists. Essentially, this means that while space mining is somewhat still a mystery, there is less chance international treaties will be hampered by self-interested parties unwilling to compromise.

“The reason the space treaty worked before was because no one knew what was going to happen, so people wanted to make sure whatever did happen they weren’t disadvantaged in the future,” says Milligan.

“Today there is a clear vested interest in potential players reaching agreements or establishing a loose set of norms; but once that veil of ignorance comes down, it becomes very difficult to counteract vested interests –  it won’t be easy, but this is just the beginning of a long discussion.”

Raumfahrt - Should we be protecting the ‘space wilderness’ from mining?
1478 Views
Created with page4