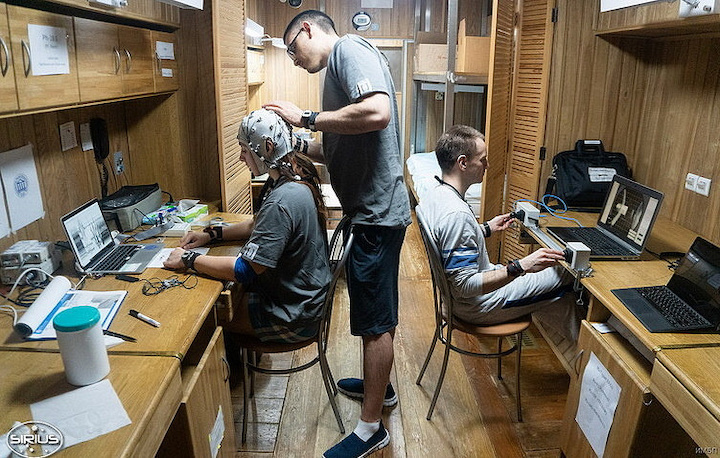 Six members of the SIRIUS international crew have left the ground-based experimental compound of the Russian Academy of Sciences’ Institute of Biomedical Problems after completing their four-month isolation experiment simulating a flight to the Moon.

The crew led by Captain Yevgeny Tarelkin was greeted by the heads of the experiment, representatives of Russia’s State Space Corporation Roscosmos, Energia Space Rocket Corporation, the Cosmonaut Training Center and NASA, and also by relatives and journalists.

The crew remained in isolation from March 19. The experiment’s scenario simulated a flight to the Moon and the landing on its surface.

"The SIRIUS international crew accomplished the assigned mission in full," the crew commander reported to Director of the Institute of Biomedical Problems Oleg Orlov.

"This experiment is to serve as a pillar in organizing long-term flights. The current experiment will help us prepare future missions to the Moon in a planned manner and minimize risks," Roscosmos Deputy Head Sergei Savelyev said at the ceremony of welcoming the experiment’s crew.

The SIRIUS (Scientific International Research in Unique Terrestrial Station) experiment is intended to simulate a flight to the Moon — the travel to the Earth’s natural satellite and a flight around it in search of a landing place, the landing of the crew for operations on the surface, the stay in the Moon’s orbit and the remote control of a lunar rover to prepare a base and return to Earth.

The experiment is being held by the Institute of Biomedical Problems of the Russian Academy of Sciences jointly with NASA and in cooperation with partners from Germany, France, Italy and other countries. It envisages a series of experiments to gear up for deep space flights.

Before the start of the four-month experiment, a special commission approved the experiment’s crew composition — four representatives of Russia (cosmonaut Yevgeny Tarelkin as the commander, Daria Zhidova as the flight engineer, Stefania Fedyai as the doctor and Anastasia Stepanova) and two representatives of the United States (Reinhold Povilaitis and Allen Mirkadyrov as test researchers).

The first of the series of joint Russian-US SIRIUS experiments was held in November 2017 and lasted 17 days. The crew was tasked to conduct over 60 various experiments, ‘capture’ satellites by a manipulator arm and control a rover on the Moon’s surface. Now the four-month isolation experiment has come to an end, after which it will be followed by an eight-month trial that will give way to a twelve-month research.