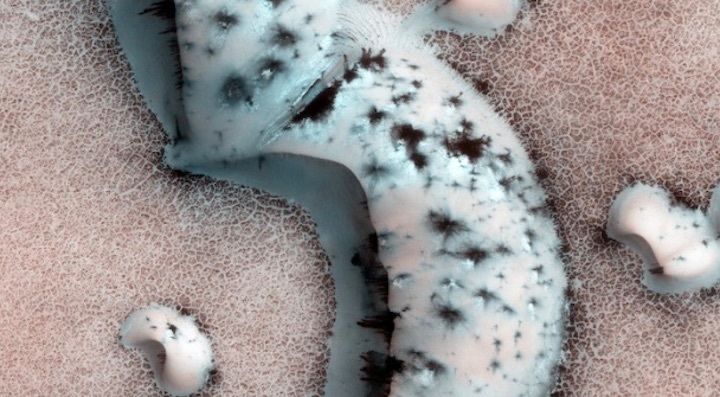 Polar ice caps on Mars are a combination of water ice and frozen CO2. Like its gaseous form, frozen CO2 allows sunlight to penetrate while trapping heat. In the summer, this solid-state greenhouse effect creates pockets of warming under the ice, seen here as black dots in the ice.

People have long dreamed of re-shaping the Martian climate to make it livable for humans. Carl Sagan was the first outside of the realm of science fiction to propose terraforming. In a 1971 paper, Sagan suggested that vaporizing the northern polar ice caps would “yield ~10 s g cm-2 of atmosphere over the planet, higher global temperatures through the greenhouse effect, and a greatly increased likelihood of liquid water.”

Sagan’s work inspired other researchers and futurists to take seriously the idea of terraforming. The key question was: are there enough greenhouse gases and water on Mars to increase its atmospheric pressure to Earth-like levels?

In 2018, a pair of NASA-funded researchers from the University of Colorado, Boulder and Northern Arizona University found that processing all the sources available on Mars would only increase atmospheric pressure to about 7 percent that of Earth – far short of what is needed to make the planet habitable.

Terraforming Mars, it seemed, was an unfulfillable dream.

Now, researchers from the Harvard University, NASA’s Jet Propulsion Lab, and the University of Edinburgh, have a new idea. Rather than trying to change the whole planet, what if you took a more regional approach?

The researchers suggest that regions of the Martian surface could be made habitable with a material — silica aerogel — that mimics Earth’s atmospheric greenhouse effect. Through modeling and experiments, the researchers show that a two to three-centimeter-thick shield of silica aerogel could transmit enough visible light for photosynthesis, block hazardous ultraviolet radiation, and raise temperatures underneath permanently above the melting point of water, all without the need for any internal heat source.

The paper is published in Nature Astronomy.

“Unlike the previous ideas to make Mars habitable, this is something that can be developed and tested systematically with materials and technology we already have.”Tweet This

“This regional approach to making Mars habitable is much more achievable than global atmospheric modification,” said Robin Wordsworth, Assistant Professor of Environmental Science and Engineering at the Harvard John A. Paulson School of Engineering and Applied Sciences (SEAS) and the Department of Earth and Planetary Science. “Unlike the previous ideas to make Mars habitable, this is something that can be developed and tested systematically with materials and technology we already have.”

“Mars is the most habitable planet in our Solar System besides Earth,” said Laura Kerber, Research Scientist at NASA’s Jet Propulsion Laboratory. “But it remains a hostile world for many kinds of life. A system for creating small islands of habitability would allow us to transform Mars in a controlled and scalable way.”

The researchers were inspired by a phenomenon that already occurs on Mars.

Unlike Earth’s polar ice caps, which are made of frozen water, polar ice caps on Mars are a combination of water ice and frozen CO2. Like its gaseous form, frozen CO2 allows sunlight to penetrate while trapping heat. In the summer, this solid-state greenhouse effect creates pockets of warming under the ice.

The researchers landed on silica aerogel, one of the most insulating materials ever created.

Silica aerogels are 97 percent porous, meaning light moves through the material but the interconnecting nanolayers of silicon dioxide infrared radiation and greatly slow the conduction of heat. These aerogels are used in several engineering applications today, including NASA’s Mars Exploration Rovers.

“Silica aerogel is a promising material because its effect is passive,” said Kerber. “It wouldn’t require large amounts of energy or maintenance of moving parts to keep an area warm over long periods of time.”

Using modeling and experiments that mimicked the Martian surface, the researchers demonstrated that a thin layer of this material increased average temperatures of mid-latitudes on Mars to Earth-like temperatures.

“Spread across a large enough area, you wouldn’t need any other technology or physics, you would just need a layer of this stuff on the surface and underneath you would have permanent liquid water,” said Wordsworth.

This material could be used to build habitation domes or even self-contained biospheres on Mars on Mars.

“There’s a whole host of fascinating engineering questions that emerge from this,” said Wordsworth.

Next, the team aims to test the material in Mars-like climates on Earth, such as the dry valleys of Antarctica or Chile.

Wordsworth points out that any discussion about making Mars habitable for humans and Earth life also raises important philosophical and ethical questions about planetary protection.

“If you’re going to enable life on the Martian surface, are you sure that there’s not life there already? If there is, how do we navigate that,” asked Wordsworth. “The moment we decide to commit to having humans on Mars, these questions are inevitable."

Scientists tested these samples of aerogel to see how they could be used as building materials on Mars. In an experimented, both the crushed and solid samples of aerogel were able to raise temperatures to melt water ice - ideal for a Martian greenhouse in which crops could grow. Credit: Robin Wordsworth/Harvard

Raising crops on Mars is far easier in science fiction than it will be in real life: The Red Planet is an inhospitable world. Among other challenges, subzero temperatures mean water can persist on the surface only as ice, and the planet's atmosphere offers little protection to plants (or people) from the Sun's radiation.

Of course, NASA has plans to eventually put humans on Mars, using lessons it will learn from its Artemis lunar explorations. And those humans will need to eat. Being able to produce food on Mars would help reduce the quantity of supplies consuming valuable space and fuel on crewed missions to the Red Planet. But figuring out how - and where - to produce that food, while also being exceedingly careful not to contaminate Mars with Earth-borne bacteria, are some of the challenges scientists and engineers face.

In a new paper in Nature Astronomy, researchers propose that a material called aerogel might help humans one day build greenhouses and other habitats at Mars' mid-latitudes, where near-surface water ice has been identified. The study was funded by Harvard University's Faculty of Arts and Sciences.

Aerogel is a Styrofoam-like solid that is 99% air, making it extremely light. It's adept at preventing the transfer of heat as well, making it an excellent insulator; in fact, it's been used for that purpose on all of NASA's Mars rovers. Moreover, aerogel is translucent, allowing visible light to pass through while blocking ultraviolet light's harmful radiation. Most aerogel is made from silica, the same material found in glass.

In an experiment conducted by lead author Robin Wordsworth of Harvard, 2-3 centimeters of silica aerogel allowed light from a lamp tuned to simulate Martian sunlight to heat the surface beneath it by up to 150 degrees Fahrenheit (65 degrees Celsius) - enough to raise temperatures on the Martian surface and melt water ice.

"The study was meant as an initial test of aerogel's potential as a Martian building material," said second author Laura Kerber, a geologist at NASA's Jet Propulsion Laboratory in Pasadena, California.

Kerber participated in a 2015 NASA workshop to identify the best places on Mars to send astronauts. "The ideal place for a Martian outpost would have plentiful water and moderate temperatures," she said. "Mars is warmer around the equator, but most of the water ice is located at higher latitudes. Building with silica aerogel would allow us to artificially create warm environments where there is already water ice available."

Broadening the regions on Mars where humans could grow things also opens up new areas where they could conduct valuable scientific research, Kerber added.

The aerogel experiment was inspired by the heating process that creates so-called dark spots that dot Mars' carbon dioxide ice caps during the spring. This kind of ice is better known on Earth as dry ice. Like aerogel, carbon dioxide ice is translucent, allowing sunlight to heat the surface below. As the soil warms, carbon dioxide gas accumulates between the ice and the warm surface, eventually causing the ice to rupture. That, in turn, creates a puff of gas that tosses soil beneath the ice onto its surface.

The experiment explored a similar process with aerogel. The paper details how both a solid piece of aerogel as well as chunks of crushed aerogel can be used to heat the surface below. The researchers used varying levels of illumination produced by Martian seasons. The results suggest aerogel could even provide a heating effect in the bitter Martian winter. In the mid-latitudes, winter nighttime temperatures can be as cold as minus 130 degrees Fahrenheit (minus 90 degrees Celsius).

The next step, Wordsworth said, is taking the experiment out of the lab and into Martian analogues like Chile's Atacama Desert or Antarctica's McMurdo Dry Valleys. Like Mars, these environments reach subzero temperatures and are exceptionally dry.

"Our prediction is that aerogel shielding should provide more efficient heating as it scales in size," Wordsworth said. "That would be important to see under field conditions."

Challenges to Be Overcome

While the experiment was an encouraging proof of concept, Wordsworth acknowledged there are still significant engineering challenges to overcome. Based on a climate model produced along with the experiment, it would take lots of aerogel and at least two Mars years (or four Earth years) of warming to produce a permanent region of liquid water underneath. Although aerogel is several times lighter than air, building structures with roofs made out of the material would require shipping large quantities of it to Mars or somehow manufacturing it there.

Silica aerogel is very fragile and porous; layering it within another translucent material, or combining it with flexible materials, could prevent fracturing. Doing so could increase air pressure under a structure made with an aerogel roof or shield as well, allowing liquid water to pool more easily on the surface instead of vaporizing in the thin Martian atmosphere.

But the study's authors noted that developing small habitability zones on Mars is more plausible than attempting to "terraform" the planet, as science-fiction writers have proposed doing in the past. A NASA study last year dashed the hopes of thickening the Martian atmosphere enough to create an Earth-like greenhouse effect.

"Anything that would help make long-term habitability possible is exciting to consider," Wordsworth said.