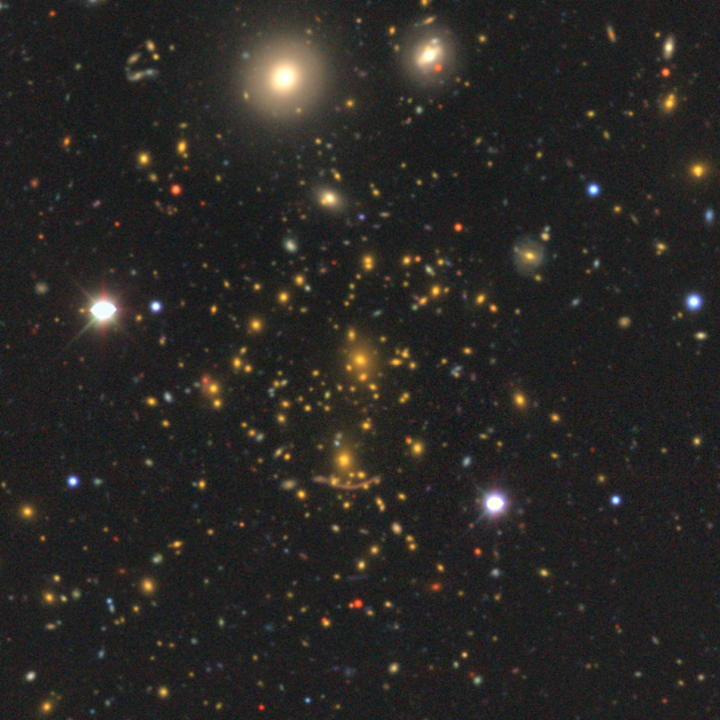 A multicolor mosaic image of the massive galaxy cluster, Abell 370, located in the constellation Cetus – named for a sea monster in Greek mythology. Galaxy clusters are the largest structures in the universe bound by gravity, and consist of thousands of galaxies and large amounts of dark matter. Abell 370 formed when two less massive galaxy clusters merged together billions of years ago. It is more than 6.5 billion light-years away from Earth. The mosaic is approximately 4.5 million light-years across and has been constructed from deep optical imaging in the Legacy Surveys’ eighth data release. (Credit: John Moustakas/Siena College; Legacy Surveys team)

T TOOK THREE SKY SURVEYS – conducted at telescopes in two continents, covering one-third of the visible sky, and requiring almost 1,000 observing nights – to prepare for a new project that will create the largest 3D map of the universe’s galaxies and glean new insights about the universe’s accelerating expansion.

This Dark Energy Spectroscopic Instrument (DESI) project will explore this expansion, driven by a mysterious property known as dark energy, in great detail. It could also make unexpected discoveries during its five-year mission.

The surveys, which wrapped up in March, have amassed images of more than 1 billion galaxies and are essential in selecting celestial objects to target with DESI, now under construction in Arizona.

The latest batch of imaging data from these surveys, known as DR8, was publicly released July 8, and an online Sky Viewer tool provides a virtual tour of this data. A final data release from the DESI imaging surveys is planned later this year.

Scientists will select about 33 million galaxies and 2.4 million quasars from the larger set of objects imaged in the three surveys. Quasars are the brightest objects in the universe and are believed to contain supermassive black holes. DESI will target these selected objects for several measurements after its start, which is expected in February 2020.

DESI will measure each target across a range of different wavelengths of light, known as spectrum, from the selected set of galaxies repeatedly over the course of its mission. These measurements will provide details about their distance and acceleration away from Earth.

A collection of 5,000 swiveling robots, each carrying a fiber-optic cable, will point at sets of pre-selected sky objects to gather their light (see a related video) so it can be split into different colors and analyzed using a series of devices called spectrographs.

“Typically, when you apply for time on a telescope you get up to five nights,” said David Schlegel, a DESI project scientist at the U.S. Department of Energy’s Lawrence Berkeley National Laboratory (Berkeley Lab), which is the lead institution in the DESI collaboration. “These three imaging surveys totaled 980 nights, which is a pretty big number.”

The three imaging surveys for DESI include:

This map shows the sky areas covered (blue) by three surveys conducted in preparation for DESI. (Credit: University of Arizona)

On-site survey crews – typically two DESI project researchers per observing night for each of the surveys – served in a sort of “lifeguard” role, Schlegel said. “When something went wrong they were there to fix it – to keep eyes on the sky,” and researchers working remotely also aided in troubleshooting.

In early March, Eva-Maria Mueller, a postdoctoral researcher at the U.K.’s University of Portsmouth, and Robert Blum, former deputy director at the National Optical Astronomy Observatory (NOAO) that manages the survey sites, were on duty with a small team in the control room of the NSF’s Victor Blanco Telescope on a mile-high Chilean mountain for the final night of DECaLS survey imaging. 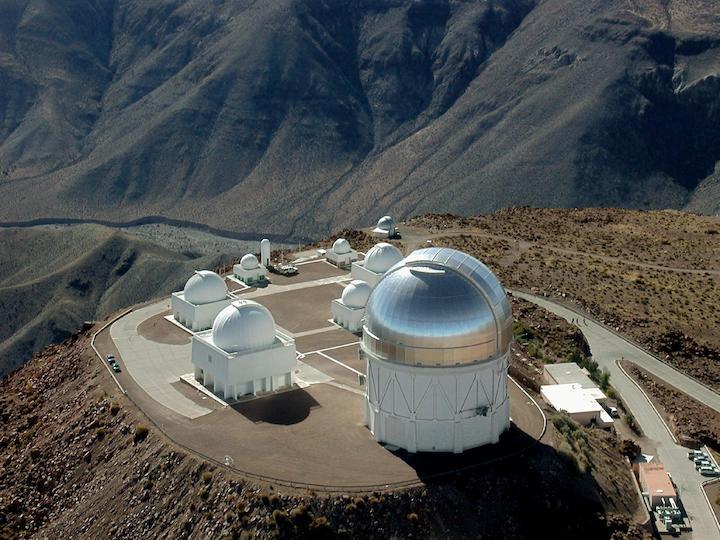 An aerial image of the Cerro Tololo Interamerican Observatory in Chile, with the silvery dome of the 4-meter Blanco telescope pictured at lower right. (Credit: NOAO/AURA/NSF)

Seated several stories beneath the telescope, Mueller and Blum viewed images in real time to verify the telescope’s position and focus. Mueller, who was participating in a five-night shift that was her first observing stint for the DESI surveys, said, “This was always kind of a childhood dream.”

Blum, who had logged many evenings at the Blanco telescope for DECaLS, said, “It’s really exciting to think about finishing this phase.” He noted that this final night was focused on “cleaning up little holes” in the previous imaging. Blum is now serving in a new role as acting operations director for the Large Synoptic Survey Telescope under installation in Chile.

New software designed for the DESI surveys, and precise positioning equipment on the telescopes, has helped to automate the image-taking process, setting the exposure time and filters and compensating for atmospheric distortions and other factors that can affect the imaging quality, Blum noted. During a productive evening, it was common to produce about 150 to 200 images for the DECaLS survey.

The data from the surveys was routed to supercomputers at Berkeley Lab’s National Energy Research Scientific Computing Center (NERSC), which will be the major storehouse for DESI data.

“We are building a detailed map of the universe and measuring its expansion history over the last 10 to 12 billion years,” Dey said. “The DESI experiment represents the most detailed – and definitely the coolest – cosmic cartography experiment undertaken to date. Although the imaging was carried out for the DESI project, the data are publicly available so everyone can enjoy the sky and explore the cosmos.”

Xiaohui Fan, a University of Arizona astronomy professor who was a co-lead on the BASS survey conducted at Kitt Peak’s Bok Telescope, coordinated viewing time by an international group that included co-leads Professor Zhou Xu and Associate Professor Zou Hu, other scientists from the National Astronomical Observatories of China (NAOC), and researchers from the University of Arizona and from across the DESI collaboration. 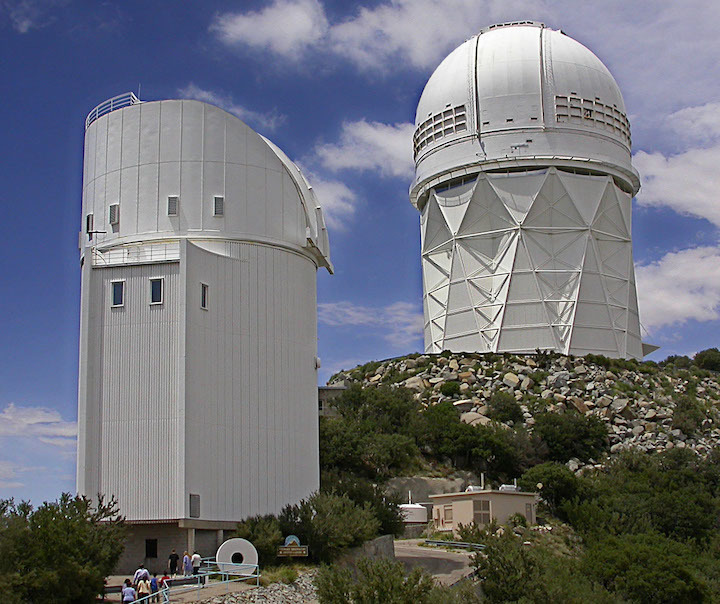 The Bok (left) and Mayall telescopes at Kitt Peak National Observatory near Tucson, Arizona. DESI is currently under installation at the Mayall telescope. (Credit: Michael A. Stecker)

BASS produced about 100,000 images during its four-year run. It scanned a section of sky about 13 times larger than the Big Dipper, part of the Ursa Major constellation.

“This is a good example of how a collaboration is done,” Fan said. “Through this international partnership we were bringing in people from around the world. This is a nice preview of what observing with DESI will be like.”

Fan noted the DESI team’s swift response in updating the telescope’s hardware and software during the course of the survey.

“It improved a lot in terms of automated controls and focusing and data reduction,” he said. Most of the BASS survey imaging concluded in February, with some final images taken in March.

Next steps toward DESI’s completion

All of the images gathered will be processed by a mathematical code, called Tractor, that helps to identify all of the galaxies surveyed and measure their brightness.

With the initial testing of the massive corrector barrel, which houses DESI’s package of six large mirrors, in early April, the next major milestone for the project will be the delivery, installation, and testing of its focal plane, which caps the telescope and houses the robotic positioners.

Dey, who participated in formative discussions about the need for an experiment like DESI almost 20 years ago, said, “It’s pretty amazing that our small and dedicated team was able to pull off such a large survey in such a short time. We are excited to be turning to the next phase of this project!”

Quelle: A U.S. Department of Energy National Laboratory Managed by the University of California