Imagine slow-motion fireworks that started exploding 170 years ago and are still continuing. This type of firework is not launched into Earth's atmosphere, but rather into space by a doomed super-massive star, called Eta Carinae, the largest member of a double-star system. A new view from NASA's Hubble Space Telescope, which includes ultraviolet light, shows the star's hot, expanding gases glowing in red, white and blue. Eta Carinae resides 7,500 light-years away. 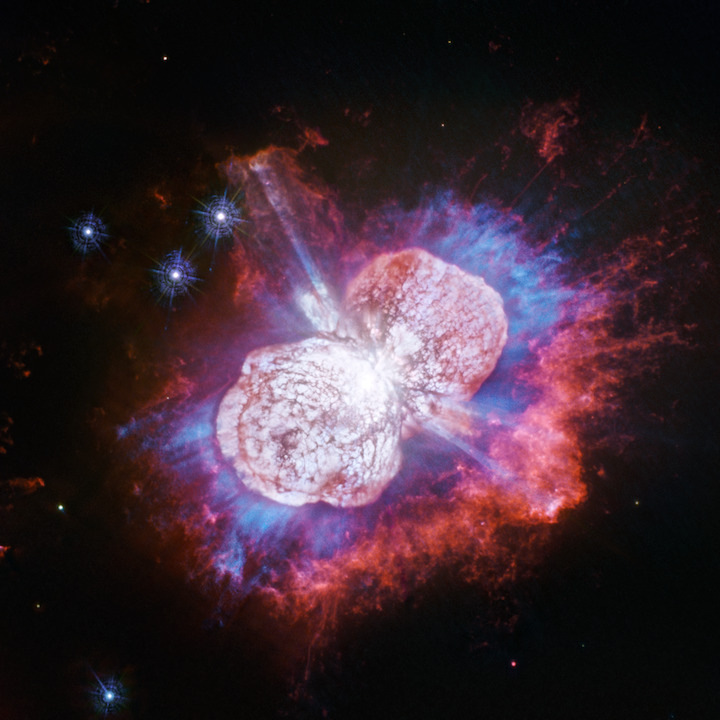 This Hubble Space Telescope image of the giant, petulant star Eta Carinae is yielding new surprises. Telescopes such as Hubble have monitored the super-massive star for more than two decades. The star, the largest member of a double-star system, has been prone to violent outbursts, including an episode in the 1840s during which ejected material formed the bipolar bubbles seen here. Now, using Hubble's Wide Field Camera 3 to probe the nebula in ultraviolet light, astronomers have uncovered the glow of magnesium embedded in warm gas (shown in blue) in places they had not seen it before. The luminous magnesium resides in the space between the dusty bipolar bubbles and the outer shock-heated nitrogen-rich filaments (shown in red). The streaks visible in the blue region outside the lower-left lobe are a striking feature in the image. These streaks are created when the star's light rays poke through the dust clumps scattered along the bubble's surface. Wherever the ultraviolet light strikes the dense dust, it leaves a long, thin shadow that extends beyond the lobe into the surrounding gas. Eta Carinae resides 7,500 light-years away.
Credits: NASA, ESA, N. Smith (University of Arizona) and J. Morse (BoldlyGo Institute)

The celestial outburst takes the shape of a pair of ballooning lobes of dust and gas and other filaments that were blown out from the petulant star. The star may have initially weighed more than 150 Suns. For decades, astronomers have speculated about whether it is on the brink of total destruction.

The fireworks started in the 1840s when Eta Carinae went through a titanic outburst, called the Great Eruption, making it the second-brightest star visible in the sky for over a decade. Eta Carinae, in fact, was so bright that for a time it became an important navigational star for mariners in the southern seas.

The star has faded since that eruption and is now barely visible to the unaided eye. But the fireworks aren't over yet because Eta Carinae still survives. Astronomers have used almost every instrument on Hubble over the past 25 years to study the rambunctious star.

In the mid-1800s, mariners sailing the southern seas navigated at night by a brilliant star in the constellation Carina. The star, named Eta Carinae, was the second brightest star in the sky for more than a decade. Those mariners could hardly have imagined that by the mid-1860s the brilliant orb would no longer be visible. Eta Carinae was enveloped by a cloud of dust ejected during a violent outburst named “The Great Eruption.”
Credits: NASA's Goddard Space Flight Center
Download this video in HD formats from NASA Goddard's Scientific Visualization Studio

Using Hubble's Wide Field Camera 3 to map the ultraviolet-light glow of magnesium embedded in warm gas (shown in blue), astronomers were surprised to discover the gas in places they had not seen it before.

Scientists have long known that the outer material thrown off in the 1840s eruption has been heated by shock waves after crashing into the doomed star's previously ejected material. In the new images, the team had expected to find light from magnesium coming from the same complicated array of filaments as seen in the glowing nitrogen (shown in red). Instead, a completely new luminous magnesium structure was found in the space between the dusty bipolar bubbles and the outer shock-heated nitrogen-rich filaments.

"We've discovered a large amount of warm gas that was ejected in the Great Eruption but hasn't yet collided with the other material surrounding Eta Carinae," explained Nathan Smith of Steward Observatory at the University of Arizona in Tucson, Arizona, lead investigator of the Hubble program. "Most of the emission is located where we expected to find an empty cavity. This extra material is fast, and it 'ups the ante' in terms of the total energy for an already powerful stellar blast."

The newly revealed gas is important for understanding how the eruption began, because it represents the fast and energetic ejection of material that may have been expelled by the star shortly before the expulsion of the bipolar lobes. Astronomers need more observations to measure exactly how fast the material is moving and when it was ejected.

The streaks visible in the blue region outside the lower-left lobe are a striking feature in the image. These streaks are created when the star's light rays poke through the dust clumps scattered along the bubble's surface. Wherever the ultraviolet light strikes the dense dust, it leaves a long, thin shadow that extends beyond the lobe into the surrounding gas. "The pattern of light and shadow is reminiscent of sunbeams that we see in our atmosphere when sunlight streams past the edge of a cloud, though the physical mechanism creating Eta Carinae's light is different," noted team member Jon Morse of BoldlyGo Institute in New York.

This technique of searching in ultraviolet light for warm gas could be used to study other stars and gaseous nebulas, the researchers say.

"We had used Hubble for decades to study Eta Carinae in visible and infrared light, and we thought we had a pretty full accounting of its ejected debris. But this new ultraviolet-light image looks astonishingly different, revealing gas we did not see in other visible-light or infrared images," Smith said. "We're excited by the prospect that this type of ultraviolet magnesium emission may also expose previously hidden gas in other types of objects that eject material, such as protostars or other dying stars. Only Hubble can take these kinds of pictures."

Eta Carinae has had a violent history, prone to chaotic eruptions that blast parts of itself into space like an interstellar geyser. One explanation for the monster star's antics is that the convulsions were caused by a complex interplay of as many as three stars, all gravitationally bound in one system. In this scenario, the most massive member would have swallowed one of the stars, igniting the massive Great Eruption of the mid-1800s. Evidence for that event lies in the huge, expanding bipolar lobes of hot gas surrounding the system.

A fortuitous trick of nature also allowed astronomers in a previous Hubble study to analyze the Great Eruption in detail. Some of the light from the eruption took an indirect path to Earth and is just arriving now. The wayward light was heading away from our planet when it bounced off dust clouds lingering far from the turbulent stars and was rerouted to Earth, an effect called a "light echo."

The stellar behemoth will eventually reach its fireworks show finale when it explodes as a supernova. This may have already happened, although the geyser of light from such a brilliant blast hasn't yet reached Earth.