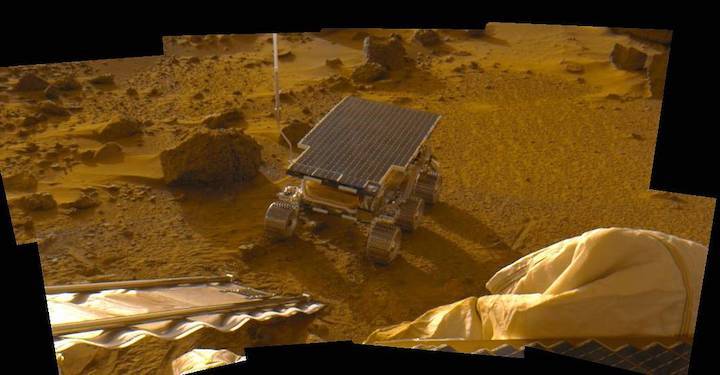 This 8-image mosaic is of Sojourner, NASA's first rover on Mars, and was acquired during the late afternoon on Sol 2, the second Martian day on the planet as part of an "insurance panorama." Sojourner arrived aboard the Mars Pathfinder on July 4, 1997.

This color image was designed as "insurance" against camera failure upon deployment. However, the camera deployment was successful, leaving the insurance panorama to be downlinked to Earth several weeks later. Ironically enough, the insurance panorama contains some of the best quality image data because of the lossless data compression and relatively dust-free state of the camera and associated lander/rover hardware on Sol 2.

Sojourner spent 83 days of a planned seven-day mission exploring the Martian terrain, acquiring images, and taking chemical, atmospheric and other measurements. The final data transmission received from Pathfinder was at 10:23 UTC on September 27, 1997. Although mission managers tried to restore full communications during the following five months, the successful mission was terminated on March 10, 1998.

Right now, NASA is taking steps to begin a new era of exploration. Working with U.S. companies and international partners, NASA will push the boundaries of human exploration forward to the Moon and on to Mars, establishing a permanent human presence on the Moon within the next decade.