The sun is entering a low-point in activity.

An animation that goes back and forth between a model of the sun's corona, published June 25, shows what researchers at Predictive Science Inc. thought this region might look like during the 2019 total solar eclipse (blue), and an actual picture of the corona taken one week later, during the event on July 2 (gray).
(Image: © Blue image: Predictive Science Inc.; Gray image: Williams College/NSF Atmospheric and Geospace Sciences Division/Jay Pasachoff/David Sliski/Alan Sliski/Christian Lockwood/John Inoue/Erin Meadors/Aris Voulgaris/Kevin Reardon)

The corona of the sun looks like a wispy, glowing ring to skywatchers viewing the totality of a solar eclipse. But this enchanting halo is also a scorching blaze of plasma with the potential to disrupt satellite, radio and GPS systems around Earth.

Therefore, developing accurate predictions of the corona's changing structure is important. And when the July 2 total solar eclipse crossed South America, a small group of scientists waited to see if the models they made using NASA Solar Dynamics Observatory (SDO) data matched up with pictures taken of the real thing. The space agency detailed this work in a statement published on Wednesday (July 3).

The corona is the sun's blazing outer atmosphere. The magnetic field of the sunchanges the structure of the corona, which releases gusts of charged particles into the solar system. Known as the solar wind, this flow creates the space weather that prompts auroras near Earth's poles, but which can also interfere with the extensive communications systems underlying modern society.

Usually, the corona is invisible, blotted out by the brightness of the inner layers of the sun. That's why eclipses are valuable opportunities to study the corona from Earth.

A team from the private, computational-physics research company Predictive Science Inc. used data from SDO, which launched in 2010, to refine a numerical model they'd previously used to predict the appearance of another total solar eclipse: the iconic event that crossed the continental United States in August 2017.

For this week's eclipse, the team focused on the solar poles in particular. That's because the sun is currently going through a lull in its 11-year cycle. During this low-activity period, called solar minimum, the poles strongly affect the star's magnetic activity — and therefore the corona's structure. 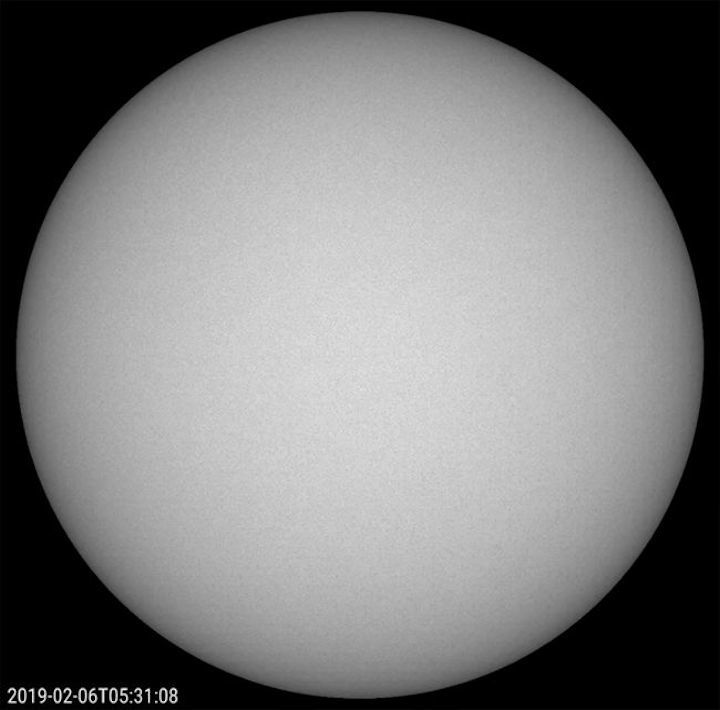 As a result of the sun's cycle approaching a lull known as the solar minimum, the surface of the star spent the entire month of February 2019 unblemished by sunspots, according to NASA. The agency's Solar Dynamics Observatory took this picture in white-filtered visible light on Feb. 6, 2019.

By running the model on Pleiades, "one of the world's most powerful supercomputers" according to the agency, the researchers came up with a detailed prediction featuring a cloudy corona with two wide, hazy streamers on opposite sides of each other. They published their final total-eclipse prediction on June 25.

Now, they've compared that prediction with how the corona really looked on July 2. While their hypothesis was not totally accurate, the researchers were happy to see how close they got. 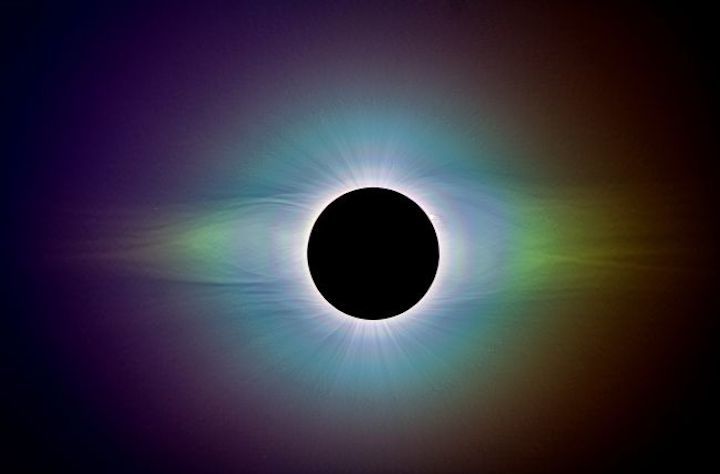 An image of the sun's corona based on data gathered during the total solar eclipse that occurred on July 2, 2019.

"I'm thrilled," Predictive Science researcher Cooper Downs said in the statement. "I'm already looking at the details we got wrong and where we can improve. But it's fantastic to see there will be quality scientific measurements that we can compare in detail to, and much to learn from, that comparison."

SDO and missions like NASA's Parker Solar Probe and the European Space Agency's upcoming Solar Orbiter will be gathering more data about the corona in the years to come.