Some of the world's largest telescopes will be watching as the Moon blocks the Sun's disk and reveals its corona on July 2, 2019.

Any view of totality is enthralling, but the July 2nd total solar eclipse in the South Pacific, Chile, and Argentina is particularly tantalizing for astronomers. Totality will pass right over several of the best telescopes in the world — including those at Cerro Tololo Inter-American Observatory (CTIO), Gemini South, La Silla Observatory, and the future sites of the Large Synoptic Survey Telescope and the Giant Magellan Telescope. 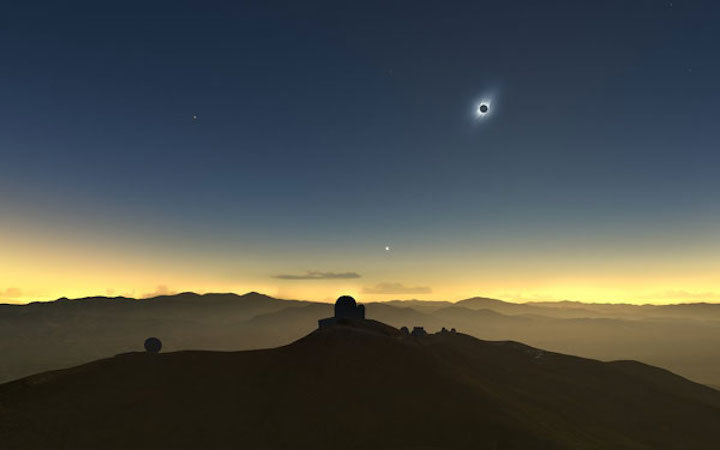 When the Moon blocks the Sun’s disk, it reveals the white light of the outer solar atmosphere. This corona is the source of the magnetic storms that the Sun sends our way, so it’s a subject of intense study — largely from space, where spacecraft use occulting disks to block the Sun. But a total solar eclipse lets us study this region from the ground. And the eclipse on July 2nd will let professional astronomers study this region using some of the best telescopes on the planet.

At the CTIO, five groups of astronomers will be viewing the eclipse:

Professional observatories are also taking this opportunity to reach out to the community. In collaboration with the CTIO, the Gemini South observatory has held school and public talks on eclipse viewing and photography. Likewise, La Silla Observatory is taking the opportunity to host a public event, inviting Chilean schoolchildren and other members of the public for a viewing party, as well as lectures and workshops.

Other observatories not on the eclipse path, such as the Atacama Large Millimeter/submillimeter Array (ALMA), are also engaging in outreach, as well as handing out eclipse glasses for the event. And they’re not the only ones: Astronomers Without Borders, a nonprofit organization dedicated to uniting people across the world through astronomy, is providing eclipse glasses, too — ones that were collected following the American eclipse of 2017.

As always, eclipse-viewing — and experimenting — is weather-dependent. (Unless you’re flying above the weather!) While people may maneuver to see the eclipse from another vantage point, large observatories aren’t quite so mobile. So for all those astronomers pointing their telescopes skyward on July 2nd: Clear skies!

Solar Eclipse 2019 in Chile: Chasing Totality in the Atacama Desert

A travelogue of one Space.com reporter's journey to see the total solar eclipse of July 2, 2019. 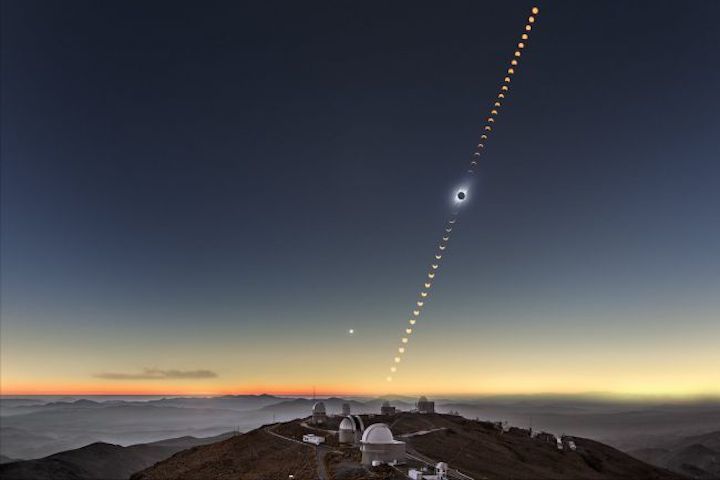 To watch the total solar eclipse of July 2, 2019, I set out to the Atacama Desert in Chile, where totality will make its first landfall in South America.

On the day of the eclipse, I'll be making the 90-mile (150 kilometers) drive up from La Serena, Chile to the La Silla Observatory, the European Southern Observatory's (ESO) oldest telescope facility, where thousands of visitors will congregate to watch the moon cross in front of the sun.

This isn't my first total solar eclipse — but I am hoping it will be my first time seeing totality! For the Great American Solar Eclipse of Aug. 21, 2017, I traveled to Nashville, Tennessee, where one very obnoxious cloud stole the show right before totality. The weather forecast for this next eclipse seems promising, but I'm keeping my fingers crossed!

You can read about my eclipse-chasing adventures in Chile in my travelogue below. I will post updates periodically (WiFi permitting) during the days leading up to the eclipse and on the big day itself.

THE BLAZING SCIENCE OF THIS YEAR'S TOTAL SOLAR ECLIPSE 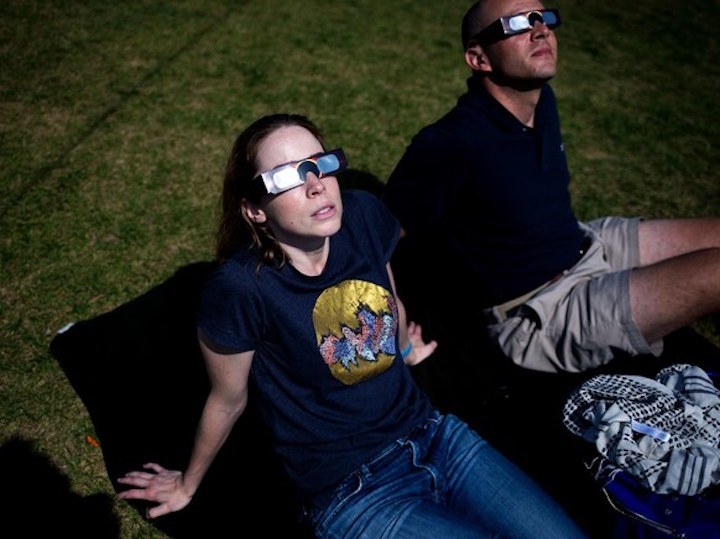 AFTERNOON AT 12:55 pm ET, a total solar eclipsewill streak across lower South America, giving thousands of eclipse enthusiasts—and millions of first-timers—gathered in Chile and Argentina an otherworldly thrill. And it will give scientists the opportunity to study the solar corona in a way only possible when an object the size of the Moon perfectly covers the solar disk. By acting as a filter, this celestial event exposes solar details that are otherwise far too dim and intricate to observe.

These gatherings recur roughly every 18 months, when a total eclipse slashes across Earth’s surface at any number of locations. Some of them last just a few seconds; others stretch up to seven minutes. (You might remember the United States’ own captivating encounter in 2017.) That period of totality has traditionally been the only time when the sun becomes dim enough for its atmosphere to be observed directly. As a result, the scientists who specialize in solar research routinely end up working in odd locations around the world—sometimes even aboard private jetschartered to chase the shadow and stretch out its duration—to dig into the only first-hand coronal science this planet has to offer.

Tomorrow’s eclipse, however, will be special for several reasons. First, it takes place during a low-activity period in the solar cycle, called the minimum, meaning the views for certain researchers will be a little clearer and more nuanced given the lack of “clutter,” or activity such as flares and prominences emanating from the surface. Also, it will pass directly over an area that is home to major astronomical research observatories, including the Cerro Tololo Inter-American Observatory, Gemini South, and the European Southern Observatory’s La Silla Observatory. Those large telescopes will all remain shuttered for the event—their instruments are too sensitive for even greatly dialed-down solar exposure—but visiting solar scientists will still benefit from the research expertise and the pristine observing conditions present at those locations in the Atacama Desert.

The scientists now gathered in Chile will execute their research during the roughly two hours of the partial-eclipse phases of the event and the scant 2 minutes of totality anticipated for the Chilean segment of the eclipse. The Association of Universities for Research in Astronomy (AURA), which operates the Cerro Tololo observatory—from where I will be reporting tomorrow for WIRED—has selected five science teams from around the world to convene at its facility for their studies.

Among them will be veteran eclipse-chaser Jay Pasachoff, a professor of astronomy at Williams College. His team will be continuing an examination of the Sun’s corona that began in the 1990s, mapping its changes over the years and from solar cycle to solar cycle, each of which lasts 11 years. The effort looks in part at the solar eruptions known as coronal mass ejections, which are increasingly considered a threat to satellites orbiting Earth. As a result, Pasachoff’s studies have a uniquely urgent terrestrial payoff. “The Sun gives off these burps of electromagnetic radiation and particles,” he explains. “They can strike satellites and cause tremendous damage to the electronic circuits. But even with a few minutes’ warning, the operators can take steps to protect satellites.” For example they can adjust the satellites’ power settings or orient them in such a way as to protect critical components. “The more we understand about these eruptions, the better and faster we’re able to predict them,” Pasachoff says.

Observing the eclipse during the solar minimum will also give Pasachoff’s team a chance to observe solar plumes, which are bright rays of light breaking through the corona and typically hidden by larger coronal structures called streamers that are present during more active periods during the cycle. The 7,241-foot altitude of Cerro Tololo will provide uniquely clear views of the corona during this eclipse, Pasachoff adds.

Elsewhere on Tololo, a team from the University Corporation for Atmospheric Research will be investigating the sun’s magnetic field. Structures within that field can affect space weather and thus the sun’s more nuanced impacts on Earth, beyond the light and warmth it provides. During the eclipse, they plan to point their telescopes—with polarizing filters attached—at the sun to measure the polarization of the light in the corona as a proxy for its magnetic field. “At the moment, we can measure the magnetic fields on the surface and then run models to extrapolate these into the corona,” says lead researcher Paul Bryans. “These models are not perfect, though, and so the only way to robustly determine the field in the corona is to actually measure it from the corona.”

His team will be up against some challenges on Tololo, though. The late afternoon timing of the eclipse, when the sun and moon will be low to the horizon, will make measurements more difficult, he says, because their observations will have to be done through a much thicker sliver of atmosphere than when they’re pointing their instruments, say, straight up at the sky. Also, unlike Pasachoff, the current phase of the solar cycle poses a problem for his group: “Being near solar minimum means the coronal light will likely be less intense than at maximum,” Bryans adds. “Both of these effects combined mean that the signal will be reduced and make the detection more difficult.”

Other projects include an effort to study changes in Earth’s own atmosphere during the eclipse, conducted by the Institute of Astrophysics of the Canary Islands and the “Solar Wind Sherpas from Hawai’i,” a group from the University of Hawaii that will study the sun’s corona from three different sites across Chile and Argentina. This team used the same strategy during the US eclipse in 2017 to track changes in the corona over very short distances—just a few hundred miles between observation points. A team from the National Astronomical Observatory of Japan will also be observing from several sites in both countries, in their case examining the corona close to the Sun itself, filling in an area not visible to space-borne solar observatories. Amateur observers will be contributing their images to the study from the eclipse, as well.

But as compelling as all these efforts may be, the eclipse in South America could also be special for another, possibly bittersweet, reason: It may be the last eclipse in which scientists have to “chase” the moon’s shadow to study the solar corona. Next year, the Daniel K. Inouye Solar Telescope in Hawaii will begin operations, allowing for the study of the solar corona on an ongoing basis, no lunar interference needed. It will be the largest solar telescope in the world, equipped with a wide range of sensors that are better able to cut through the sun’s brightness and observe the intricacies of its composition and behavior, and with adaptive optics to negate disruptions in Earth’s atmosphere.

Though the telescope will certainly make many scientists’ jobs much easier, Pasachoff doesn’t seemed overly concerned that the new observatory will ruin the thrill of eclipse chasing. “Even the magnificent capabilities of the DKIST and the altitude on Haleakala don’t match the dark sky that occurs during totality during an eclipse,” he says. “So the detailed observations of the middle corona that we make at eclipses will remain unique for the foreseeable future.” He adds that the new telescope also can’t generate wide-field views the way smaller telescopes can during eclipses—allowing for study of the farthest reaches of the coronal footprint—nor can it match the resolution of the instrumentation on the Solar and Heliospheric Observatory now in orbit around Earth.

As with so many scientific quests, the thinking among researchers is the more the merrier, whether the data is collected in space, on a mountain in Hawaii, or anywhere else in the world where the moon decides to cast its shadow. But even if it does take a bite out of eclipse-based research, the magic of the event will likely continue luring those same researchers and enthusiasts around the world every 18 months, like solar clockwork.

Want to see an eclipse yourself? If you missed the 2017 event in the US—or just want to take another crack at it—start preparing for the 2024 eclipse that will swing from Mexico to Canada, cutting straight across the US from Texas to Maine.