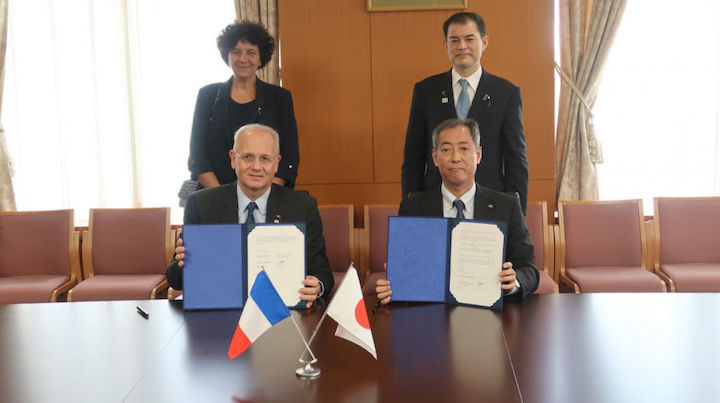 On the occasion of the State visit to Japan by Emmanuel Macron, two agreements on the exploration of Phobos and the asteroid Ryugu were settled on June 26th between the CNES and the Japan Space Exploration Agency (JAXA).

The first agreement is about the furtherance of the preparations for the MMX (Martian Moon Exploration) mission which is intended to deploy a space probe in 2024 toward Phobos, one of the two moons of Mars, to carry out a sample return five years later.

The feasibility studies were launched in April 2017. The next step is to prepare the detailed definition phase of the mission (phase B).

The second agreement is related to the samples collected by the Japanese probe Hayabusa 2 on the asteroid Ryugu, which should return on Earth in December 2020.

Their analysis will be carried out in the JAXA Extraterrestrial Sample Curation Center, with the use of the French instrument MicrOmega developed by the Institut d’astrophysique spatiale (IAS)  under the responsibility of the astrophysicist Jean-Pierre Bibring.