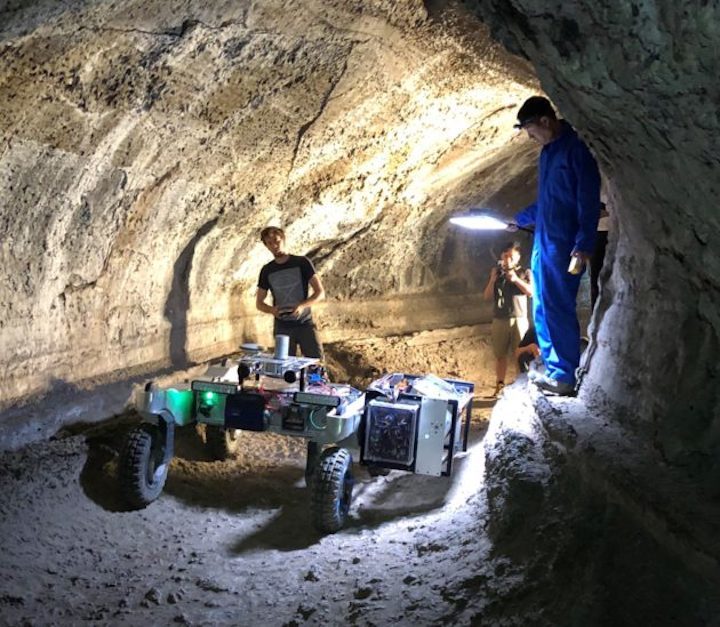 BELLEVUE, Wash. — Underground lava tubes are great places to set up bases on the moon, or look for life on Mars — but they’ll be super-tricky to navigate. Which is why a NASA team is practicing with a cave rover in California.

Scientists are sharing their experiences from the Biologic and Resource Analog Investigations in Low Light Environments project, or BRAILLE, here at this week’s Astrobiology Science Conference.

The site of the experiment is California’s Lava Beds National Monument, which houses North America’s largest network of lava tubes. These are tunnel-like structures left behind by ancient volcanic flows of molten rock. They’re known to exist on the moon and Mars, and in some places there are even openings that make those lava tubes accessible from the surface.

The underground passageways provide shelter from the harsh radiation hitting the surface of the moon and Mars, which would be a big plus for would-be settlers. There’s even a chance that microbes could find a foothold in lava tubes on Mars, as they do on Earth.

One of BRAILLE’s big goals is to learn how to use remote-controlled robots to blaze a trail through off-Earth caves. The cave rover, nicknamed CaveR, is the star of the show. During last year’s initial three-week expedition, CaveR was outfitted with imagers and scientific instruments, and then guided through Valentine Cave, one of the more than 750 caves in the Lava Beds system.

“We were following a mission plan, just like you would for a regular planetary mission,” said BRAILLE principal investigator Jennifer Blank, an astrobiologist at NASA Ames Research Center who’s also affiliated with Seattle’s Blue Marble Space Institute of Science.

A surface team of planetary scientists drew up the driving instructions for each of CaveR’s forays through Valentine Cave and saved them to a memory card. Then a runner carried the card down to the cave, where a team of engineers would execute the instructions. The data gathered during each drive was stored up and brought back to mission control for analysis. Then the cycle began again.

Blank said the team decided against trying to beam the commands down to the rover directly. “NASA has that capability, but to incorporate that in our mission simulation would have required another million dollars,” she told GeekWire. 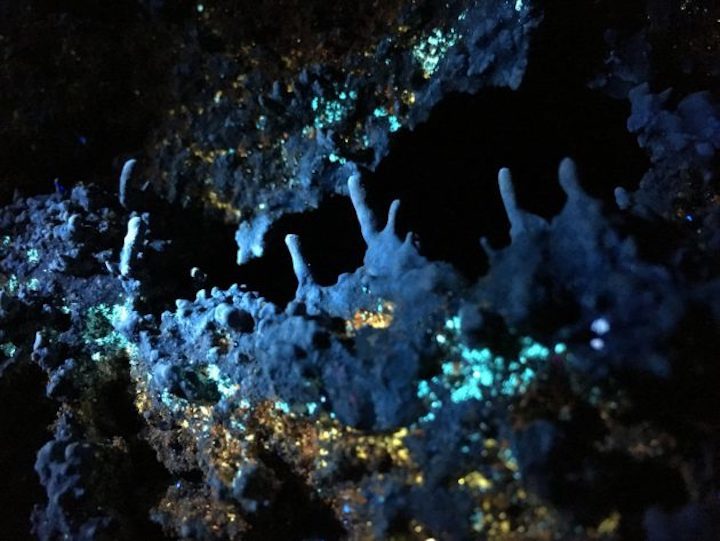 While the planetary scientists pored over the rover data, a different team composed of expert microbiologists checked out the cave on foot. Both teams spotted telltale signs of microbial life, in the form of tiny outcroppings that look like coral.

“The first group saw the microbial features as strange crystals, unusual features to examine … The second group, right away they saw that they were biomarkers,” Blank said. “It really shows that a diverse team is very valuable.”

BRAILLE’s researchers scraped samples from several caves in the Lava Beds system, and they plan to return for another round of exploration later this year. They’re also working on artificial intelligence tools that could sift through rover imagery and identify potential hotspots for life. It’s not exactly a new idea: NASA is already using an autonomous sample targeting system known as AEGIS on its Mars Curiosity rover.

CaveR’s exploits in California should help scientists figure out what to look for when next-generation robots go spelunking on the Red Planet. “If we’re so lucky to go to a cave on Mars, and so lucky to find signs of life protected from the harsh surface environment and had to pick a target, what would we interrogate?” Blank said.

Lava-tube rovers would be used for different purposes on the moon. “We don’t think there’s life to find on the moon now, but someday the life on the moon might be us,” Blank explained in a NASA news release. “And if I were going to the moon, I’d want to go to a lava tube.”

Rovers could create detailed maps of the underground passageways, looking for fractures, cave-ins or other structural issues that would pose problems for a potential moon base. They could also look for signs of water ice that could sustain a moon base, above or below ground.

One of the instruments on CaveR is the Near-Infrared Volatiles Spectrometer System, or NIRVSS (pronounced like “nervous”). That instrument is designed to identify frozen water that’s present in rocks and soil — and a flight-ready version could be sent to the moon on a rover as early as next year.