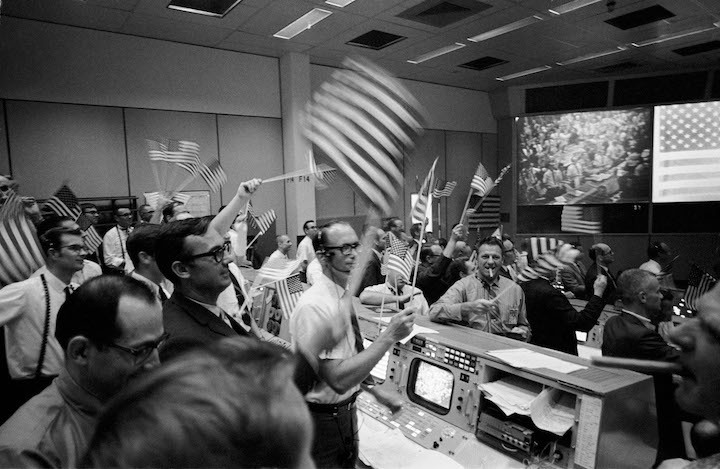 Overall view of the Mission Operations Control Room in the Mission Control Center at the Manned Spacecraft Center showing the flight controllers celebrating the successful conclusion of the Apollo 11 lunar landing mission on Jul 24, 1969.
Credits: NASA

On July 20, 1969, the United States achieved the most profound milestone of human accomplishment when it landed NASA astronauts Neil Armstrong and Buzz Aldrin on the Moon, while their command module pilot Michael Collins orbited above. The extraordinary team of experts that guided these first three brave astronauts on their journey ran the hour-by-hour operations of the Apollo 11 mission from a facility at NASA’s Johnson Space Center in Houston – a facility that has been given a new life as a source of learning and inspiration.

The Apollo Mission Control Center has been restored to appear as it did in that era just in time to celebrate the 50th anniversary of the Apollo 11 Moon landing.

“Apollo captured the world’s attention and demonstrated the power of America’s vision and technology, which has inspired generations of great achievements in space exploration, and scientific discovery,” said Johnson’s Director Mark Geyer. “Our goal 50 years ago was to prove we could land humans on the Moon and return them safely to Earth. Our goal now is to return to the Moon to stay, in a sustainable way. I’m thrilled this facility will be open for the public to view. It is my hope that it will serve as inspiration for generations to come.”

In this facility, NASA flight control teams planned, trained and executed Gemini, Apollo, Apollo/Soyuz, Skylab and Space Shuttle program missions until 1992. The facility was designated a National Historic Landmark by the National Park Service in 1985, and in 2018, it was renamed the Christopher C. Kraft Jr. Mission Control Center in honor of the man who developed the concepts still used today in human spaceflight control.

“By restoring the Apollo Mission Control Center, NASA is preserving the rich history of a remarkable achievement in human spaceflight,” said Restoration Project Manager Jim Thornton. “This will not only help share our history with visitors from around the world, but also remind our current employees who are planning missions to send humans back to the Moon and then further to Mars, that anything is possible and we are standing on the shoulders of giants.”

Throughout the years, some work was done to partially restore the facility to its Apollo-era configuration, but the full restoration project did not begin until 2017, after five years of planning and fundraising. Space Center Houston, Johnson’s official visitor center operated by the nonprofit Manned Space Flight Education Foundation Inc., spearheaded an effort to raise the $5 million needed for the project, of which the nearby city of Webster, Texas, donated $3.5 million.

“Thanks to the City of Webster and worldwide support, the treasured landmark is now restored, preserving it for future generations,” said William Harris, president and CEO of Space Center Houston. “We can gain incredible insight through the accomplishments of the Apollo era and the room will continue to inspire people and innovators to chase their dreams.”

NASA cannot accept public donations for restricted purposes, so the Advisory Council on Historic Preservation played an important role in administering funds for this project.

“The Mission Control Center restoration project is the first time the Advisory Council on Historic Preservation has used the special authority granted to it by the National Historic Preservation Act that enables it to accept private donations and transfer them to other federal agencies for preservation purposes,” said advisory council Chairman Milford Wayne Donaldson. “It is not surprising that NASA, an agency known for achieving the new and exceptional, is paving the way for other agencies to do what they have done – preserve an incredible piece of our nation’s and the world’s history through a unique public-private partnership.”

The restoration team included representatives of the Apollo Mission Control teams that supported astronauts on their missions. Great pains were taken by these individuals to ensure the authenticity of the control room and the artifacts inside. The pieces in the restored control room, visitor’s gallery and adjacent simulation support room are either original artifacts that were cleaned and restored, such as the control consoles and displays, or the items have been recreated based on original samples. This includes paint colors, carpet, coffee mugs, clothing items, and even ashtrays. The artifacts all were placed just as they were 50 years ago.

More than a million visitors from around the world visit Space Center Houston annually and now they will have a chance to view this restored historical site – stepping back in time to the first Moon landing, and looking forward to America’s next Moon landing.

To hear the restoration experts talk about the challenge and success of the renovation visit, listen to the June 14 episode of “Houston, We Have a Podcast:”