Scientists using NASA’s Hubble Space Telescope have confirmed the presence of electrically-charged molecules in space shaped like soccer balls, shedding light on the mysterious contents of the interstellar medium (ISM) – the gas and dust that fills interstellar space. 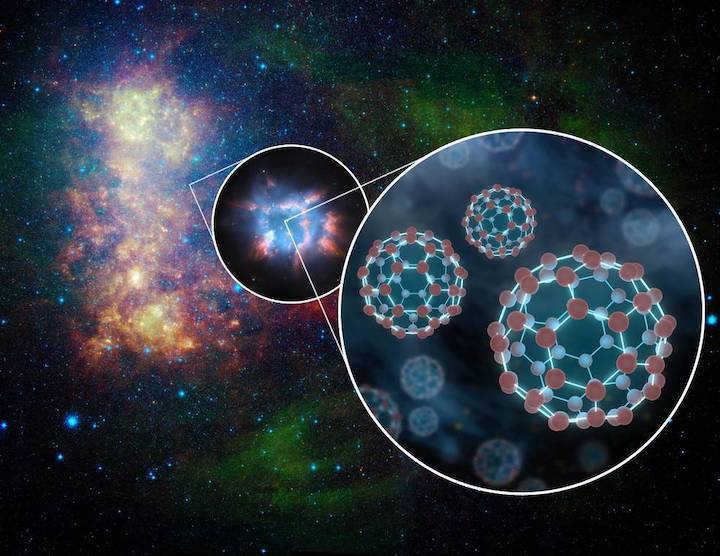 This is an artist's concept depicting the presence of buckyballs in space. Buckyballs, which consist of 60 carbon atoms arranged like soccer balls, have been detected in space before by scientists using NASA's Spitzer Space Telescope. The new result is the first time an electrically charged (ionized) version has been found in the interstellar medium.
Credits: NASA/JPL-Caltech
Original caption

Since stars and planets form from collapsing clouds of gas and dust in space, “The diffuse ISM can be considered as the starting point for the chemical processes that ultimately give rise to planets and life,” said Martin Cordiner of the Catholic University of America, Washington. “So fully identifying its contents provides information on the ingredients available to create stars and planets.” Cordiner, who is stationed at NASA’s Goddard Space Flight Center in Greenbelt, Maryland, is lead author of a paper on this research published April 22nd in the Astrophysical Journal Letters.

The molecules identified by Cordiner and his team are a form of carbon called “Buckminsterfullerene,” also known as “Buckyballs,” which consists of 60 carbon atoms (C60) arranged in a hollow sphere. C60 has been found in some rare cases on Earth in rocks and minerals, and can also turn up in high-temperature combustion soot.

C60 has been seen in space before. However, this is the first time an electrically charged (ionized) version has been confirmed to be present in the diffuse ISM. The C60 gets ionized when ultraviolet light from stars tears off an electron from the molecule, giving the C60 a positive charge (C60+). “The diffuse ISM was historically considered too harsh and tenuous an environment for appreciable abundances of large molecules to occur,” said Cordiner. “Prior to the detection of C60, the largest known molecules in space were only 12 atoms in size. Our confirmation of C60+ shows just how complex astrochemistry can get, even in the lowest density, most strongly ultraviolet-irradiated environments in the Galaxy.”

Life as we know it is based on carbon-bearing molecules, and this discovery shows complex carbon molecules can form and survive in the harsh environment of interstellar space. “In some ways, life can be thought of as the ultimate in chemical complexity,” said Cordiner. “The presence of C60 unequivocally demonstrates a high level of chemical complexity intrinsic to space environments, and points toward a strong likelihood for other extremely complex, carbon-bearing molecules arising spontaneously in space.”

Most of the ISM is hydrogen and helium, but it’s spiked with many compounds that haven’t been identified. Since interstellar space is so remote, scientists study how it affects the light from distant stars to identify its contents. As starlight passes through space, elements and compounds in the ISM absorb and block certain colors (wavelengths) of the light. When scientists analyze starlight by separating it into its component colors (spectrum), the colors that have been absorbed appear dim or are absent. Each element or compound has a unique absorption pattern that acts as a fingerprint allowing it to be identified. However, some absorption patterns from the ISM cover a broader range of colors, which appear different from any known atom or molecule on Earth. These absorption patterns are called Diffuse Interstellar Bands (DIBs). Their identity has remained a mystery ever since they were discovered by Mary Lea Heger, who published observations of the first two DIBs in 1922.

A DIB can be assigned by finding a precise match with the absorption fingerprint of a substance in the laboratory. However, there are millions of different molecular structures to try, so it would take many lifetimes to test them all.

“Today, more than 400 DIBs are known, but (apart from the few newly attributed to C60+), none has been conclusively identified,” said Cordiner. “Together, the appearance of the DIBs indicate the presence of a large amount of carbon-rich molecules in space, some of which may eventually participate in the chemistry that gives rise to life. However, the composition and characteristics of this material will remain unknown until the remaining DIBs are assigned.”

Decades of laboratory studies have failed to find a precise match with any DIBs until the work on C60+. In the new work, the team was able to match the absorption pattern seen from C60+ in the laboratory to that from Hubble observations of the ISM, confirming the recently claimed assignment by a team from University of Basel, Switzerland, whose laboratory studies provided the required C60+ comparison data. The big problem for detecting C60+ using conventional, ground-based telescopes, is that atmospheric water vapor blocks the view of the C60+ absorption pattern. However, orbiting above most of the atmosphere in space, the Hubble telescope has a clear, unobstructed view. Nevertheless, they still had to push Hubble far beyond its usual sensitivity limits to stand a chance of detecting the faint fingerprints of C60+.

The observed stars were all blue supergiants, located in the plane of our Galaxy, the Milky Way. The Milky Way's interstellar material is primarily located in a relatively flat disk, so lines of sight to stars in the Galactic plane traverse the greatest quantities of interstellar matter, and therefore show the strongest absorption features due to interstellar molecules.

The detection of C60+ in the diffuse ISM supports the team’s expectations that very large, carbon-bearing molecules are likely candidates to explain many of the remaining, unidentified DIBs. This suggests that future laboratory efforts measure the absorption patterns of compounds related to C60+, to help identify some of the remaining DIBs.

The team is seeking to detect C60+ in more environments to see just how widespread buckyballs are in the Universe. According to Cordiner, based on their observations so far, it seems that C60+ is very widespread in the Galaxy.

This work was funded by NASA under a grant from the Space Telescope Science Institute. The Hubble Space Telescope is a project of international cooperation between NASA and ESA (European Space Agency). NASA's Goddard Space Flight Center in Greenbelt, Maryland, manages the telescope. The Space Telescope Science Institute (STScI) in Baltimore, Maryland, conducts Hubble science operations. STScI is operated for NASA by the Association of Universities for Research in Astronomy in Washington, D.C. NASA is exploring our Solar System and beyond, uncovering worlds, stars, and cosmic mysteries near and far with our powerful fleet of space and ground-based missions.