Half a century after man first walked on the moon, Neil Armstrong and Buzz Aldrin remain household names. Everyone knows about Armstrong’s “small step for man,” but the myriad other people behind the “giant leap for mankind” remain largely unknown.

One of those is Bill Weppner, a former NASA flight controller who worked on the Apollo missions. Weppner was at the NASA mission control center in Houston when Armstrong took those first steps on the moon. He was there when Apollo 8 became the first manned space mission to leave low Earth orbit and circle the moon. He was there for the duration of the “successful failure” of Apollo 13. 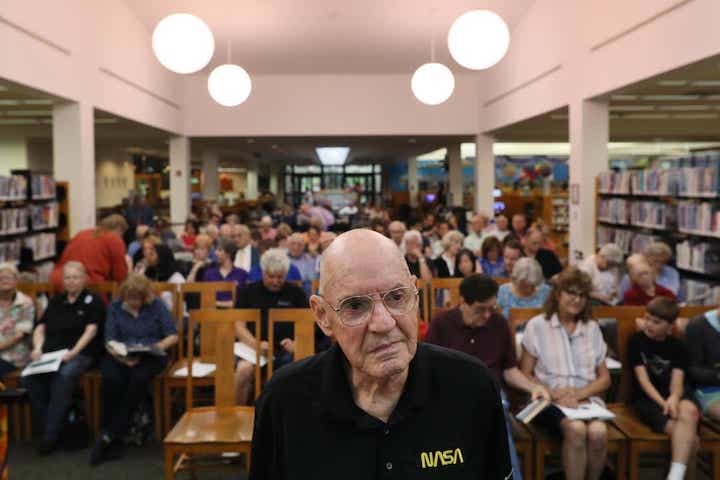 Bill Weppner, a former NASA flight controller who worked on the space program's Apollo missions, at the Germantown library to talk about his experiences Tuesday, June 18, 2019.
Joe Rondone/The Commercial Appeal

On Tuesday, Weppner — who lives in the Memphis area and teaches mathematics at Southwest Tennessee Community College — was at the Germantown Library to share his mission control stories, one month before the 50th anniversary of the moon landing.

“I feel so proud to have worked there and to have been there at that time,” he said.

Weppner worked on at least seven missions during about 2½ years at NASA, part of a decades-long career in the U.S. Air Force. He gave the NASA buffs gathered at the library an overview of the American space program, from the development of rockets as a means to potentially launch nuclear warheads against the Soviet Union to the Mercury, Gemini and Apollo missions, including the highlights and lowlights.

"Not all launches were successful, especially the early ones,” he said, showing a video compilation of launch failures. 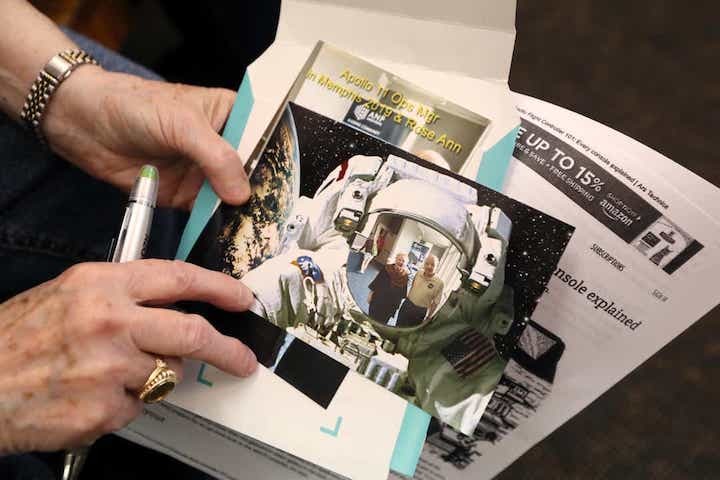 Rose Ann Bradley holds a photo of her and Bill Weppner, a former NASA flight controller who worked on the space program's Apollo missions, during his talk at the Germantown library Tuesday, June 18, 2019.
Joe Rondone/The Commercial Appeal

The successful Mercury missions proved the U.S. could put a man in space and keep him in orbit. The Gemini missions showed men could be kept in space for longer periods and that spacewalks were possible.

“These guys I would classify as heroes,” he said of the Gemini astronauts. Some of the missions took up to two weeks, forcing the crew to endure extremely cramped and uncomfortable conditions.

Weppner arrived at NASA in time to work on Apollo 7, the first Apollo mission to put men in space and the first manned space flight in two years. He was one of about 200 Air Force airmen working at NASA at the time and was told he was being sent there “to help put a man on the moon.” 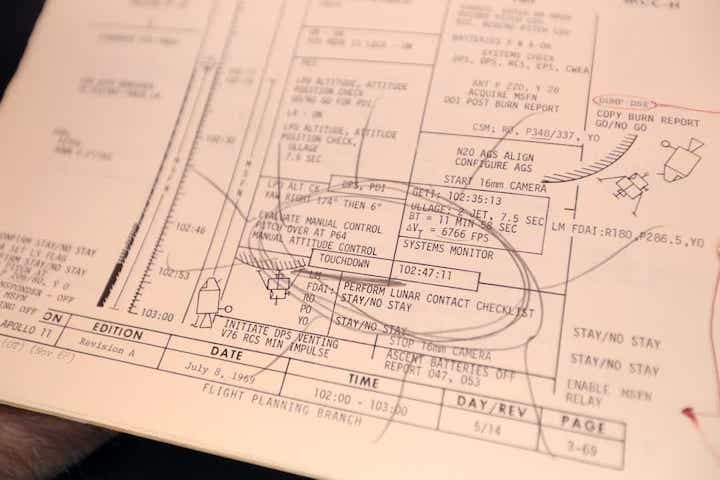 A circled portion of a space exploration log sheet points to the moment NASA landed on the moon. The paperwork was brought to the Germantown library by Bill Weppner, a former NASA flight controller who worked on the space program's Apollo on Tuesday, June 18, 2019.
Joe Rondone/The Commercial Appeal

“It was a win-win for everybody,” Weppner said. “The Air Force paid our salary and NASA got some free labor.”

Apollo 8, which launched Dec. 21, 1968, was Weppner’s favorite mission. He recently got a vanity license place reading “Apollo8” to commemorate it. Those astronauts were the first humans to see the far side of the moon and the first to get far enough away from the earth to look back on it in its entirety, a moment captured in the iconic “Earthrise” photo, taken Dec. 24, 1968.

“That was my favorite mission because everything was new,” he said. “We had never done it before. We had never, the crew had never.”

Weppner, who specialized in propulsion, was at mission control when Armstrong and Aldrin stepped out onto the surface of the moon on July 20, 1969. That event turned into an exhausting 36-hour shift, he said, when they decided to take that famous excursion earlier than planned.

There were more long days to come during the Apollo 13 mission when an oxygen tank explosion two days after launch meant the astronauts had to abort their moon landing and make critical repairs in space — without cabin heat, with limited power and running low on drinking water — to make it back to Earth safely. 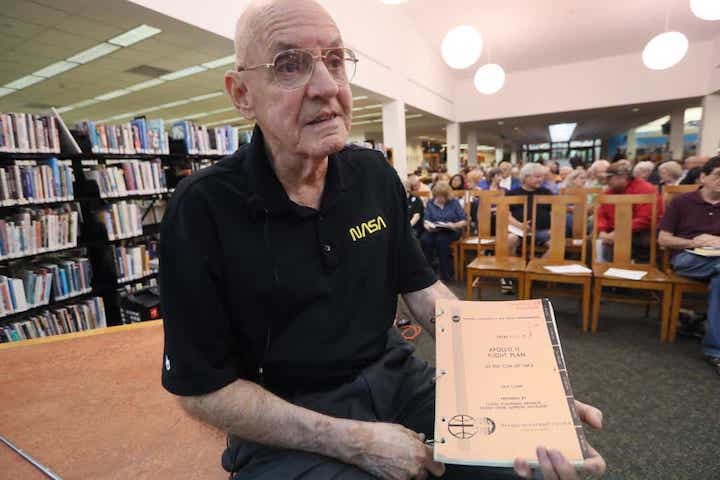 Bill Weppner, a former NASA flight controller who worked on the space program's Apollo missions, at the Germantown library to talk about his experiences Tuesday, June 18, 2019.
Joe Rondone/The Commercial Appeal

There were moments of levity at mission control, he recalled, usually when the astronauts were safely asleep in space. Weppner recalled how a coworker got his necktie stuck in a recording machine and how flight controllers in different areas of the building would have races with the pneumatic tubes — like the ones used at bank drive-thrus — used for sending messages between departments. After missions, he said, the engineers would get together with the crew “and spend all our coffee money on beer.”

He described the job as “something special” but said one of the things he was most proud of was the way the missions were relayed to the public.

“What’s special, I thought, was that everything was covered by the three networks,” Weppner said, referring to ABC, NBC and CBS. “Everything was done live. Nothing was recorded and played back.”

He acknowledged that the control room in the 1960s was a boys' club — he knew of one female flight controller at the time — but also pointed out that most of the people working a mission control didn’t have highly pedigreed backgrounds. The thing they had in common, “apart from being white men,” was that they almost all only had bachelor’s degrees in math or science, from average colleges and universities. Weppner happily pointed out that NASA boasted a more diverse staff now, with two leaders on the next Mars rover mission being women of color. 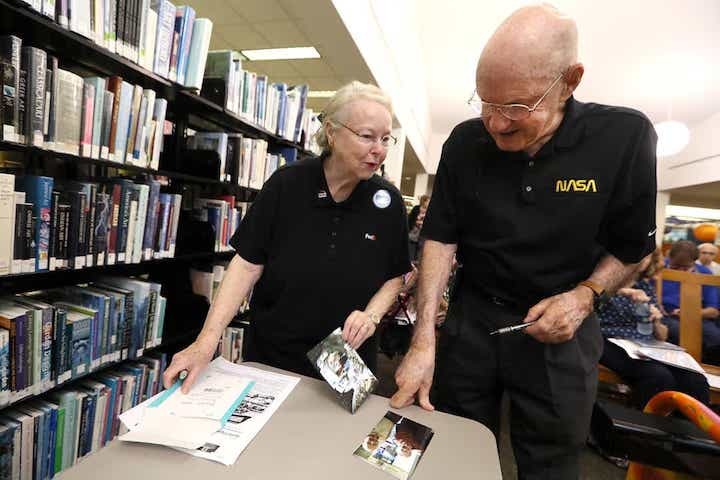 Bill Weppner, a former NASA flight controller who worked on the space program's Apollo missions, chats with Rose Ann Bradley as he signs a few photos before giving a talk about his experiences at the Germantown library Tuesday, June 18, 2019.
Joe Rondone/The Commercial Appeal

Next month, Weppner will head back to mission control in Houston for more Apollo 11 celebrations, seeing people he hasn’t seen in 50 years. He said he’ll probably cry when he visits.

Half a century later, NASA is working to put humans on the moon again with the Artemis mission and is using unmanned spacecraft to explore Mars and learn about the outer reaches of our solar system. But an entire universe remains to be explored. Finishing his talk, Weppner pointed to the younger faces in the crowd.

“The next question is, where to next?”