Thin Martian clouds may come from specks of dust, the remains of destroyed meteors. 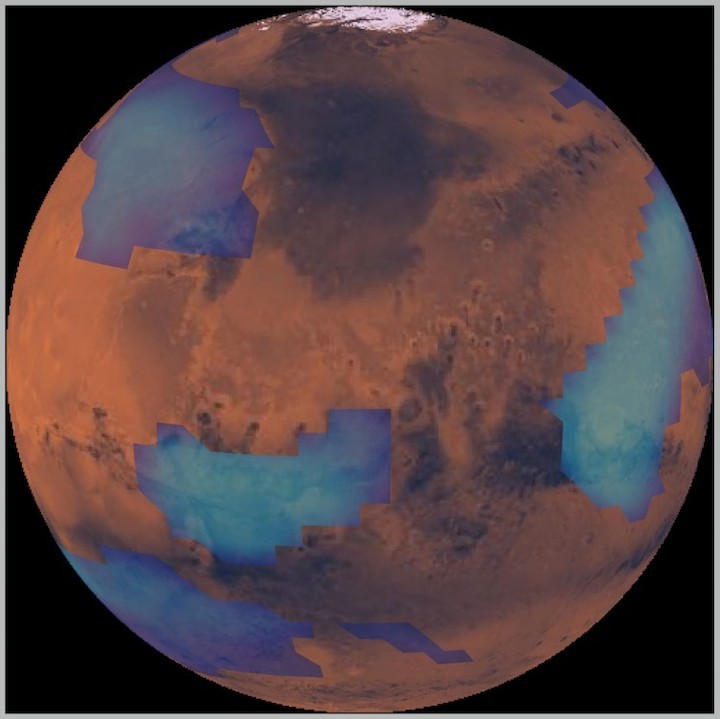 Cotton candy clouds in the middle atmosphere of Mars may owe their life to dying meteors.

New research suggests that the atmospheric destruction of meteors creates tiny particles of dust that can seed the thin clouds. The discovery may help solve the mystery of how the wispy clouds grow in the middle atmosphere, improving scientists' understanding of the Martian climate both of today and in the past.

"Clouds don't just form on their own," Victoria Hartwick, a graduate student at the University of Colorado Boulder and lead author on the new paper, said in a statement. "They need something that they can condense onto."

On Earth, water molecules stick to tiny grains of sea salt or dust blown into the air until they form the white wisps visible from the ground as clouds. But Mars lacks sea salt, and scientists haven't been able to explain the presence of midatmospheric clouds by studying dust particles on the Red Planet.

Nevertheless, Mars and Earth have another cloud seed in common. Previous studies have shown that dust from destroyed meteors, known as meteoritic smoke, may help build clouds near Earth's poles. Hartwick and her colleagues investigated if meteoritic smoke could similarly create the clouds that hover in the middle atmosphere of Mars, below other known types of clouds.

"Our model couldn't form clouds at these altitudes before [we included meteorite impacts]," Hartwick said. "But now, they're all there, and they seem to be in all the right places."

The research was published today (June 17) in the journal Nature Geoscience.

A glimpse of ancient Mars

Scientists have already cracked the secret of a different Martian cloud type. Forty miles (65 kilometers) above the Red Planet's surface, clouds of carbon dioxide ice float through the atmosphere. These clouds form as mineral dust is swept up from the surface, allowing water molecules to attach to the material and grow clouds.

But circulation models have struggled to explain the thinner clouds that lie from 18 to 37 miles (30 to 60 km) above the surface, in the middle of the atmosphere. These thin, cotton candy-like clouds are smaller than most Earth clouds, but they could dramatically affect the Martian climate.

Each day, 2 to 3 tons of meteorites, most of them relatively small, crash into the Martian atmosphere. As the heated passage through the atmosphere tears these meteorites apart, they spew a significant amount of dust into the air.

An unusual rock spotted by NASA's Curiosity rover appears to be a meteorite. Much smaller meteors may be seeding the Red Planet’s atmosphere to allow wispy clouds to form.

To determine if meteors burning up in the atmosphere could serve as seeds for the tenuous clouds, Hartwick and her colleagues combined data taken from NASA's Mars Atmosphere and Volatile Evolution (MAVEN) satellite with massive computer simulations that mimicked the flows and turbulence of the planet's atmosphere. The researchers found that including meteoritic smoke in the simulations created clouds and conditions similar to those observed on the Red Planet.

The new simulations also revealed that the thin clouds could cause significant temperature fluctuations, of as much as 18 degrees Fahrenheit (10 degrees Celsius). When a pole reaches its winter months, changing air temperatures and pressures increase the amount of meteoritic smoke, which in turn pushes the low-hanging clouds higher than in simulations without micrometeoroids. The thin, meteoroid-built clouds of the middle atmosphere also strengthen the twice-daily temperature oscillations in the middle atmosphere, as well as the large-scale atmospheric circulation, the authors wrote.

The discovery could help reveal information not only about the weather conditions on present-day Mars but also about the planet's past climate. Ancient Mars was a warmer, wetter world, with water running across its surface. How the planet lost its water remains a mystery.

"More and more climate models are finding that the ancient climate of Mars, when rivers were flowing across its surface and light might have originated, was warmed by high-altitude clouds," study co-author Brian Toon, who studies clouds on Earth and beyond at the University of Colorado Boulder, said in the same statement. "It is likely that this discovery will become a major part of that idea for warming Mars."