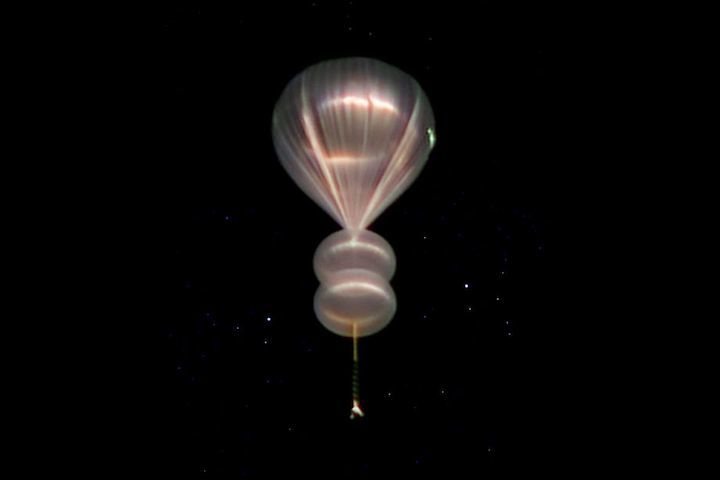 World View Enterprises — the company aiming to hoist payloads and people to high altitudes with giant balloons — has kept one of its vehicles afloat for the longest time yet. Today, the company announced that one of its payload-carrying balloons remained at high altitude for a consecutive 16 days before landing safely back on Earth. It’s the latest milestone on World View’s quest to keep a high-altitude balloon up for a full 60 days.

The balloon vehicle that World View has been testing is the company’s Stratollite system. The idea behind it is to create a vehicle that functions like a satellite, without requiring an expensive rocket launch to orbit. World View’s Stratollites are designed to leisurely float to an altitude between 50,000 and 75,000 feet where they’re meant to hover over the same patch of Earth for up to two months at a time. From that height, whatever payload or instruments the balloon is carrying can gather data of the same part of the surface continuously, similar to a stationary satellite in a high orbit.

World View still has a ways to go before the Stratollite’s promised capabilities are fully realized. But the company has been getting closer to its goals through a series of tests. Before this most recent test flight, World View had only flown a Stratollite for five days at a time. Then on May 18th, the company launched this latest test vehicle out of World View’s headquarters in Tucson, Arizona, with the goal of staying up for just two weeks, and it was able to stick it out for an extra two days before coming back down.

While in the air, the Stratollite vehicle tried out various ways of station-keeping, staying above the same plot of land for hours at a time. “The ability to provide persistence over an area of interest was an important part of this flight,” Ryan Hartman, president and CEO of World View, tells The Verge. Stratollites are designed to “sail” on air currents, using the directional winds at high altitudes to stay in one spot. If the wind is moving the balloon too far in one direction, the vehicle will drop or rise to a different current to maintain a relatively stable position.

“THE ABILITY TO PROVIDE PERSISTENCE OVER AN AREA OF INTEREST WAS AN IMPORTANT PART OF THIS FLIGHT.”

During the 16-day flight, World View was able to spend up to eight days total in an area about 75 miles wide. It also demonstrated more precise station-keeping, says Hartman, by spending 55 straight hours in a region 62 miles wide and also 6.5 hours in an area a little less than 6 miles wide.

Staying within such a small area is crucial for the Stratollite system, as that capability could be useful for a number of different applications for customers, according to Hartman. He notes that such a system above Earth could be used by the military to aid certain missions operations, or the Stratollite could help monitor natural disasters like tornadoes and hurricanes, and help with disaster relief. “There’s just all kinds of very important use cases when we can provide a station keeping capability in an area as small as a [6-mile] diameter area,” says Hartman. 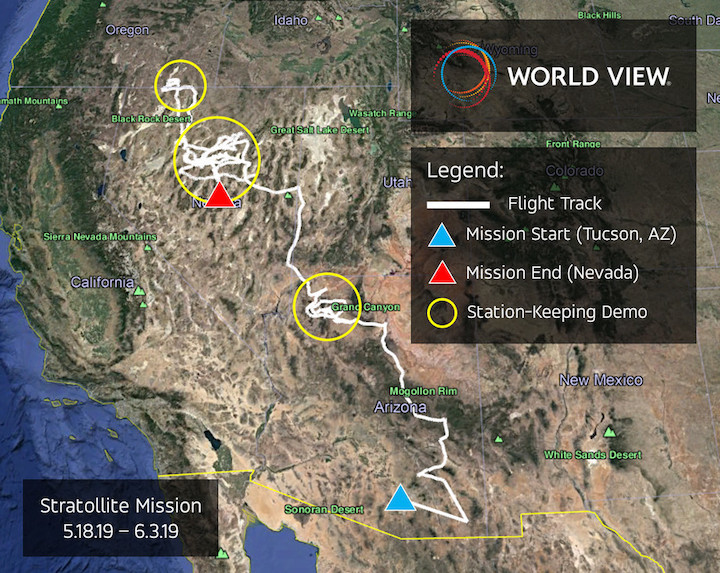 Throughout this flight, the Stratollite covered a distance of 3,000 miles, making its way to the Grand Canyon, Nevada, Oregon, and Utah. Once the World View team decided to bring the Stratollite back down to Earth, the company was able to land it within 400 feet of a targeted area in the Nevada desert where the vehicle was then recovered. World View even hopes to fly some of the components from this flight on an upcoming mission.

The next big milestone is to keep a Stratollite up for a full 30 days, which would bring World View even closer to opening up the system to commercial customers. That may or may not be the goal for the next test flight, depending on what the company learns from this most recent test. “With every flight, we’re going to learn something that will make the next flight a little bit better,” says Hartman. “And we’ll always be making progress.” Eventually, World View hopes to finalize the Stratollite product by the end of the year and go to market by 2020.

“WITH EVERY FLIGHT, WE’RE GOING TO LEARN SOMETHING THAT WILL MAKE THE NEXT FLIGHT A LITTLE BIT BETTER.”

World View isn’t the only company looking to capitalize on the benefits of high-altitude balloons. Google’s Project Loon is also hoping to use balloons to provide internet coverage from high in the sky, claiming it can keep its vehicles afloat for between 100 and 200 days. World View hasn’t explicitly expressed any plans for providing internet coverage, but the company says it already has customers signed up and interested in the service. However, Hartman won’t say which organizations are involved. “A lot of the work that we’re doing is based on what the market needs from us,” says Hartman. “And so we look forward to bringing them a product to the market and supporting those customers.”

Additionally, World View’s long-term goals also include sending people, not just instruments, high into the sky on a program called Voyager. But those plans are seemingly on the back burner as the company focuses on Stratollites. “Once we have Stratollite in the marketplace, we’ll turn our attention to our future products,” says Hartman.

Prior to the completion of this mission, the longest duration Stratollite flight stood at just five days. This mission moves World View one step closer to scaled commercial operations and productization of the Stratollite and the unique data sets it provides. The Stratollite enables persistent, near-real time, very-high resolution remote sensing over large specified areas of interest for commercial and government customers around the world.

Key Facts & Figures from the Mission:

“This is a great accomplishment for our team and a key step on the path towards productizing the Stratollite and the unique data sets it will provide for our customers,” said Ryan Hartman, World View President and CEO. “Affordable, real-time, persistent intelligence from a high-altitude platform does not exist today. We are continually inspired by the positive impact such a capability could have on the world, and today marks a big steptowards that vision.”

World View’s Stratollite is a long-endurance stratospheric flight vehicle capable of station-keeping over areas of interest for remote sensing and communications. World View’s proprietary altitude-control technology allows it to harness

Stratollites can carry a wide variety of commercial payloads (sensors, telescopes, communications arrays, etc.), launch rapidly on demand and safely return payloads back to Earth after mission completion. Among its wide variety of uses, the Stratollite will help researchers greatly advance knowledge of planet Earth, improve our ability to identify and track severe weather, and assist first responders during natural disasters.

On Monday, June 3rd, 2019, following the successful 16-day mission, World View personnel identified and navigated the system above a safe landing zone in a remote part of Nevada. The team then concluded the mission and executed a safe and controlled descent and landing, followed by recovery of all flight components, many of which will be prepared for refurbishment and re-use in subsequent missions. 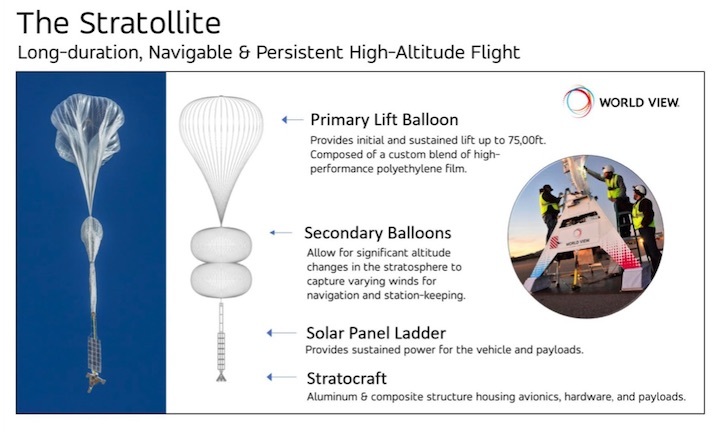