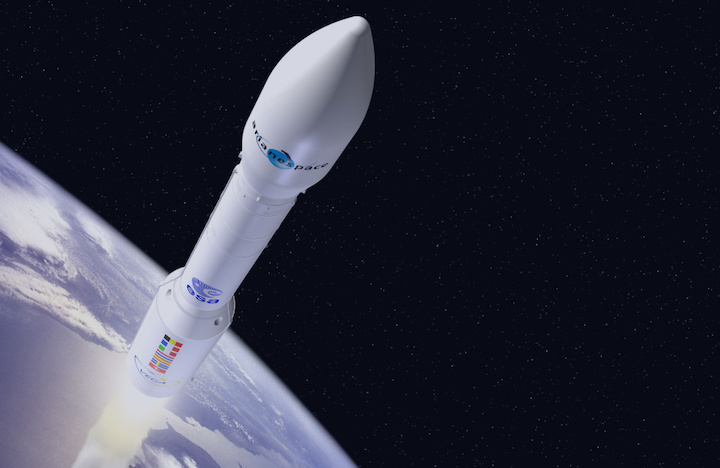 Arianespace’s future ambitions in the launch services market will be focused on two new launch vehicles. The Ariane 6 and Vega-C rockets will be tasked with covering a multitude of payload requirements and will evolve together via commonality of hardware. Vega-C is set to conduct her maiden flight in 2020 and is currently in the qualification phase. The first stage booster of Vega-C will also become the strap-on boosters for Ariane 6 as the two rockets facilitate independent European access to space.

This latest phase will test and verify the design and manufacturing processes, assembly and flight hardware and software, and associated ground support systems.

The ArianeGroup has successfully test-fired its second P120C solid rocket motor, a step forward toward initial launches of the Vega-C light satellite launcher and the Ariane 6 heavy satellite launcher, the latter being the launcher that will ultimately replace the long-serving and successful Ariane 5 launch vehicle.

The P120C first stage solid was tested on the BEAP test stand at the European Spaceport in Kourou, French Guiana, firing for 135 seconds in a successful test.

The test of qualification motor 1 (QM-1) came six months after the all-new P120C’s first test, the firing of the development motor (DM) on July 16, 2018 and over four years after the program was initially approved as a common motor to power two different launch vehicle families, the Vega-C (common booster) follow-on to the Vega launcher and the Ariane 6.

It has been advertised by ESA that one final static fire test (QM-2) would be conducted in the summer. However, ESA noted that “the hot firing tests of the P120C first stage in Kourou, and the Zefiro 40 second stage in Sardinia qualify these solid rocket motors for flight,” in a release on Tuesday.

“Additionally aerodynamic wind tunnel tests, vibration, structural and shock tests have been performed. These milestones mark the completion of all engine and motor testing. ”

Daniel Neuenschwander, Director of ESA Space Transporation noted that all engines that will be used on Vega-C stages have now completed a successful test firing, noting that the next phase is to test integration between the pad and the new launch vehicle.

Reviews of the system and subsystems – integrating all launcher system and launch base aspects -have been successfully completed. This will be followed by a launch system preliminary requirements review planned mid-2019.

The P120C, which will be the first stage of the Vega-C launcher, as well as the strap-on booster for the Ariane 6 series, has the world’s largest monolithic carbon-fiber composite solid rocket booster casing and is 44 feet (13.5 meters) long, 11 feet (3.4 meters) wide. 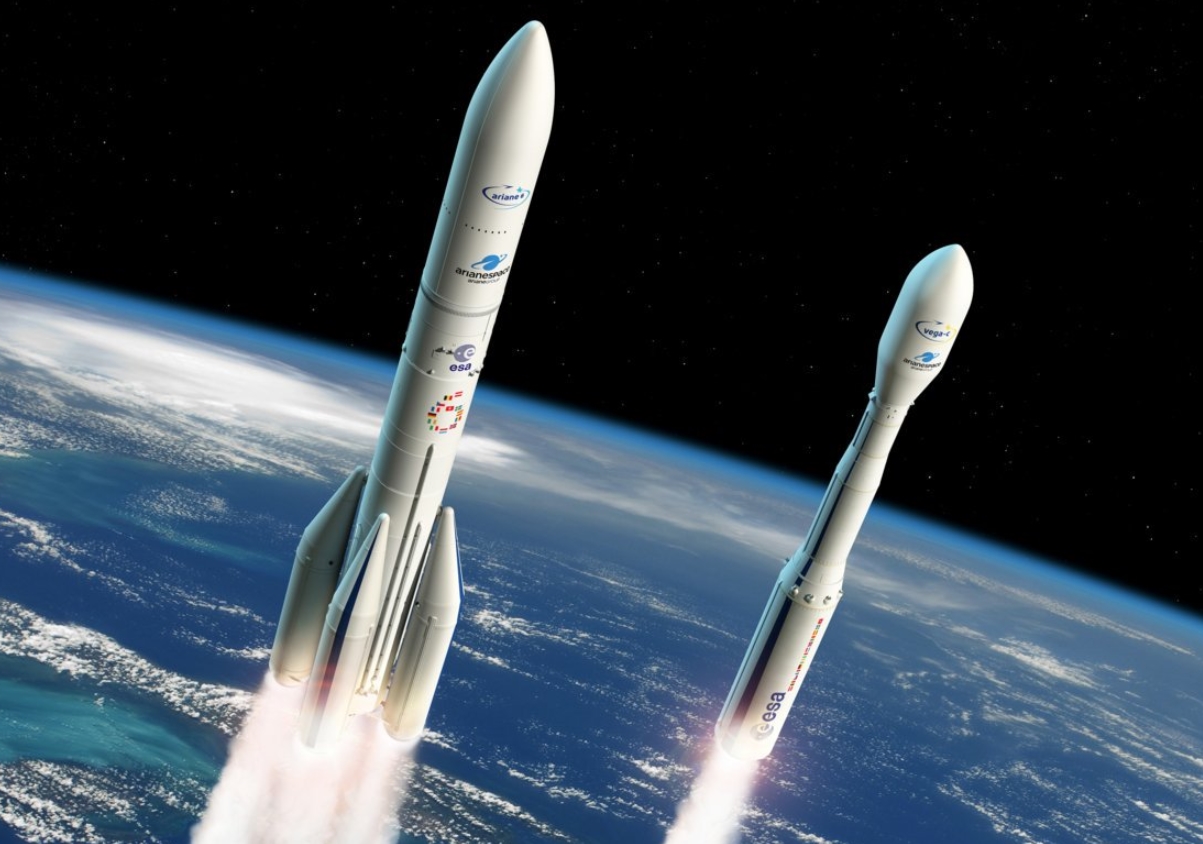 In addition, the Ariane 6 is designed to use two or four P120C’s as strap-on boosters to offer a flexible configuration choice while offering similar capability to the Ariane 5 family at a much-reduced cost.

The new launch pad for the upgraded Ariane 6 is already deep into its construction phase, while the existing Vega pad has been upgraded in-situ. Mobile gantry cantilever reinforcements, platform shutters, a new mast sector and a new overhead traveling crane are now installed.

In a flood of releases and content on Tuesday, ESA and its partners promoted Vega-C’s vast array of mission capabilities, following from its 100 percent success rate with the original Vega rocket. These range from equatorial to Sun-synchronous orbits, from orbital to suborbital missions, from single to multiple payloads.

“Vega-C builds on these capabilities and will become the pillar of the Vega Space Transportation System, offering a range of payload carriers for different shapes and sizes of payloads ranging from 1 kg to 2300 kg, for ‘access to’, ‘operations in’, and ‘return from’ space,” noted ESA on Tuesday.

The current Vega vehicle will be in action again this summer with a proof of concept flight associated with its future evolution. Vega will deploy multiple small satellites using its new payload carrier system, the Small Spacecraft Mission Service, or SSMS, for the growing small satellites market.

“This rideshare launch will carry seven microsatellites and 35 CubeSats. The SSMS will also launch on Vega-C from 2020 offering 700 kg of extra payload capacity inside a larger fairing,” added ESA.

Additional payload adaptors include an enhancement to Vega’s Vespa payload adapter for dual passengers, and the Vampire for single large payloads.

The Space Rider system – a follow on to the test vehicle known as the Intermediate eXperimental Vehicle (IXV) – will provide payload return capability for Europe when launching with the Vega-C.

Developments are also underway for a Vega Electrical Nudge Upper Stage, Venus, which will provide the orbital transfer capability to satellites to extend its market reach with constellation deployment, lunar mission and in-orbit servicing. 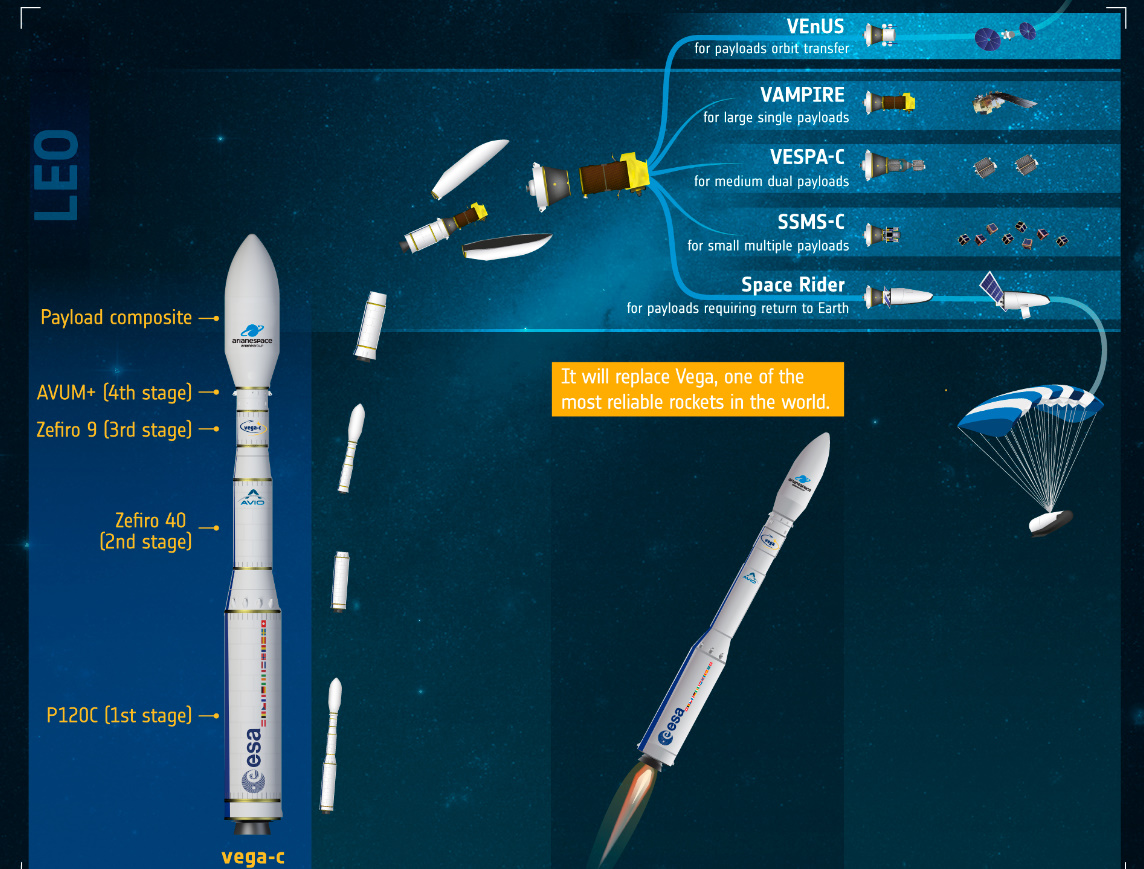 However, the evolution of Vega won’t be complete with Vega-C, with another advancement set to be the Vega-Evo (or Vega-E), which will take the vehicle past 2025, offering a family of configurations based on common building blocks. The Vega-Evo activities are running in parallel with Vega-C development.

This will allow for a family of configurations based on existing building blocks and those under development (P120C, P80, Z23, Z40, Z9, AVUM, VUS) capable of improving the system’s competitiveness for the normal Vega-C payload class and in the small–satellite market.

The main element of this evolution is a new European cryogenic upper stage powered by a 10 t-class liquid oxygen and methane expander cycle engine. This would replace the current Zefiro-9 and AVUM. 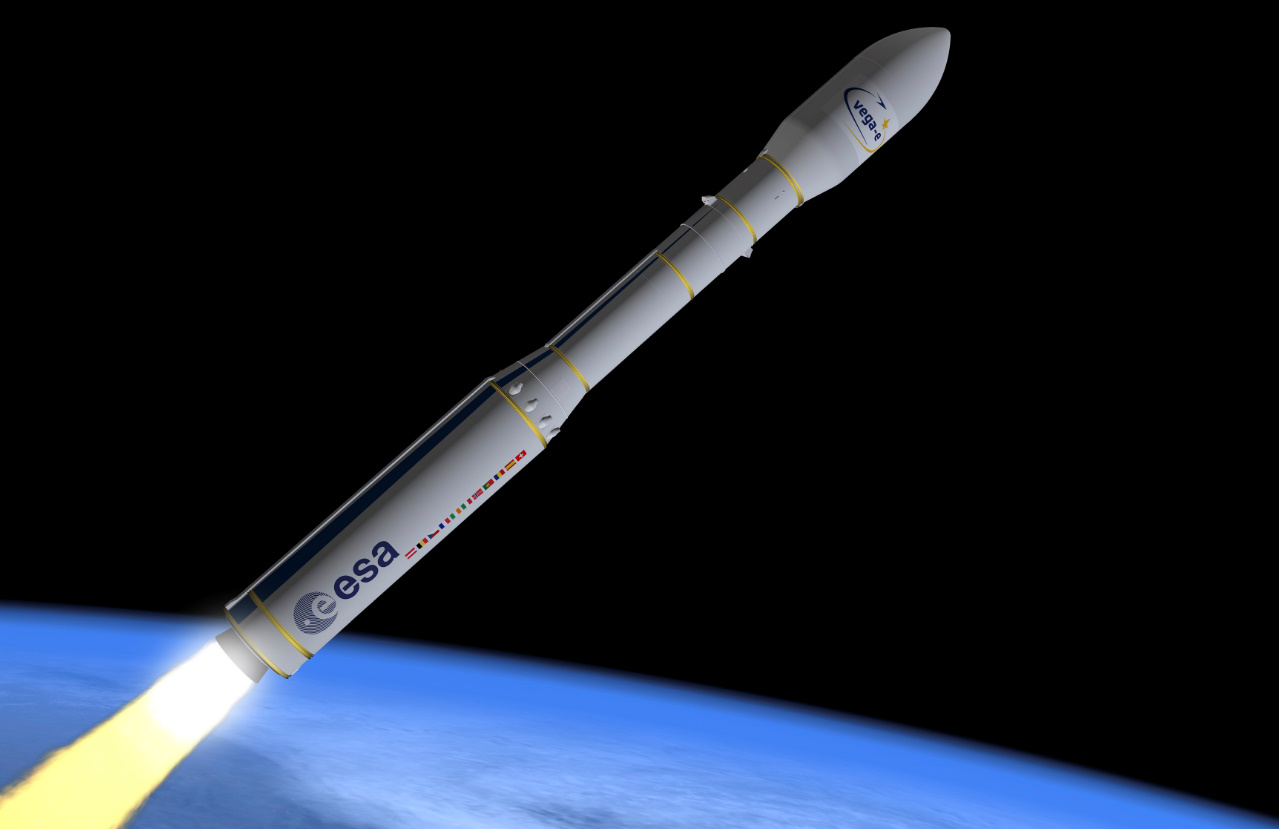 New technologies such as additive manufacturing will be evaluated and a new roll and attitude control system using hydrogen peroxide will be developed, with potential earlier applications on Vega-C and Space Rider.

In the meantime, the current Vega is preparing for her 15th mission, with the Falcon Eye 1 payload arriving at the launch site for its upcoming launch.

Falcon Eye 1 is a high-resolution Earth-imaging satellite for the United Arab Emirates. Built by Airbus Defense and Space with an optical imaging payload from Thales Alenia Space, Falcon Eye 1 is the first of two surveillance satellites ordered by the UAE’s military.

The VV15 mission for Vega is currently scheduled to launch next month. More than 40 satellite missions will be launched at once by Europe’s Vega launcher this autumn, thanks to the innovative modular “Lego-style” dispenser resting on its upper stage.

Up until now the smallest classes of satellites – all the way down to tiny CubeSats, built from 10 cm modular boxes – have typically ‘piggybacked’ to orbit. They have to make use of any spare capacity as a single large satellite is launched, meaning their overall launch opportunities are limited. “Our development of this new SSMS dispenser – able to group together different satellites from 1 kg to 400 kg in mass – is a response to the market for these small- and micro-satellite missions, which has grown exponentially in recent years.”

The inaugural ‘proof of concept’ flight of Vega’s SSMS dispenser will take place this September, with 41 separate passengers: seven small satellites plus 35 CubeSats in all. Included in that total are a trio of ESA CubeSats: the SIMBA mission studying Earth’s radiation budget, ozone-measuring Picasso and PhiSat, investigating the application of artificial intelligence to Earth observation.

Giorgio adds: “Regular follow-on SSMS flights are planned for 2020 on, once the more powerful Vega-C launcher begins operations. This will offer an extra 700 kg of capacity and enlarged volume within a wider launcher fairing – at the same Vega launch cost as before – so we will be able to fly even more passengers per individual SSMS launch at significant lower cost per kilo.”

The SSMS dispenser has been designed to be as market-responsive as possible, able to accommodate any combination of customers, from a main large satellite with smaller companions as piggy back to multiple smaller satellites, or dozens of individual CubeSats.

“The idea of how to do this came out of an ESA study,” says Giorgio. “Basically the SSMS is composed of different modular parts, which can be put together as needed, Lego-style: a central column, tower or hexagon, a supporting platform, adjustable rods and dividers.”

In a first for any ESA launcher, part of the payload integration takes place in Europe, streamlining the cost and effort required by lean small satellite companies. Satellites are placed onto the lower part of the SSMS by its manufacturer, SAB Aerospace in the Czech Republic, with the top-level satellites added at Europe’s Spaceport in Kourou, French Guiana ahead of launch. This inaugural flight will deliver all its passengers to the same 550 km altitude ‘Sun synchronous orbit’, remaining lined up with the Sun for optimal Earth observing conditions. But in future Vega could deliver satellites to three separate orbits per SSMS flight.

Once its target orbit is achieved the SSMS, controlled through the avionics systems in Vega’s Attitude & Vernier Upper Module (AVUM) upper stage, will deploy its satellites in coordinated fashion, with carefully planned delays in between each separation. In a matter of minutes they will all be pushed away smoothly using springs. When deployment is completed the AVUM will deorbit itself and its SSMS dispenser, fulfilling stringent international space debris regulations governing low-Earth orbit.

The three-stage solid propellant Vega launcher with a liquid-fuelled re-ignitable AVUM upper stage has been flying since 2012. Its SSMS dispenser is only one of a range of current developments, to allow Vega to respond to the full portfolio of market needs.

“We aim to affordably fly everything from a 1-kg CubeSat all the way up to a 2.3-tonne satellite, with still greater capacity on the way through our Vega Evolution programme. “And as well as the SSMS for several small payloads, we have the Vespa adapter for dual medium size payloads, in addition to the baseline Vampire adapter for single large payloads. The reusable Space Rider system is also under development for payloads requiring return to Earth, as well as the Venus electric-propulsion module under definition for missions to higher orbits.”

Adding to Vega’s competitiveness is a perfect safety record, with 14 out of 14 launches successful. “ESA, our prime contractor Avio and all our partner companies are fully committed to delivering a successful product,” says Giorgio. “And ESA’s core Vega Integrated Programme Team at ESRIN draws expertise from wherever  is available, working closely with ESA’s Directorate of Technology Quality and Engineering and Directorate of Operations, Italian space agency ASI and French space agency CNES. Working with all the best available competencies in Europe is a strong reason for our success to date.”

Rockets are the backbone of all space-based endeavours. ESA in partnership with industry is developing next-generation space transportation vehicles, Ariane 6, Vega-C, and Space Rider. At Space19+, ESA will propose further enhancements to these programmes and introduce new ideas to help Europe work together to build a robust space transportation economy. This week, take a look at what ESA is doing to ensure continued autonomous access to space for Europe and join the conversation online by following the hashtag #RocketWeek