The Starlink satellites launched by SpaceX two weeks ago have come under heavy criticism for their potential to clutter the sky. Author Jan Hattenbach sat down with Stijn Lemmens, Senior Space Debris Mitigation Analyst at the European Space Agency (ESA) in Darmstadt, Germany, to talk about how Starlink plays into the space junk problem. 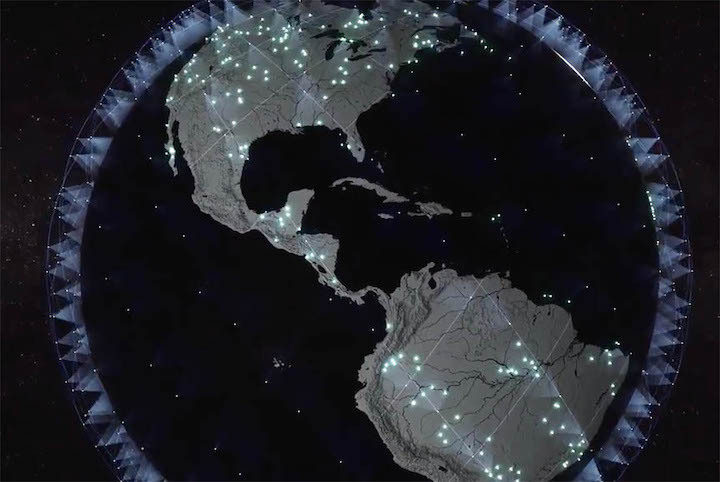 Jan Hattenbach: The recent launch of the first 60 “Starlink” satellites has sparked outrage on social media. Some critics claim the “mega-constellation” of satellites by the U.S. company SpaceX will increase the risk of creating more space junk, even calling it a threat to space flight itself. What is your opinion — is this criticism justified or exaggerated?

Stijn Lemmens: We're talking about a constellation that — if it ever comes to full fruition — would include up to 12,000 members. Several nations have launched almost 9,000 satellites over the past six decades. Of these, about 5,000 are still in orbit. So we are talking about doubling the amount of traffic in space over a couple of years, or over a decade at most, compared to the last 60 years.

However, the space debris issue is mostly caused by the fact that we leave objects behind in orbit, which are then a target for collisions either with fragments of a previous collision event or with big, intact objects. Currently, most space debris comes from explosive break-up events; in the future, we predict collisions will be the driver. It's like a cascade event: Once you have one collision, other satellites are at risk for further collisions.

Over the past two decades, there has been a lot of effort to establish guidelines and codes of conduct. For low-Earth orbit (LEO), there is a well-known guideline to take out your spacecraft, satellite, or launch vehicle upper stage, within 25 years after the end of mission.

However, we are not really good at doing this at the moment. We’re talking about success rates of 5% to 15% for satellites (launch vehicle orbital stages do notably better, with success rates of 40-70% in low-Earth orbit). Already with current traffic, we have reasonable concerns that we're creating a real debris issue out there.

If we're now thinking about putting another couple of thousands of satellites up there, with levels of compliance similar to what we've been doing so far, then we're talking about a possible catastrophe.

Operators of any type of large satellite constellation would have to behave far better than most current actors in spaceflight have been doing. And this is the concern: Before you launch, operators can of course say and demonstrate that they are going to comply with all international norms and guidelines. But it's only after launch that we know how responsible their behavior actually was.

JH: Do you have the impression that SpaceX is aware of their responsibility?

SL: They are certainly aware of the problem. For example, to get a license to launch in the U.S. with a mission like theirs, where they are exchanging data between the mainland, space, and other operators, you need to request a license, in this case from the Federal Communications Commission (FCC). To obtain this license, they must demonstrate what they will do with respect to space debris mitigation. So they needed to demonstrate a certain adherence to the norms.

But the real question is whether the current norms are actually sufficient for large constellations, or if we are putting the bar too low with respect to future sustainability. We are talking about thousands of new satellites — the risk is that the cumulative effect is not captured in the current level of guidelines. So SpaceX would have to voluntarily demonstrate higher levels of commitment.

JH: When asked about these issues, SpaceX responded that they believe they have the “most advanced system” for space debris mitigation, e.g. that the Starlink satellites are “designed to be capable of fully autonomous collision avoidance – meaning zero humans in the loop.” Are you confident that such a system will work, especially considering the numbers?

SL: I have no technical visibility on how they implement their system, so I cannot make a judgment if it will work with their satellites or not. What I can say is that it will require a certain improvement on the current state-of-the-art. On the other hand, if a pair of Starlink satellites does collide within the operation orbit, SpaceX will be the first one who will be badly affected by the fragmentation cloud the collision generates. It's in their own best interest to make sure their system works.

JH: You mentioned the launch license issued by the FCC, which is a federal commission of the United States. However, space is not the property of the U.S. or any other country. Is there an international body that has a say in these matters?

SL: Five outer space treaties, established in the 1960s, 70s and 80s, do not mention space debris. Instead, there is a lot of coordination, first of all on the agency level. The Inter-agency Space Debris Coordination Committee coordinates 13 of the world's space agencies, including the ESA, NASA, the China National Space Administration, and Russia’s Roscosmos,to come up with debris mitigation guidelines, share best practices, and try to address the problem in a way that makes sense to everyone. The United Nations Committee on the Peaceful Uses of Outer Space has taken on these guidelines . This committee includes politicians from many countries, including those not currently flying in space. Industries in many countries likewise discuss these issues within the International Organization for Standardization.

So there is a lot of coordination internationally to make sure that we play by the same rules and implement the same set of standards. But right now there is no way to directly interface with any nation's sovereignty over what it launches — the outer space treaties make nation states responsible for the behavior of their individuals or private companies.

JH: What about competitors like OneWeb or Amazon, who want to set up a similar system as Starlink? Who “owns” the orbits – whoever comes first?

SL: According to the Outer Space Treaty there is no appropriation of space. But of course if you put a large constellation into a certain orbit, it means that a lot of coordination is required with anybody else who wants to operate near that constellation or even has to pass through those orbital regions. You can take this even further: If an object of a constellation fragments for whatever reason, these fragments will not remain limited to the region of the constellation itself. It will affect operators below and above. So from this perspective, putting a large number of satellites in orbit does influence the other activities that can take place.

JH: Politics and law aside, is there a physical limit of how many constellations of thousands of satellites can operate at the same time. How much space is there in space?

SL: If we don't keep the current guidelines mentioned above, we will run into the so-called “Kessler syndrome,” which is the name of this cascading effect. And at that point, there would indeed be regions that even without large constellations would become so packed with debris that it would become impractical to put your satellites there. This is why we actively promote a notion that space is a shared resource, and it's a limited resource. It is not infinite when we think about it in terms of how many objects we can put there. Exactly where this threshold is is in certain cases computable, but it depends on the behavior of operators. So you cannot say a priori that several thousand satellites are too much. That amount might be feasible, but it would need to come with stringent requirements for responsible behavior, which have yet to be demonstrated.