FLYING SAUCER OR A WEATHER BALLOON... THAT SEEMS TO BE THE ISSUE BETWEEN AN AIRLINES PILOT AND THE AIR FORCE.

THAT IT WAS PURSUING THE SAME COURSE AS HIS PLANE BUT WAS OBSCURED BY HIGH CLOUDS.

KRATOVIL SAYS HE RECEIVED A MESSAGE FROM THE AIRLINES BOSTON OFFICE QUOTING THE AIR FORCE AS SAYING THE OBJECT PROB- ABLY WAS A WEATHER BALLOON.

HOWEVER, THE PILOTS PUT IT THIS WAY:

“IF THIS IS A WEATHER BALLOON... IT’S THE FIRST TIME I EVER SAW ONE TRAVELING AGAINST THE WIND.”3

The formal explanation appears that it was a weather balloon. Is this correct?

Project Blue Book does have a record of investigation. However, it consists only of the form completed by the witness on August 3, 1954. While the UP story indicated the pilot dismissed the balloon explanation, by August of 1954, his attitude had changed. He became aware that it was not a weather balloon but a large research balloon that had been launched at 0430 from Grenier AFB in Manchester, NH. When he learned of this balloon flight, he now seemed to agree with the explanation.

Dr. James McDonald wrote the following about the case:

At 0930 EDST, a Paris-New York TWA Constellation was passing near Boston when the cockpit crew spotted “a large, white-colored disc-like object” overhead (Ref. 41). Capt. Charles J. Kratovil, copilot W. R. Davis, and flight engineer Harold Raney all watched it for a total time of 10 minutes as they flew on their own southwestward course to New York. They would occasionally lose it behind overlying clouds. Knowing that they were flying into headwinds, they concluded that it could not be any kind of balloon, so they radioed the Boston airport control tower, which in- formed him that jets were scrambled and saw the object, but could not close with it.

After landing in New York, Capt. Kratovil was informed that official spokesmen had attributed the sighting to a “weather balloon” released from Grenier AFB, in New Hampshire.6 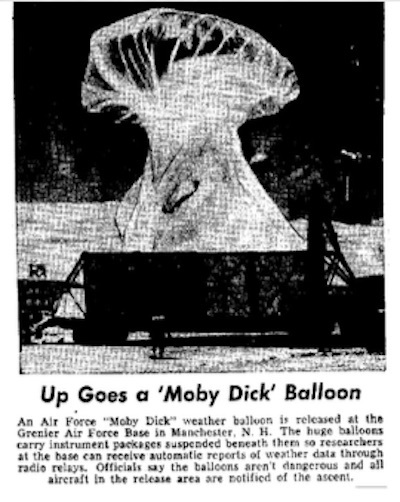 Grenier Air Force Base had been launching “Moby Dick” balloons that spring. The photograph above appeared in the Ogden high altitude research balloon. The fact that the object was also seen by ground personnel with binoculars indicated that what was seen was large and visible over a large area. A high altitude plastic balloon would satisfy these observations.

It is interesting to note that at least one more balloon launched by Grenier airfield that summer produced UFO reports that were mentioned in the news media.8 In this instance, the media identified the source. If they had not done so, these reports probably would have also appeared in “The UFO evidence”. 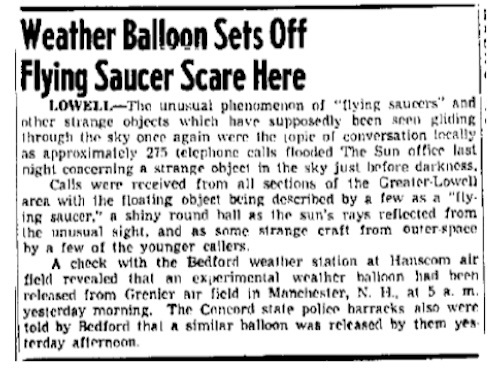 It seems very likely that the pilot saw a high altitude balloon launched from Manchester that morning. The case should be labeled “probably a balloon” and removed from the “best evidence” list.