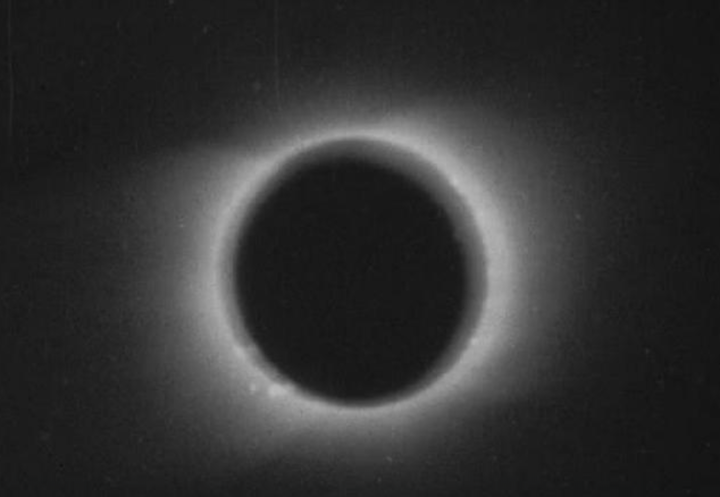 The BFI and the Royal Astronomical Society have announced the rediscovery of the earliest moving picture of a total solar eclipse from 1900. The original film fragment held in The Royal Astronomical Society’s archive has been painstakingly scanned and restored in 4K by conservation experts at the BFI National Archive, who have reassembled and retimed the film frame by frame. Available now to watch online for free, Solar Eclipse (1900) is part of BFI Player’s recently released Victorian Film collection, and viewers are now able to experience this first film of a solar eclipse originally captured over a century ago.

The film was taken by British magician turned pioneering filmmaker Nevil Maskelyne on an expedition by the British Astronomical Association to North Carolina on 28 May, 1900. This was Maskelyne’s second attempt to capture a solar eclipse. In 1898 he travelled to India to photograph an eclipse where succeeded but the film can was stolen on his return journey home. It was not an easy feat to film. Maskelyne had to make a special telescopic adapter for his camera to capture the event. This is the only film by Maskelyne that we know to have survived.

Advancement in technology and magic intermingled seamlessly in the Victorian world, where a passion for science with innovations including Marconi’s wireless telegraphy co-existed alongside a deeply held belief in the paranormal and the spiritual photography of the Society for Psychical Research. It was no coincidence that many early filmmakers and showmen including GA Smith and Walter Booth worked in magic theatres or were performing illusionists before they turned their hand to film. Nevil Maskelyne and David Devant who ran the famous Egyptian Hall, the oldest magic theatre in London’s Piccadilly, were early adopters of the new medium, introducing ‘trick’ films into the overall magic show.

On the news of this recent rediscovery Bryony Dixon, BFI silent film curator says: “Film, like magic combines both art and science. This is a story about magic; magic and art and science and film and the blurred lines between them. Early film historians have been looking for this film for many years. Like one of his elaborate illusions, it’s exciting to think that this only known surviving film by Maskelyne, has reappeared now. Harnessing 21st century technical magic, this 19th century attraction has been reanimated. Maskelyne wanted a novelty to show at his magic theatre, what better than the most impressive natural phenomenon of them all.”

Professor Mike Cruise, President of the Royal Astronomical Society said: "It's wonderful to see events from our scientific past brought back to life. Astronomers are always keen to embrace new technology, and our forerunners a century ago were no exception. These scenes of a total solar eclipse - one of the most spectacular sights in astronomy - are a captivating glimpse of Victorian science in action."

An enthusiast for film, Nevil Maskelyne styled himself as a scientific investigator of illusions, spiritualism and various phenomena, he was fascinated by astronomy and became a fellow of the Royal Astronomical Society. He wanted to show that the developing cinematograph could be used for the advancement of science. The film forms part of the astrophotography collection of the Royal Astronomical Society, which recognised the increasing importance of astrophotography, appointing a permanent photographic committee in 1887 and acting as a centre for receiving and distributing astronomical photographs for research and teaching from the 1880s to the 1970s.

Dr Joshua Nall, Chair, RAS Astronomical Heritage Committee adds: “This is a wonderful archival discovery: perhaps the oldest surviving astronomical film, it is a really striking record of both early cinema and late Victorian eclipse observing. The BFI are ideal partners, they’ve done a fantastic job digitally restoring the film and it’s great that it will be available for anyone to view free of charge as part of their trove of Victorian cinema.”

Maskelyne’s film returns to his spiritual home in Piccadilly where it will screen at the Royal Astronomical Society’s HQ on 31 May as part of an event celebrating the centenary of the 1919 eclipse as well as being available to view for free on BFI Player.