SILVER SPRING, Md., May 29, 2019 /PRNewswire/ -- CuriosityStream– the award-winning streaming and on-demand destination from Discovery Channel founder John Hendricks – launches its 50th anniversary summer celebration of the lunar landing with the world premiere 4K film Return to the Moon on June 13 and kicks off New Moon Mondays the following week on June 17. 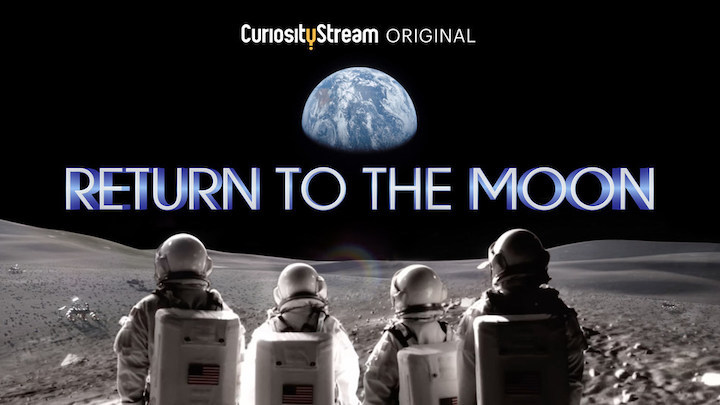 "Return to the Moon" premieres on CuriosityStream June 13th, and is available to watch any time on demand.

To honor the incredible feat of July 20, 1969 when Apollo 11 astronauts Neil Armstrong and Buzz Aldrin became the first humans to land on the moon, CuriosityStream's original film Return to the Moon shares the legacy of that momentous achievement with the story of today's global sprint to take mankind back to the moon and the innovative technology needed to colonize and explore beyond it. New Moon Mondays delivers fascinating space documentaries, expert insights and unique analysis and stories from the Apollo 11 mission through a partnership with Sugar Films and Draper Lab's wehackthemoon.com.

"The moon has recaptured the world's attention and the golden anniversary of man's first steps on it is the perfect opportunity to deliver new cutting-edge space and science content to our insatiably curious audience," said CuriosityStream President and CEO, Clint Stinchcomb. "Return to the Moon and New Moon Mondays celebrate the groundbreaking heroes of 50 years ago alongside the bold pioneers and revolutionary technology of today that will take mankind into our universe and beyond."

Suddenly a center of intense focus, the moon is a magnet for money and minds. Return to the Moon explores the new global space race to return people to the moon and how, in the coming decades, humans will colonize it and exploit resources like the game-changing power source Helium-3. From the private companies SpaceX and Blue Origin, to global super powers China, Russia, the European Union and the United States, the most powerful individuals and nations on Earth are determined to conquer the moon and use it as a base to explore the stars.

Viewers can also join the space adventure this summer as CuriosityStream celebrates the anniversary with New Moon Mondays featuring the premiere of Hack the Moon: Unsung Heroes of Apollo on June 24. Created in partnership with Sugar Films and Draper Lab's wehackthemoon.com, Hack the Moon: Unsung Heroes of Apollo reveals the little-known stories of the engineers and scientists who made the first moon landing possible. In addition, former NASA rocket scientist and CuriosityStream's brand ambassador for all things space, Kevin J. DeBruin, provides CuriosityStream fans with expert insight on spacecraft, cosmic worlds and the universe's most sought-after secrets through social media and direct fan interactions. New Moon Mondays also features extraordinary documentaries on space exploration including Living Universe, Space Probes, Lunar Rover, The Apollo Moon Landings and Mystery Signals from Space.

Hack the Moon: Unsung Heroes of Apollo is a collaboration with Sugar Films and CuriosityStream. For Sugar Films, Sue Norton is supervising producer.  For CuriosityStream, Steve Burns is chief content officer and Rob Burk is executive producer.

To watch Return to the Moon on June 13 and any time after, visit  https://curiositystream.com/returntothemoon/  and start a free trial.

Launched by Discovery Communications founder and media visionary John Hendricks, CuriosityStream is the award-winning documentary streaming and on-demand service where viewers of all ages can fuel their passions and explore new ones. Our shows and series cover every topic from space exploration to adventure to global food and culture with stunning visuals and unrivaled storytelling to demystify science, nature, history, technology, world, people, current events and lifestyle. With over 2,400 titles, many in Ultra HD 4K, including exclusive originals, CuriosityStream is available worldwide to watch on TV, desktop, mobile and tablets. Find us on the web and via Roku, Apple TV and Apple TV Channels, Xbox One, Amazon Fire TV, Sprint TV and Google Chromecast, iOS and Android, as well as Amazon Prime Video Channels, YouTube TV, Sling TV, DISH TV, VRV, Comcast Xfinity on Demand, Cox Communications, Layer3 TV, Sony, LG, Samsung and VIZIO smart TVs, and other platforms and global distribution partners.

Founded in 2006 by Executive Producers Louis Tarantino and Douglas Cohen, Flight 33 is a leading producer of science and history programming. The company has recently completed a string of major specials for CuriosityStream—Deep Time History, Miniverse, and Return to the Moon. Previous productions include the long-running space series The Universe and the iconic History Channel special Life After People, which garnered 3 Emmy nominations and spawned a hit series. Flight 33's special A Distant Shore: African Americans of D-Day was recognized with an Emmy for Outstanding Historical Program. Other productions include: Doomsday: 10 Ways the World Will End, Big History with Bryan Cranston, History of the World in 2 Hours, Deadliest Space Weather, and Secrets of the Earth.  Flight 33 is based in Los Angeles.

Sugar Films is an award-winning content production company with offices in Cardiff, London and Boston, producing scripted and non-scripted content for modern, mainstream and diverse audiences on television, digital and social platforms. 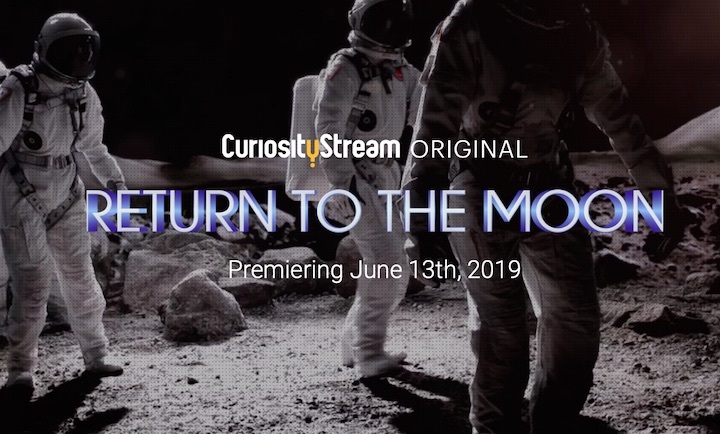 About Return to the Moon

The moon is suddenly a center of attention again; a magnet for money and minds. From the private companies SpaceX and Blue Origin, to China, Russia, the European Union and the United States — the most powerful individuals and nations on Earth are determined to conquer the moon and use it as a base to explore the stars. The CuriosityStream original series Return to the Moon tells the story of today’s global sprint to take man back to the moon... and beyond. In the coming decades, we will colonize the moon and exploit resources like the game-changing power source Helium-3. Join the adventure this summer as we celebrate the 50th anniversary of mankind's first step on the moon.... and look ahead to the possibilities.

Raumfahrt - CuriosityStream Celebrates 50th Anniversary of the Lunar Landing this Summer With World Premiere of "Return to the Moon" and "New Moon Mondays" Featuring Content, Experts and Partners
1529 Views
Created with page4