Astronomers believe planets like Jupiter shield us from space objects that would otherwise slam into Earth. Now they’re closer to learning whether giant planets act as guardians of solar systems elsewhere in the galaxy.

A UCR-led team has discovered two Jupiter-sized planets about 150 light years away from Earth that could reveal whether life is likely on the smaller planets in other solar systems.

“We believe planets like Jupiter have profoundly impacted the progression of life on Earth. Without them, humans might not be here to have this conversation,” said Stephen Kane, lead study author and UCR associate professor of planetary astrophysics. “Understanding how many other stars have planets like Jupiter could be very important for learning about the habitability of planets in those systems.”

Along with liquid water oceans, Kane said astronomers believe such planets have the ability to act as ‘slingshots,’ pulling objects like meteors, comets, and asteroids out of their trajectories en route to impact with small, rocky planets.

Many larger planets have been found close to their stars. However, those aren’t as useful for learning about the architecture of our own solar system, where the giant planets including Saturn, Uranus and Neptune are all farther from the sun. Big planets far from their stars have, until now, been harder to find.

A study recently published in the Astronomical Journal details how Kane’s team found success in a novel approach combining traditional detection methods with the latest technologies. 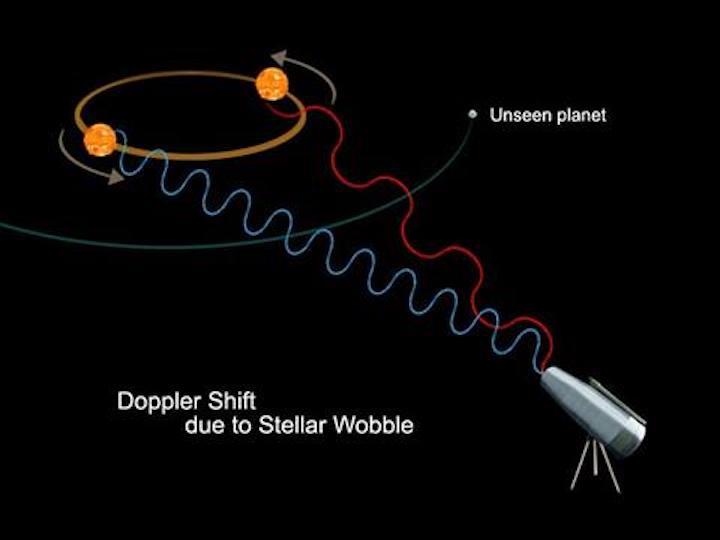 The “wobble” technique: blue wave shows movement toward Earth and the red occurs as the star heads away. (NASA/JPL-Caltech)

One popular method of searching for exoplanets — planets in other solar systems — involves monitoring stars for “wobble,” in which a star moves toward and away from Earth. The wobble is likely caused by the gravitational pull a nearby planet is exerting on it. When a star wobbles, it’s a clue there may be an exoplanet nearby.

When the planet is far from its star, the gravitational pull is weaker, making the wobble smaller and harder to detect. The other problem with using the wobble detection method, Kane said, is that it just takes a long time. Earth only takes a year to orbit the sun. Jupiter takes 12, Saturn takes 30, and Neptune takes an astonishing 164 years.

The larger exoplanets also take many years to circle their stars, which means observing a complete orbit could engulf an astronomer’s entire career. To accelerate the process, Kane and his team combined the wobble method with direct imaging. This way, if the team thought a planet might be causing wobble, they could confirm it by sight.

Obtaining a direct image of a planet quadrillions of miles away is no simple task. It requires the largest possible telescope, one that is at least 32 feet long and highly sensitive. Even from this distance, the light of the stars can overexpose the image, obscuring the target planets.

The team overcame this challenge by learning to recognize and eliminate the patterns in their images created by starlight. Removing the starlight allowed Kane’s team to see what remained.

“Direct imaging has come a long way both in terms of understanding the patterns we find, and in terms of the instruments used to create the images, which are much higher resolution than they’ve ever been,” Kane said. “You see this every time a new smartphone is released — the camera detectors are always being improved and that’s true in astronomy as well.”

In this project, the team applied the combination of wobble and imaging method to 20 stars. In addition to the two being orbited by giant Jupiter-like planets that had not been previously discovered, the team also detected a third, previously observed star with a giant planet in its system.

Going forward, the team will continue to monitor 10 of the stars where planetary companions could not be ruled out. In addition, Kane is planning a new project to measure how long it takes these exoplanets to complete rotations toward and away from their stars, which cannot currently be measured.

Kane’s team is international, with members at the Australian Astronomical Observatory, University of Southern Queensland, University of New South Wales and Macquarie University in Australia, as well as at the University of Hertfordshire in the United Kingdom. They are also spread across the U.S. at the National Optical Astronomy Observatory in Tucson, AZ, Southern Connecticut State University, NASA Ames Research Center and Stanford University in California and the Carnegie Institution of Washington in D.C.

“This discovery is an important piece of the puzzle because it helps us understand the factors that make a planet habitable and whether that’s common or not,” said Kane. “We are converging rapidly on answers to this question that the past 3,000 recorded years of history could only wish they had available to them.”