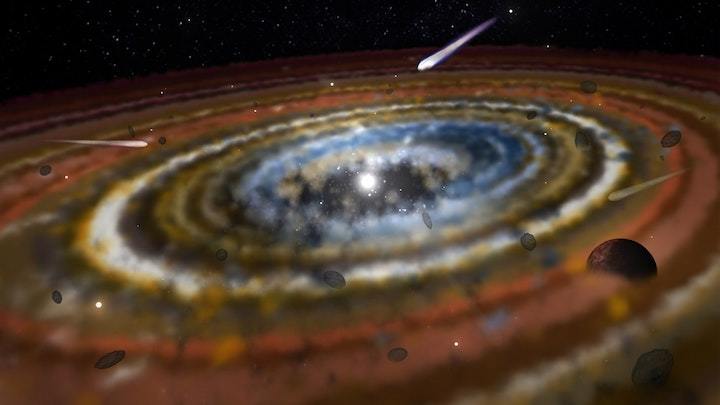 Just one year after its launch, NASA’s Transiting Exoplanet Survey Satellite (TESS) has detected its first comets orbiting a star other than the sun.

In results soon to be published in the journal Astronomy and Astrophysics, researchers led by Konstanze Zwintz and Sebastian Zieba at the University of Innsbruck in Austria reveal the discovery of three comets orbiting a star called Beta Pictoris, about 63 light-years away from Earth.

The main mission for TESS is the detection of exoplanets. Discovering that the information it beams back to Earth is detailed enough to allow the identification of comets – much smaller bodies – is regarded as a very useful bonus.

“The data showed a significant decrease in the intensity of the light of the observed star,” the scientists write.

“These variations due to darkening by an object in the star's orbit can clearly be related to a comet.”

The discovery follows the detection of three other comets, each orbiting different stars, by researchers trawling through archived data gathered by NASA’s Kepler Space Telescope.

Zwintz suggests there are a couple of reasons to suspect TESS will turn out to be a much more efficient comet-hunter.

“The space telescope Kepler concentrated on older stars similar to the sun in a relatively small area in the sky,” he says.

“TESS, on the other hand, observes stars all over the sky, including young stars. We therefore expect further discoveries of this kind in the future.”

It is fitting that the satellite’s first exocomets should be found around Beta Pictoris, because the young star – estimated to be only about 23 million years old – has long featured in astrophysical discourse and is regarded as something of a celebrity among scientists.

“Already in the 1980s, investigations of Beta Pictoris provided convincing evidence for planetary systems around stars other than our sun – a decade before exoplanets were even discovered for the first time,” says Zwintz.

“In addition, there was already indirect evidence for comets at that time based on the characteristic signature of evaporating gas coming off them.”

In 1999, astrophysicists Alain Lecavelier des Etangs, Alfred Vidal-Madjar and Roger Ferlet upped the ante and boldly predicted that it would have comets orbiting it.

Two decades later, Zwintz acknowledges, their prediction has been confirmed.