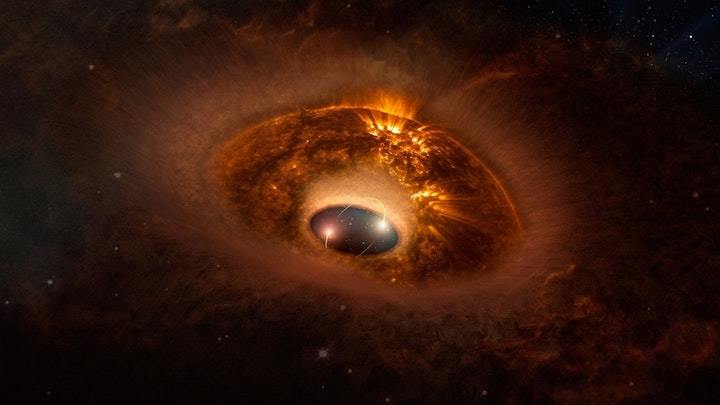 Is a Jupiter-sized gravitational wave emitter positioned somewhere near a massive black hole?

A minor change to interferometer parameters might reveal the Earth is not alone. Andrew Masterson reports.

With only a small technological tweak, the European Space Agency’s planned Laser Interferometer Space Antenna (LISA), scheduled for launch in 2034, could do double-duty as a detector for signals broadcast by advanced extraterrestrial civilisations, a team of physicists suggests.

LISA will comprise three spacecraft, arranged in a triangular formation, 2.5 million kilometres apart. It is being designed to function as an enormous, orbiting gravitational wave detector.

A minor change to its operating procedures, say researchers led by Marek Abramowicz of Sweden’s University of Gothenburg, could see it play a pivotal role in discovering the existence of at least one technologically advanced civilisation existing somewhere in the Milky Way.

However, the suggestion, currently posted on the academic preprint server arXiv, rests on a single critical assumption – an exercise in second-guessing ET.

Acknowledging that life on Earth in general, and humanity in particular, arose from “a rare combination of circumstances”, Abramowicz and colleagues concede that similar constraints must restrict the chances of other technologically savvy civilisations arising.

The chance of that happening, though, they state, is non-zero, and so they opt for a possibly generous interpretation of the Drake Equation – a method developed in 1961 to estimate the number of communicative alien societies in the universe – and suggest that the Milky Way galaxy might host a couple.

If this is the case, they continue, it’s useful to assume that at least one of them is considerably more technologically advanced than humanity.

Long before it reached such an exalted state, however, it would have passed through a degree of astrophysical understanding roughly equivalent to the one humans have reached in the past few decades – figuring out that black holes exist and, very specifically, there is a very big one right in the centre of the galaxy.

Black holes, of course, as well as neutron stars, are intimately tied up with the production of gravitational waves. Sagittarius A* (or Sgr A*), the massive black hole in the middle of the Milky Way, is also, by definition, the centre of the local star region – a spot, Abramowicz and colleagues say, towards which any advanced ET in the area will eventually and naturally look.

Thus, the researchers suggest, making some assumptions about alien life and thought, right next to Sagittarius A* – at the hole’s innermost stable circular orbit (ISCO), in fact – would be a perfect place to place a beacon broadcasting a message to the rest of the galaxy.

Such a device, the reasoning continues, would send its message using gravitational waves, because “once emitted, [they] travel through space virtually unperturbed”.

“Gravitational wave phenomena are omnipresent in the universe and with sufficient technological prowess relatively straightforward to detect,” the authors write.

The same omnipresence, in a sense, will be a quality of the LISA detector. Its enormous size means that it will be able to detect gravitational waves coming from anywhere, in any direction. It will not be restricted to monitoring only one segment of the universe.

The researchers dub their hypothetical alien craft “The Messenger”. To be recognised as consciously fashioned in origin, they note, the gravitational waves it emits must be “unambiguously artificial”.

Of course, positioning anything close to a bloody big black hole is a proposition fraught with danger. Abramowicz and colleagues assume, however, a considerable degree of technological prowess on the part of the extraterrestrials. Indeed, they suggest, sending a grav-wave message may only be a secondary function of the craft.

“We argue that if a sophisticated extraterrestrial civilisation would decide to construct a device to study the massive black hole in the Galactic centre, or to extract energy from it, or even for intentions unfathomable to the human mind, this device can … also serve as a Messenger,” they write.

It would, of course, have to be a robust and hefty sort of thing, otherwise it would just get sucked straight in. On the other hand, economics (which, like the structure of a hydrogen atom, may well be subject to the same forces across the galaxy) imply that there is also an upper limit.

“In order to generate a reasonably strong gravitational-wave signal, the body orbiting Sgr A* must have a mass in an astronomical range,” the author explain.

“It cannot be too small or it does not produce a gravitational-wave amplitude detectable over a substantial distance for Sgr A*, and it cannot be too big or it will cost too much energy to sustain it over a sufficiently long time.”

At length, and showing their calculations, the researchers conclude that the Messenger would need to be roughly the size and mass of Jupiter. That way, they suggest, it will carry enough fuel to be able to correct for the inwards pull of the black hole for a couple of billion years.

It’s a conclusion, however, that carries with it the seeds of its own disappointment.

“Nobody knows how long a technically-advanced civilisation lives, but it is likely that their lifetime is significantly shorter than a few billion years,” they write.

Spending several million extra dollars to carefully recalibrate LISA to be sensitive to the sort of unnaturally modulated gravitational wave signature Abramowicz’s beacon might emit, therefore, might eventually produce a finding that is simultaneously amazing and awful.

“Thus, the lifetime of the Messenger will be much longer than that of the civilisation that created it,” the researchers write.

“If we ever discover the gravitational signal discussed here, it will possibly be a message from a dead civilisation.”